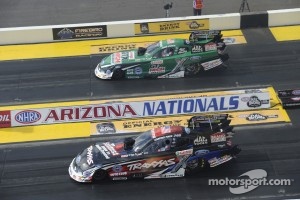 GAINESVILLE, Fla. (March 5, 2012) – In an effort to continue living out her dream of being a successful race car driver, Courtney Force is beginning to find herself in the midst of a media whirlwind. The Automobile Club of Southern California’s Road to the Future Award candidate grabbed everyone’s attention when she won her first professional round of drag racing at the Winternationals in Pomona this year and then amazed many when she stormed into the semifinals at Phoenix Firebird Raceway after beating father John Force in their first ever match-up.

“Going to the semifinal round in only the second race of my rookie season is definitely not how I expected the season to start. I tested hard all last season and as a new driver I'm obviously still learning each time I'm in the seat of my Traxxas Ford Mustang Funny Car, but my main goal going into each event was to just focus on getting qualified. Once I was qualified, going into first round on race day seemed surreal, but I was more relaxed. I didn't feel any real pressure because I had accomplished what I had set out to do, which was to just qualify at each event and go from there. I've only been beat by my teammates so far so that has given me even more drive. I can learn from them and any mistakes I make in order to become a better driver, and hopefully put it to the race track,” said Force.

While media and fans alike swell up around her, Force keeps her cool and doesn’t let anything get to her. If anything, the involvement is inspiring.

“It's definitely been a little stressful at each event. I have amazing sponsors behind me that keep me driven and they have faith in me as a driver, and I couldn't ask for anything else. Having Traxxas, Castrol, Ford, Auto Club, BrandSource and Mac Tools on board has made me a determined driver and although there is a little pressure, I'm just out there to have fun and learn through my experience as a rookie driver,” said Force

Force has big shoes to fill following in the footsteps of older sister Ashley Force Hood, and she’s doing just that.

“I remember when Ashley went through the transition into a professional category. She was gone all the time traveling, doing appearances, radio and television interviews, etc., but I always thought it was cool. The fact that she was a good enough driver to be noticed and have people want her interview I thought was amazing, or maybe I was a little envious. More than anything, I was proud of my big sister because she had a lot of pressure on her and she handled it so well while continuing to be the same humble sister that I know, which is very inspiring. I look up to her in so many ways, not just in drag racing. Now that I'm making the same transition, I always think of how Ashley has gone through the same stress and nervousness as I am going through, and it always helps keep me composed. I try to enjoy all of it. It can be a little overwhelming, but it comes with the job,” said Force.

The youngest of the Force-sister quartet is participating in an Orlando NHRA Media Tour this week and will go straight from the busy tour into her third race weekend at Auto Plus Raceway at Gainesville for the 43rd annual Tire Kingdom Gatornationals, March 9-11.

“The last two races I have had a very consistent car which makes me feel confident going into Gainesville. Once again, my focus will be to get my Traxxas Mustang Funny Car qualified and then I'm going to focus on a first round win and go from there! This is going to be an extremely busy week with the NHRA media tour in Orlando before the race, but we have amazing fans that come out to Gainesville every year so I'm excited to get out there, meet the fans and take my car down the racetrack,” said Force.

With the help of Castrol, Ford, Traxxas, Auto Club, Mac Tools, BrandSource and Freightliner, John Force Racing drivers have all gotten the season off to a great start. Mike Neff, Robert Hight and John Force hold the 1, 2 and 3 points positions, while the rising star occupies the sixth spot, one point behind Ron Capps. Some say it will be no time at all before she will be tackling a race win.

“I would definitely like to get my first win sometime this season, but anything can happen. Every track is different and sometimes the car just doesn't want to agree. So far my car has been consistent which is great for me as a driver, but I'm just hoping we can continue to make great decisions each run while stepping the car up and trying to make it quicker. I would love to get a win soon, but I'm going to take this round by round and hope for a great race weekend,” added Force.