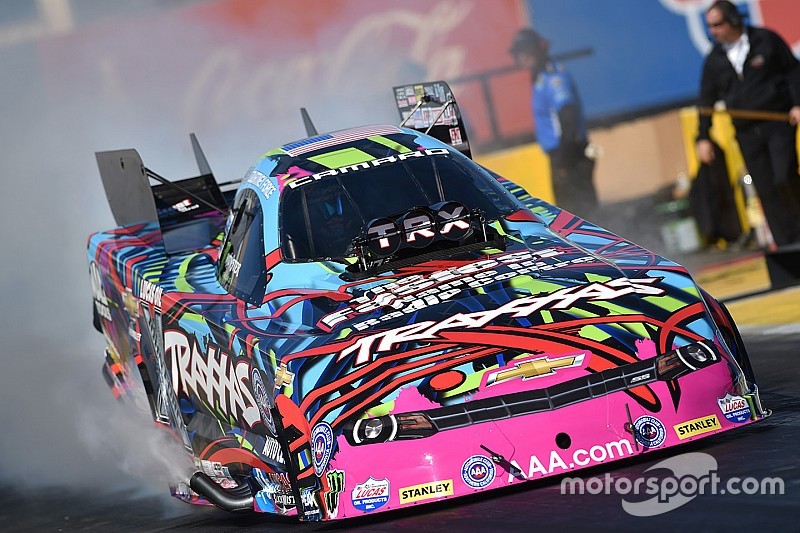 Instead, Force was dealt her most trying and frustrating season in her young NHRA Mello Yello Drag Racing Series career. Finding bumps in the road at almost every turn, Force failed to win a race and just missed qualifying for the Mello Yello Countdown to the Championship playoffs.

Now an off-season removed from a year of disappointment on the track, Force is ready to rebound in a major way in her 10,000-horsepower Traxxas Chevrolet Camaro. She has put the 2015 frustrations behind her and has high hopes in 2016, starting with this weekend’s tradition-rich 56th annual Circle K NHRA Winternationals at historic Auto Club Raceway at Pomona

“Last season was a rough one for us,” said Force, who also finished a career-best fourth in points in 2014 thanks to the four victories. “We had many hurdles that we couldn't seem to overcome, but took it as a learning experience for us. We took away from it a positive attitude going into the 2016 season and we are motivated to get back on track.”

... we are definitely excited going into the season opener to see what our Traxxas Chevy Camaro can do.

Shawn Langdon (Top Fuel), Matt Hagan (Funny Car) and Jason Line (Pro Stock) were last year’s winners of the race that will be televised nationally on Fox Sports 1 (FS1), including live coverage of Sunday’s finals at 5 p.m. (ET). The revered event, the first of 24 in 2016, kicks off a thrilling new era in the NHRA, and Force is ready to start fresh herself this season.

Unable to find any rhythm over the course of the difficult year, Force finished 11th in points and lost 15 times in the first round. When one bad thing happened, it seemed to snowball, and Force and her team never recovered. But the entire group has worked hard to find the solution in 2016, with a couple of new pieces joining Force’s Funny Car team.

The results have been immediate, including a solid test session last weekend in Phoenix, and Force has been impressed with how her team has rallied together to bounce back this year.

“We of course have the support of Traxxas as well as a few other sponsors who came on board with our teams last year and that is giving us that stability we need to do what we love,” Force said. “On top of this we made a few changes on our team and (we) now have Dan Hood and Ronnie Thompson as co-crew chiefs and a couple new crew members on board. After our test session in Phoenix this past weekend, and putting some good numbers on the board, we are definitely excited going into the season opener to see what our Traxxas Chevy Camaro can do.”

A quick start in Pomona would do wonders for her confidence, but Force feels as though she came out of 2015 stronger in a number of areas.

Plus, Force, who won the Automobile Club of Southern California Road to the Future award in 2012 as the top rookie, knows she’s capable of competing at a high level in the loaded Funny Car class. Force’s standout 2014 season made her the winningest female in Funny Car history, and one of her wins that year gave her the historic 100th victory for a female driver.

But there were plenty of lessons last year that should help Force in the long run.

“I think I've become mentally stronger as a driver going into my fifth year of racing and have learned through all the ups and downs,” Force said. “I think any mistake you make as a driver is only for the better and you can take so much away from that if you choose to look at it with a positive attitude, and that's what I'm doing this season.”

That positive attitude means Force is eager for Pomona to arrive. With a successful test session in hand and a solid off-season, Force is ready to throw her name back into the hat of championship contenders.

“The off-season feels way too long being out of the seat,” Force said. “Especially after getting back in the cockpit at testing I can't wait to get back in the swing of things at the start of the season, at my home track in Pomona. I think 2016 will be a great year for our Traxxas Chevy Camaro team and we are ready to make it our year.”