Countdown to the Countdown at Brainerd 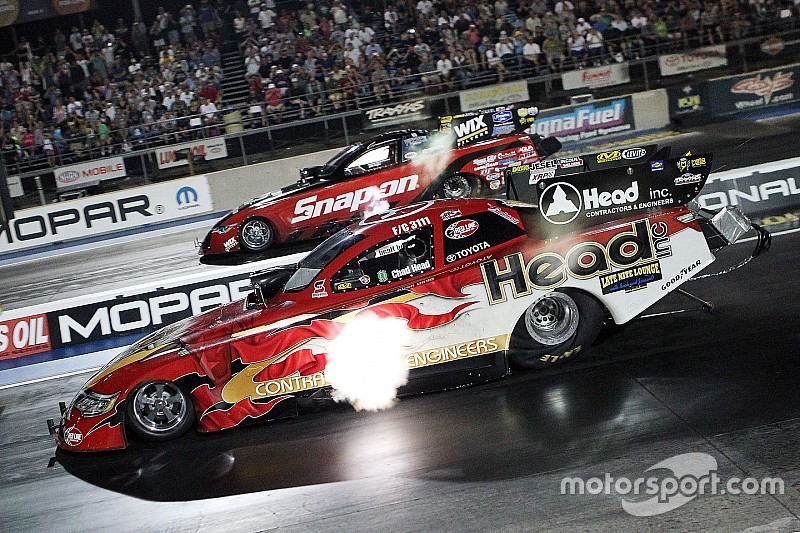 Final places and desperately needed points are on the line in the penultimate race before the Countdown to the Championship begins. Annie Proffit looks ahead.

Race 17 of 24 in NHRA’s Mello Yello Drag Racing Series takes place this weekend at Brainerd International Raceway. The Minnesota track is known for having some wild patrons who consider this event their final opportunity to party before fall and school set in. The parties are nearly as legendary as the three days of racing for both professional and amateur drag racers. Records have been broken here; as have the desires of racers trying to ascend to the top of their categories.

In addition to vying for Wally trophies for this 35th annual Lucas Oil NHRA Nationals on the Brainerd dragstrip, two of the four professional categories will complete the rained-out race from two weeks ago in Seattle.

The Pro Stock finals are being held at Indianapolis on Labor Day weekend as contender Aaron Strong is not competing in the Minnesota event; Vincent Nobile, the man Strong will try to defeat for the Seattle crown, will benefit from having added laps at Brainerd.

Two Funny Car drivers, Alexis DeJoria and Courtney Force, suffered similar accidents at Sonoma and Seattle, respectively, but while Force will be back in her John Force Racing Camaro this weekend, DeJoria’s pelvic injury leaves her on the sidelines.

That presents on a silver platter the opportunity to Chad Head and Cruz Pedregon to bump her out of the Top 10 and that’s crucial because the Brainerd contest is the penultimate race before the Countdown to the Championship six-race playoff ensues. The U.S. Nationals are the final opportunities for drivers to make the 10-driver/rider Countdown playoffs.

Courtney Force, currently second in points behind Capps despite a single win, has been a paragon of consistency throughout the regular season and has already made the Countdown behind Capps, along with Jack Beckman, Worsham, Matt Hagan, teammates Robert Hight and her father John all locked in.

The contenders are 2013 champ Shawn Langdon, Richie Crampton, Clay Millican and Leah Pritchett, currently holding seventh through tenth-place points. Nipping at their heels are Terry McMilen, who lies just 19 points behind Pritchett, currently driving for Don Schumacher Racing under the wise tutelage of Todd Okuhara, who recently took over the tuning duties from Mike Guger. Scott Palmer is 12th and Troy Buff is 13th, but they’d have to really whip it up over the next two races as both are more than 200 points outside tenth place.

Only four drivers have qualified for the Countdown to the Championship playoffs in Pro Stock, with Chevrolet Camaro drivers Jason Line and Greg Anderson pacing the field, thanks to their seven wins each thus far in the season. Their Summit Racing teammate Bo Butner has qualified, as has Allen Johnson, thanks in part to his win at Bandimere outside Denver.

The changes to Pro Stock, which went from carbureted to fuel injected machines and was dealt a 10,500-rpm limit this year (in some cases down from near 12,000rpm), has stymied just about everyone except the Summit Racing trio. Still, Alex Laughlin and his Camaro are only nine points out of tenth place and hounding Enders for that position.

The situation for Pro Stock Motorcycle is also wide open as the series heads for Minnesota. Only three riders are in the playoffs, with Eddie Krawiec and teammate Matt Hines leading the way with their Vance & Hines Screamin’ Eagle Harley-Davidson bikes. Three-time champ Angelle Sampey, riding a Buell is third, thanks to her win earlier this year. Only one other rider has secured a win and that’s LE Tonglet, who is in fifth place behind Jerry Savoie. Both of those riders have Suzuki motorcycles.

The balance of the top ten are Hector Arana, Chip Ellis, Matt Smith, Hector Arana Jr and Steve Johnson. Of this quintet, only the venerable Johnson rides a Suzuki; the balance ride Buells, except for two-time champ Matt Smith on a Victory motorcycle. Michael Ray (Buell) is only six points behind Johnson, Karen Stoffer lags by 25 points on her Suzuki and Cory Reed’s Buell is only 51 points back.

At this moment, the weather forecast calls for cool temps with a chance of showers on Saturday only. Beyond that, overcast and cloudy skies should prevail, which could be great tuning weather, particularly for Friday night’s second session. Of course NHRA is scheduling the Seattle finals for Saturday’s first session, which will be at 1:30pm, provided everything goes to plan at the track. Top Fuel would go first and then Funny Car, which is the normal procedure for the third and fourth sessions of qualifying.

Hagan earns No. 1 spot with world record performance at Brainerd