Can any NHRA ace gain an edge in Texas? 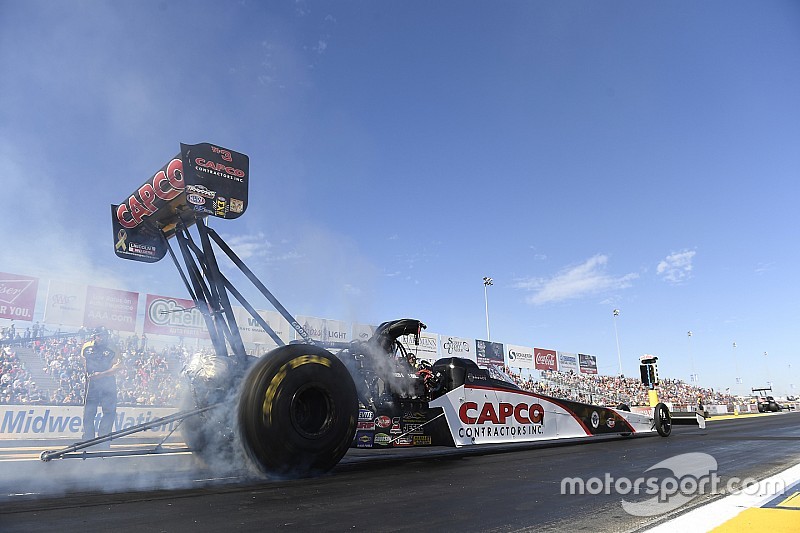 Just three of the 24 races remain in the 2017 NHRA Mello Yello drag racing season and across all four classes tensions are high, every point counts and consistently quick runs are at a premium. Anne Proffit previews the Texas action.

There are three races done and three to go in the Countdown to the Championship as teams hit the Texas Motorplex, south of Dallas, for the AAA Texas NHRA FallNationals. Whatever happens here and in Las Vegas at the end of the month sets the scene for the season finale in Pomona, which takes place November 9-12. With 1.5 points for the finale, these two races are setups for No. 24, which will likely anoint winners at the last possible moment.

But still, there’s plenty to consider as the transporters pull into the pits and prep for Friday and Saturday’s two daily qualifying sessions and Sunday eliminations. With hot days forecast for preliminary events and a big drop in temps and overcast skies on the agenda (at this writing, anyway) for Sunday, crew chiefs, tuners and drivers will have to exercise all of their skills to tame this tough track.

The all-concrete Texas Motorplex is, according to Stringer Performance Top Fuel racer Clay Millican, “The original super track; it’s stacked with so many memories. This is the track where Eddie Hill made the first Top Fuel dragster pass in under four seconds,” he recalled about the Texan’s historic run to 1320 feet.

Even though he’s won eight races in this 24-event campaign, including the most recent at St. Louis, Texan Steve Torrence isn’t in the clear for his first Top Fuel championship with the CAPCO Contractors dragster. He’s got only 32 points in hand against single race winner Doug Kalitta of Kalitta Motorsports entering the Dallas race.

Torrence has to contend with seven drivers who have a serious chance of stealing the title from him: John Force Racing’s Brittany Force (2 wins), reigning titleholder Antron Brown (4) of Don Schumacher Racing, single race winners Millican and Tony Schumacher (DSR), along with Leah Pritchett, who has picked up four Wally trophies this year, yet is 152 points behind Torrence.

Torrence’s father Billy is racing in a tough 17-car Top Fuel field at the Ennis track and, as anyone that knows NHRA competition realizes, anything can happen when two cars come to battle at the Christmas tree. Steve Torrence has had a consistently hot hand throughout the season but any one of his competitors could usurp his actions this weekend.

Mild temps are forecast for Friday night, so there’s always the chance to see national records, something Millican is hoping to accomplish for the second time this year, after setting the national ET and speed records of 6.631 seconds at 330.39mph (in St. Louis) for his class. Millican’s plan since Indy ended the regular season hasn’t changed: “Go for the best elapsed time every session and collect all the bonus points we can. We’ve learned that, on race day it doesn’t matter how fast you go down that track. You could still lose on a holeshot,” he said.

In Funny Car, reigning titleholder Ron Capps of Don Schumacher Racing has eight wins on the season including St. Louis two weeks ago, yet has to contend with four other drivers who could steal the title from him. By virtue of his consistency throughout the year and his three event wins, John Force Racing’s Robert Hight holds down second place, just 46 points behind Capps. Despite zero victories, Courtney Force’s consistency and high-powered qualifying results throughout the year have her third, while DSR’s Matt Hagan and Jack Beckman know this is the race where they must step up in order to claim another title.

This will be a Dodge Charger R/T versus Chevrolet Camaro SS battle down to the finale, with the balance of the field trying to keep up. However, with a 19-car entry for race No. 22, there won’t be much clarity in the Funny Car championship until after this race. On race day, it would be silly to discount the efforts of Kalitta Motorsports’ J.R. Todd, a double race winner with his Toyota Camry or ninth-placed Tim Wilkerson, who has the added benefit this week of racing with his son Daniel, who will carry the colors of Summit Racing Equipment on the identical Ford Shelby Mustang to his father.

The weekend also marks the penultimate stop for Alexis DeJoria’s Free Mammograms for the Fans program, which the Texas resident has promoted since 2013. After announcing earlier in the week that 2017 will be her final season behind the wheel of a Kalitta Motorsports-fielded Toyota Camry, DeJoria is pumped to go out with at least one more Wally in her three last appearances.

Capps, whose DSR team designated this month as OcTobler in honor of his crew chief Rahn Tobler, is on a roll with two wins in the first three Countdown contests. Tobler has focused on the team’s performance in cooler conditions; that paid off at the last two races where Capps qualified No. 3 each time. “We’re focusing on looking at what’s right in front of us. Come raceday, we know,” Capps stated, “we can run with any of these teams, especially under adverse conditions like when it’s hot.”

Pro Stock continues to be a Chevrolet Camaro class and, in particular, the top three in points are all from KB Racing/Summit Racing. Greg Anderson’s consistency, in addition to his three victories have him atop the class - by three points - from four-race winner Bo Butner and reigning champ Jason Line, who has a single victory this year.

This class, with 17 weekend entries at press time, remains exceptionally tight. It’s fair to say only five racers have a legit shot at the title, with five-race winner and rookie Tanner Gray in fourth and his teammate, four-race winner Drew Skillman in fifth, 185 points behind Anderson with their Gray Motorsports Camaros. Will this be the weekend that five-time Pro Stock champ Jeg Coughlin finally winds up in victory lane or could Allen Johnson’s final visit to Ennis be the charm for the Dodge Dart driver to earn a Wally trophy?

One thing is known, for sure: Vincent Nobile will remain in tenth place for the season as he and his team have elected to forego the Countdown and recharge for the 2018 season. As he has with the pst few races, Brian “Lump” Self will handle the driving duties in that car. Texan Alex Laughlin can’t be counted out of the possible winners as his Gas Monkey Camaro has shown good speed throughout the 2017 season.

Pro Stock Motorcycle continues to be a brand fight between the Harley-Davidson Screamin’ Eagle Street Rod of Eddie Krawiec and LE Tonglet’s Nitrofish Suzuki. Krawiec has five wins to Tonglet’s six, the most recent achieved at the last race in St. Louis and a meager 16 points in hand (Indy paid extra points and Krawiec won that race).

It’s safe to say there are still seven riders in the game in this class, with Krawiec’s teammate Andrew Hines third, Hector Arana Jr’s Buell fourth (neither one of those riders has claimed a win this year), Tonglet’s team owner and reigning titleholder Jerry Savoie (2 wins) fifth, Scotty Pollacheck and Matt Smith still in the game, the latter 140 points behind Krawiec.

All eyes are on Arana Jr., who has been very consistent throughout the season, despite losing his teammate, father Hector to injury earlier in the year. Arana is 115 points back, hasn’t had a victory since 2015 yet isn’t about to give up. “Maybe some people have written us off and that’s fine. We plan on showing everyone we’re not done fighting just yet. No question we had a bit of bad luck” after failing to advance past the first round in St. Louis, “but it’s still possible to win the championship,” he said.

As there are only three races remaining in which to earn a championship, so much is on the line, both here in Ennis, as well as at Las Vegas in two weeks and at Pomona the second weekend of November. Before a title can be claimed, though, race wins have to be earned.

DeJoria's retirement is a sad loss to NHRA and its fans