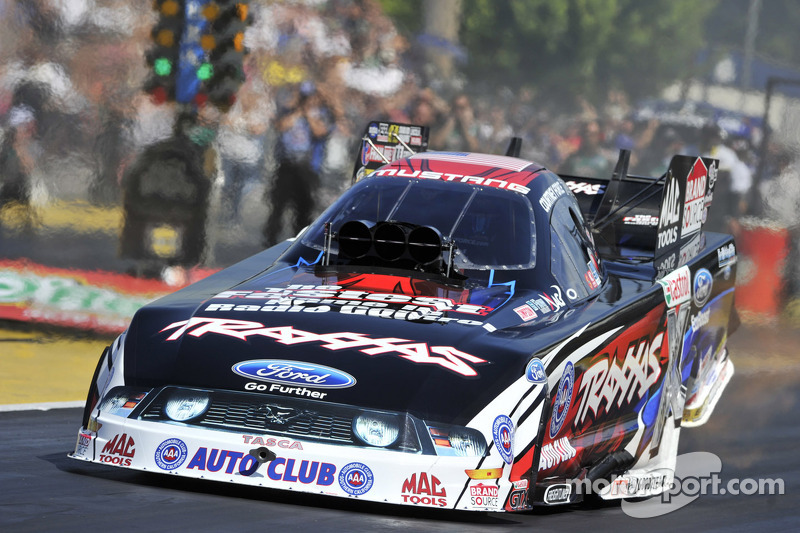 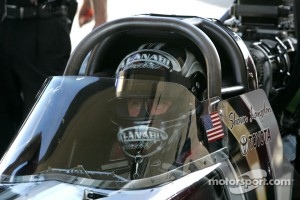 The 24-year-old rookie Funny Car driver powered her Traxxas Ford Mustang to a career- best performance of 4.049 seconds at a track record speed of 317.27 mph to take the top spot. She will face Jon Capps in the opening round of eliminations as she seeks her second win of the season and tries to win the world's most prestigious drag race.

“I wanted to take that No. 1 spot," Force said. "It’s Indy; it’s the biggest race of the season. It’s definitely a big deal. I’m so excited to say that I’ve gotten that. We just clinched a spot in the Countdown, and that’s a huge deal. It’s my rookie season, and I didn’t know exactly what to expect. If someone would’ve told me that I’d have a spot in the Countdown and qualified No. 1 for Indy, I don’t know if I would’ve believed them. This season is going better than I could’ve asked for it to be because I have a great team behind me."

Langdon claimed his second No. 1 effort of the season and third of his career by posting the fourth-quickest run in Top Fuel history near the end of the final qualifying session. Langdon covered the distance in 3.740 at 326.48 in his Al-Anabi Racing dragster and will meet Scott Palmer in the first round.

“We’ve been working on it all year, and we have a great group of guys who work on the car and understand that Alan [Johnson, team manager and tuner] will get it figured out,” Langdon said. “It’s starting to pay off now. We’re making some good runs.

“Winning here would be a great place to start. We’ve talked about trying to win a race before the Countdown just to get over that hill, and this is obviously the biggest race of the year. To get a win here would not only build confidence, but also set us on the right foot going into Charlotte for the start of the Countdown.”

In Pro Stock, Enders claimed her second No. 1 of the season and fifth of her career with a 6.550 at 210.80 in her GK Motorsports Chevy Cobalt. She will race two-time Indy winner Kurt Johnson in the opening round as she goes for her fourth victory of the season. 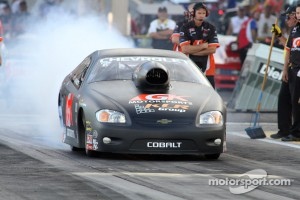 “I know that this is the biggest and most prestigious race of the year, and it’s definitely got a lot of added pressure, but my team and I have kind of kept our mindsets the same, and the fact that we’ve got to continue to be consistent, carry the momentum, qualify smart and race smart on Sunday because it’s getting to be really, really important,” Enders said. “I’m really optimistic and excited about what’s going on with our team and on the race track. We’ve got a lot of good things in the works. This is something that we’ve been working so hard on for several years, and it’s finally coming together. I’m so proud of my guys.”

Hines rode his Screamin’ Eagle Vance & Hines Harley-Davidson to his second No. 1 qualifying position of the season and 32nd of his career in Pro Stock Motorcycle as he will try to win Indy for the first time when he opens eliminations against Dawn Minturn, who is making her first career start.

“This has been one track that has been a nemesis to us,” Hines said. “We’ve had a great history here with the bonus events, the best that Pro Stock bike has had. But unfortunately we’ve never been able to find the winner’s circle here at Indy. So that’s our goal here. Our V-Rod is running very strong, and I made one of our best runs in that last session to get the No. 1 spot back. My goal was to come here and be No. 1 and win that Wally on the last day. Luckily, [my brother] Matt [crew chief] has given me the motorcycle to do it, and I think my dad [Byron, team owner] had an ear- to-ear grin on the starting line for that run, and it’s been amazing what our team has done all year long.” 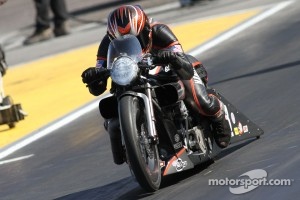 Several intriguing first round matchups are set with Countdown implications as alBalooshi and Vandergriff will meet in the opening round of Top Fuel with a possible second round match for the winner against Millican should he upset No. 2 qualifier Spencer Massey. In Funny Car, Tasca and Wilkerson will meet in the first round. In Pro Stock Motorcycle, Gann and Ray will race in the opener.