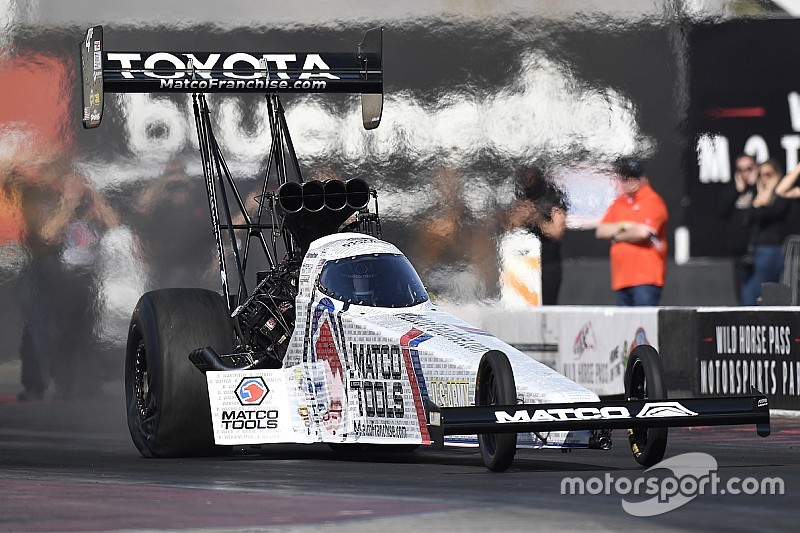 Antron Brown took his first win of the NHRA season as he triumphed at the CatSpot NHRA Northwest Nationals at Pacific Raceways, as Ron Capps and Tanner Gray also scooped victories.

Brown’s run of 3.835–seconds at 322.84 mph in his Matco Tools dragster beat Don Schumacher Racing teammate Leah Pritchett in the finals. Beforehand, he took down Shawn Reed, another DSR teammate Tony Schumacher and points leader Steve Torrence as he entered his 120th career final round.

This was Brown’s third consecutive victory at Pacific Raceways but his first victory since the 2017 event here and he became the fourth driver in NHRA history to earn 50 career Top Fuel event wins. These are in addition to the 16 NHRA Pro Stock Motorcycle wins he earned prior to his 2008 category switch.

“It is no secret that we struggled at the beginning of the year,” Brown stated. “Our main focus was one run at a time and to get better each time. But today all of the win lights turned on for our team and I couldn’t be so proud of all my guys for how persistent that they have been.

“It had been so long that I hadn’t even thought about winning 50 but now that we got that win it is just a true blessing.”

The 2016 Funny Car world champion Ron Capps used a 4.033 at 314.90 in his Pennzoil Synthetics / NAPA AUTO PARTS Dodge Charger R/T to beat points leader Courtney Force in the finals to eliminate John Force Racing's hopes of sweeping the Western Swing. Capps secured his second win of the season and fourth event victory at Pacific Raceways. “There’s a lot of good solid competition out there,” Capps said. “The main thing going through my head was to not let John Force sweep the swing in Funny Car so we put a stop to that.

“This was Rahn Tobler [crew chief] and I’s 24th event victory together since 2012 which is just crazy and I think we’re going to have a lot of success the rest of the season.”

Capps qualified ninth and took down Jonnie Lindberg, teammate Matt Hagan and Tim Wilkerson on his path to his fifth final round this season.

Tanner Gray drove to a 6.632 at 210.05 in his Gray Motorsports Valvoline Chevrolet Camaro to defeat Deric Kramer in the final round as he became the first driver in Pro Stock with four victories this year. The 2017 Auto Club of Southern California Road to the Future Award winner secured his fifth final round appearance on the 2018 season and first at Pacific Raceways.

“It is definitely my team that has gotten me to where I am today,” Gray stated. “It was tough day up on the start line and reaction times were a little bit slower here. My team worked with me through the mistakes that I’ve made but all in all it was a great day and I couldn’t be happier.

Gray qualified fourth and was able to take down Fernando Cuadra, Jason Line and Vincent Nobile on his path to victory as he locked in his position in the Countdown playoffs. Erica Enders, Nobile and No. 1 qualifier Jeg. Coughlin Jr. each joined Greg Anderson by locking in their spot in the 2018 Countdown.

* Clinched berth in NHRA Mello Yello Countdown to the Championship