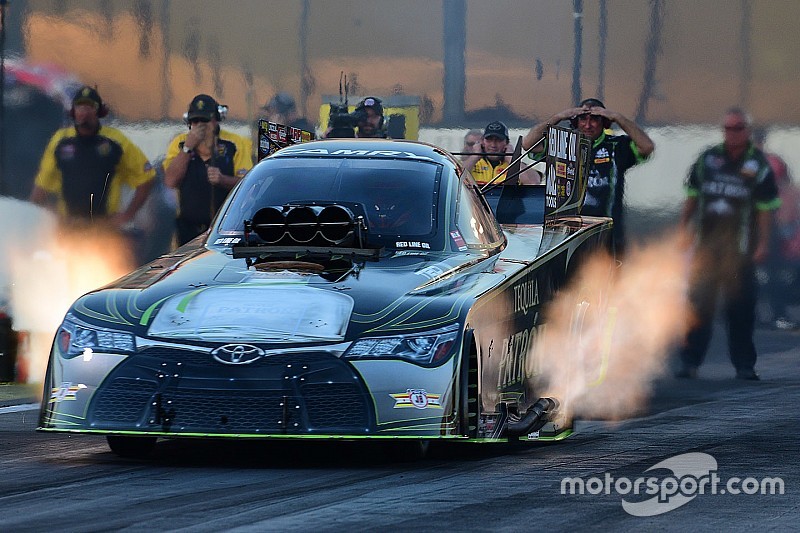 NHRA’s 2017 Mello Yello Drag Racing Series held its first two races in the Pacific southwest, traveled all the way across to Gainesville, Fla. for the third race of the season, and the first for Pro Stock Motorcycle and Pro Mods.

Two of this trio, DeJoria and Brown, are seeking their first wins of 2017, but for all three drivers, the omens are good for this weekend. It’s been a great track for Brown, who claimed the Top Fuel title here in both 2015 and 2016. Line, whose Summit Racing Chevrolet Camaro team has been the best of the best in Pro Stock’s new electronic fuel injection age, counts the Vegas track among his favorites and following his win in the spring race last year, went on to claim the title.

DeJoria unfortunately suffered a fractured pelvis at Sonoma and a concussion in the fall race at Vegas, so was unable to mount a charge against eventual Funny Car champion Ron Capps, but two of her four victories have come at this desert venue.

Despite winning the Wally last year, Line failed to double up by earning the K&N Horsepower Challenge, a race within the race that pits seven race winners and an eighth driver chosen by fans. This year that “extra” driver is Erica Enders, the two-time champion whose return from driving a Dodge Dart in 2016 to the familiar Chevrolet Camaro again in 2017 has her career back on an upswing. Line’s teammate, Greg Anderson earned his fifth K&N trophy and $50,000 cash prize in 2016.

In the first three races of the year, Top Fuel racer Leah Pritchett has performed exceptionally well, earning the first two victories of the season. Her Don Schumacher Racing (DSR) Papa John’s Pizza gold dragster was omnipotent in Pomona and Phoenix, but she came back down to earth during the Gatornationals, qualifying seventh and exiting competition in the second round.

Pritchett’s teammates Tony Schumacher and Antron Brown battled for the Florida win, with Schumacher coming out on top in an excellent side-by-side race. With his victory – Schumacher’s 83rd – The Sarge has a little more than a one-round deficit to Pritchett. Brown holds third place in points, Doug Kalitta (who defeated Pritchett at the Gators) is fourth, Brittany Force sits fifth.

There will be, at this writing, a full field of 16 Top Fuel cars on the grounds, with some of the West Coast regulars taking part. They include Troy Buff, Steve Faria and Steve Chrisman, while journeyman Scott Palmer finds himself holding 10th place points due to others’ issues and his ability to go rounds this year.

There’s a larger field for Funny Car, with 18 floppers looking to defeat defending race winner DeJoria’s Toyota Camry, which is run from the Kalitta Motorsports stable, as is the DHL Toyota Camry of J.R. Todd. But the guy everyone’s gunning for is Virginia cattle farmer Matt Hagan who, just like his DSR teammate Pritchett, won the first two races of the year. Hagan’s Dodge Charger R/T fell to rookie Jonnie Lindberg in Head Racing’s Camry at the Gatornationals but reached the semifinals.

Lindberg, whose part-time schedule includes Vegas this weekend, was making his first Mello Yello Funny Car start in Gainesville, yet it took 16-time Funny Car champion John Force to bring down the Swede in the finals. Force, driving his PEAK Motor Oil Chevy Camaro SS earned his 148th Wally trophy and his John Force Racing (JFR) team earned its 2,500 round win with the victory.

Reigning FC champion Ron Capps will be trying to erase the stigma of failing to put his DSR Dodge Charger R/T into the field at this event last year. Currently lying third in the standings behind teammate Hagan and perennial John Force, Capps is just ahead of another teammate Tommy Johnson Jr. and Force’s daughter Courtney.

Drivers and teams to watch in particular this weekend include JFR’s Robert Hight, who is now working with John Force’s former tuner Jimmy Prock, Jim Campbell in Jim Dunn’s Charger, Jack Beckman of DSR, Todd and Tim Wilkerson (Shelby Ford Mustang), all in the top 10.

The balance of the Funny Car field includes two-time champ Cruz Pedregon, who always swings for the fences and either runs the table or goes home early. His track-length wheelie in the October Las Vegas race was particularly memorable. 2015 champ Del Worsham is still acclimating to his family team’s Toyota Camry, Californians Gary Densham (Mustang) and Jeff Arend (Monte Carlo) return to competition, as do Bob Bode Jr. (Dodge), Phil Burkart Jr. (Dodge) and John Hale in a 2012 Impala flopper.

The Pro Stock contingent, led by Line, Anderson and Enders-Stevens, has only 15 entries at press time, indicating the recent difficulties the NHRA has faced in attracting teams to the factory hotrod class. The technical changes that occurred last year including electronic fuel injection, a mandated 10,500rpm rev limit and new bodywork have made this once over-subscribed category too expensive for many who formerly ran the class.

The Pro Stock winner in Florida, Shane Gray. told everyone that this year he’d be a part-timer but the Denver, NC driver and team owner, whose son Tanner is in his rookie Pro Stock year, returns for a third consecutive race in his Camaro. The most popular car in Pro Stock, Camaro entries are prevalent for all but 2012 titleholder Allen Johnson, Deric Kramer, Alan Prusiensky and Tom Huggins, who drive Dodge Darts. Dodge has pulled back a bit from Pro Stock, putting much of its energy and technology into Lucas Oil Sportsman racing.

As racers arrived at The Strip at Las Vegas Motor Speedway on Thursday, they were greeted by exceptionally high winds which are expected to drop. The forecast is for partly cloudy to clear skies throughout the weekend, with temps from the low 70s on Friday to edging on 80 degrees by Sunday. Wind is not expected to be as much of an issue, but weather will still dictate how the cars perform. Getting the tuneup right for mid-afternoon and late-afternoon qualifying sessions and a hotter day of eliminations will keep crew chiefs burning through their computer programs.

Force win prompts thoughts of Medlen and the future

Torrence, C. Force and Line are no. 1 qualifiers at Las Vegas