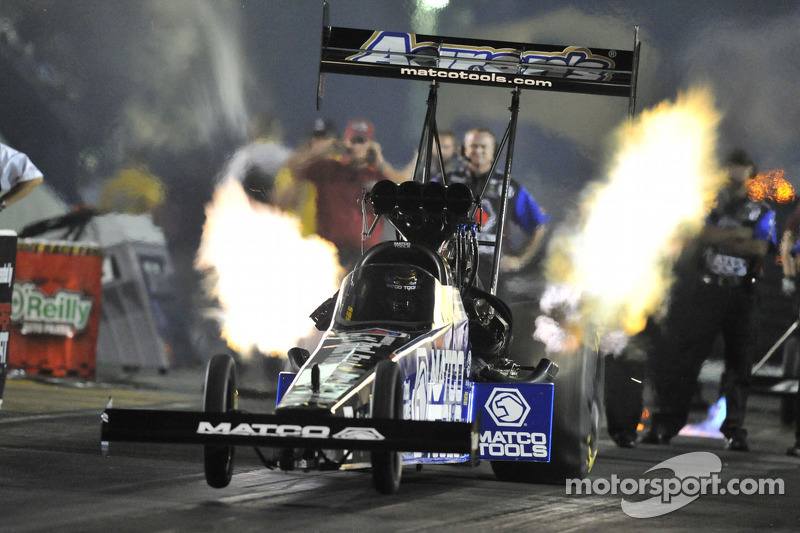 Tomorrow is going to be where all the marbles are counted.

Brown will go for his second consecutive playoff victory and his sixth win of the season from the top spot as he holds a one point lead in the Full Throttle Countdown to the Championship over playoff rival Spencer Massey, who was second in qualifying. Brown will race part-time driver Bruce Litton in the opening round.

“Tomorrow is going to be where all the marbles are counted,” Brown said. “We have a tough first round matchup. We struggled a little bit today getting our car slowed down when it got a little hotter, so we have our work cut out for us. The track has been really good, so tomorrow is going to be a good race day.”

Brown took his third No. 1 qualifying position of the season and 32nd of his career with his Friday track record performance of 3.737 seconds at 326.79 mph in his Matco Tools/Aaron’s dragster.

“Those qualifying points pay big dividends,” Brown said. “We came in here tied with Spencer, went back and forth, and came out of qualifying one point ahead. Spencer’s been trying to take my lunch money. We want every point we can get because they all add up when we come into Pomona [for the Countdown finale]. We were trying hard today to go low in each round. It didn’t go in our favor, but the .73 from last night put us No. 1.” 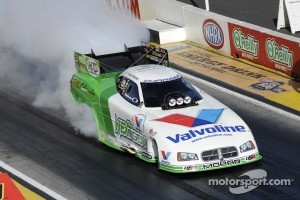 Beckman secured his third No. 1 qualifying position of the season in Funny Car with a track record time of 4.049 at 308.85 in his Valvoline NextGen Dodge Charger.

“The awesome thing about getting qualified on Friday is getting the chance to come up with your race day tune-up,” Beckman said. “Qualifying No. 1 never hurts your chances, and making two good runs today and getting to try a new supercharger should help us out. I like that we’ve been able to qualify like this on a consistent basis, but we have to convert. We have to turn this into round-wins.”

Beckman, who will race rookie Alexis DeJoria in the opening round, hopes to take advantage of his top qualifying effort during eliminations so he can improve on his third place points position in the Countdown playoffs.

“We have four races left and that’s 16 rounds, assuming that you get to the final round each time,” Beckman said. “We’re five rounds out of the lead right now, and we’re not racing for second place. The pressure is squarely on us.”

John Force qualified second in his Castrol GTX High Mileage Ford Mustang with a 4.060 at 308.35, while defending world champ Matt Hagan was third with a 4.061 at 305.42 in his DieHard/Aaron’s Charger. Funny Car points leader Ron Capps will start sixth and meet teammate Johnny Gray in the opening round.

Line earned his sixth No. 1 of the season and 30th of his career in Pro Stock, powering to a track record performance of 6.496 at 213.47 in his Summit Racing Equipment Chevy Camaro. He will meet Jeg Coughlin in the opening round.

“That [6.49] was the best corrected run we’ve ever made,” Line said. “It was about as close to perfect as you can get. Our Camaro finally come around. It’s a great car at least for this weekend. Today, is the first time that I feel like the Camaro is as good as our old Pontiac. Greg’s car still needs a little work, but mine was as good as it gets. This car has come a long way.” 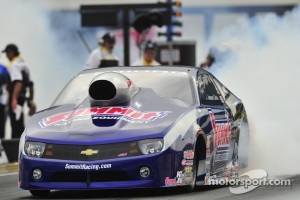 Line says with Series leader Allen Johnson’s extended lead in the standings, he’s trying to grab every available point on the table.

“Obviously, we’re working on trying to get the three little [qualifying bonus] points,” Line said. “All little points matter, but you really have to get the big points tomorrow in order to have a shot at the championship. I just have to do a good job driving and make it happen.”

Johnson was second overall with a 6.516 at 212.76 in the Team Mopar Dodge Avenger, while Line’s teammate, Greg Anderson, moved into third with a 6.517 at 212.36 in his Summit Racing Camaro. Erica Enders will start fourth in her GK Motorsports Chevy Cobalt.

In Pro Stock Motorcycle, Arana Jr. took his third No. 1 of the season and second in a row with a track record time of 6.809 at 196.50 on his Lucas Oil Buell. He will face John Hall in the first round.

“The conditions were great and we were able to tune from last night’s run and we were able to make adjustments so as you’ve seen we ran better today,” said Arana Jr. of his ninth career to qualifying position. “You always hope you’ll run quicker but I was a bit surprise that we ran that fast. I did not think we’d go a 6.80.”

Arana Jr. feels confident as he goes for his first win of the season and tries to move up in the points standings. He hasn’t made it past the semis in each of his other two races this season when he was the top qualifier. 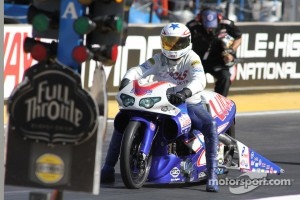 “I’ve been riding well and the bike is running well,” Arana Jr. said. “We just need to be consistent. I am not thinking about what happened before. I’m looking forward and living in the present.”

Hector Arana Sr. was second with a 6.827 at a track record speed of 196.56 on his Lucas Oil Buell and is followed by the Screamin’ Eagle Vance & Hines Harley-Davidson tandem of points leader Eddie Krawiec in third and Andrew Hines in fourth.

Allen Johnson to start in no. 2 spot in final eliminations at St. Louis