Brittany Force: “I’ve been wanting this since Day 1” 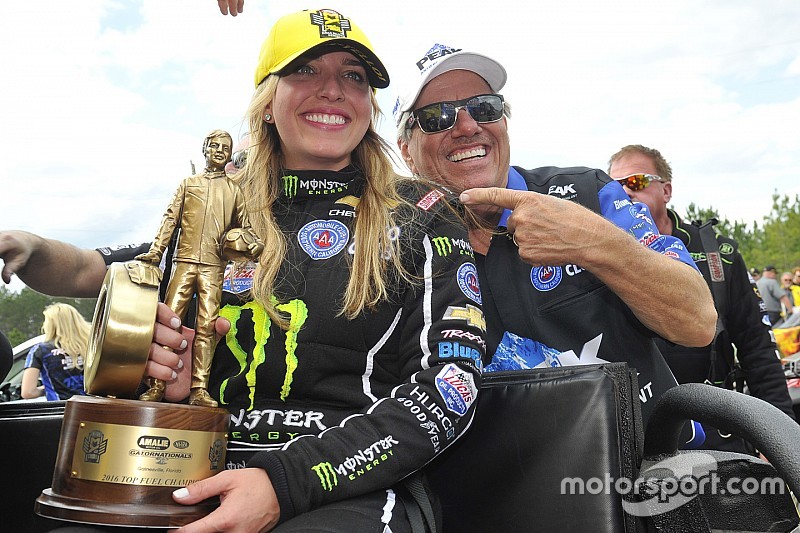 “I’ve been chasing this for quite a few years,” said an elated Force, who scored seven runner-up finishes before conquering Gainesville on Sunday. She declared: “This is my fourth season in Top Fuel, and I’ve been wanting this since Day 1.

"It took a lot of work and a lot of time to get here. It’s definitely not as easy as you think it is, but I have so many great people around me, with Brian Houston and Alan Johnson and every single one of my crew guys.”

Force made a 3.772-second pass at 318.77mph in her Chevrolet TF dragster to defeat Terry McMillen in the final round at Gainesville. Not only was it her first victory, it was the first for John Force Racing in Top Fuel, as the 16-time Funny Car champion’s team only branched into the category in 2013.

Said Brittany: “It’s awesome for John Force Racing to have both the Funny Car and Top Fuel dragster in winner’s circle. I couldn’t be more excited to be up here next to Robert.

“I go to my dad, I go to Courtney, and I go to Robert all the time to talk. And Robert is the calmest one to talk to if I ever need advice because he gives me a direct answer and is not all over the place. He has definitely helped me out over the years and I wouldn’t be here without him.”

Near misses make the win sweeter

Force, who has taken the Top Fuel points lead with this victory, stated: “I said a few years ago, when I was in my first final round that I was excited to be there and excited to make it to my first final, even though I didn’t win. But when the other final rounds started coming and I didn’t win, I started taking it tougher and tougher.

“Last weekend in Phoenix I really thought it was our day and our team was going to go all the way and take home that win. It was definitely disappointing not to, but now it feels good to finally do it.

“Our car was on fire the entire weekend. Went straight down there and had great runs. It’s a very proud moment for me and for the entire Monster Energy team.”

Asked what renowned engine-tuner Alan Johnson said to her before the final, Force said: “He came over and said, ‘Girl, you have got us this far, do it again. Do exactly what you have been doing again.’ And I needed that because sometimes when you pull up there it really is mental. It really is all in your head. Having confidence and feeling that you can do it is a big part of it.”

Describing the emotions of her family when victory was clinched, Force said: “I believe Courtney was in tears… My mom was screaming and jumping up and down and my dad actually didn’t say much for once! He was speechless and a little emotional. He gave me a hug.

“They were very excited for me and I was happy to have every single one of them there.”

A still-emotional John Force remarked to the media: “As an owner, you can’t expect much more than this today.”

Why Tasca's return is good news for all