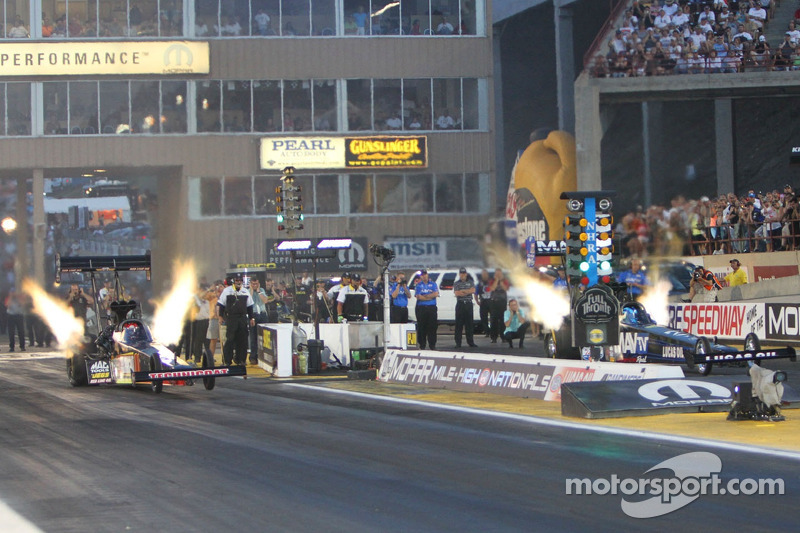 Brandon Bernstein and the MAVTV/Lucas Oil Top Fuel dragster are so close to a victory in the NHRA Full Throttle Series, they can taste it.

Bernstein finished runner-up at Sunday's Mopar Mile-High NHRA Nationals, the second time this season he has fallen just short of winning the Wally trophy. Sunday's race was especially excruciating because he fell short of beating Antron Brown by approximately 3 feet.

"The MAVTV team did an awesome job all weekend and I felt I was on my game, too," said Bernstein, who also reached the finals in Englishtown. "It's unfortunate we were on the wrong side of a good drag race. All you can say is that it's a good day, good weekend." 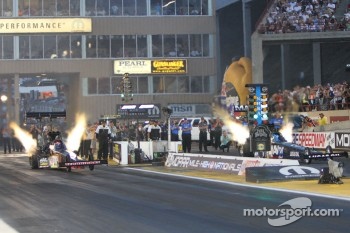 "It was a good drag race," Bernstein said. "It's what we do - we drag race. We would have loved to have won. On the bright side, we've got three in a row coming up here and if we keep knocking on the door like this we're bound to break through."

On the way to the final, Bernstein beat David Grubnic, Scott Palmer and Spencer Massey.

"As the day wore on, I had the feeling that today was going to be it, just because of the way things were going," Bernstein said. "We're going to pick it up and carry the momentum into Sonoma next week."

Against No. 1 qualifier Massey, Bernstein got off the line second but was able to use horsepower to cross the stripe first. Bernstein's winning lap into the finals was a 4.015 at 300.00 mph, while Massey finished with a 4.059 at 296.11 mph.

For its efforts on Sunday, the MATV crew was award the Full Throttle Hard-Working Crew Award.

"The results today show we've got the car and the crew to beat anybody out there," Bernstein said. "Now we've just got to go out there and win these things."

Bernstein didn't take much time to savor his strong finish as he rushed to the airport for a flight back home to Indianapolis to spend some time with his five-day old son, Landon Russel, before hitting the road again for the July 27-29 NHRA Sonoma Nationals in Sonoma, Calif.