BROWNSBURG, Ind. - Jack Beckman will arrive at his home track on Thursday just where he planned to be a year ago after finishing second to a Don Schumacher Racing teammate for the NHRA Funny Car world championship.

A year ago at the Auto Club NHRA Finals, Beckman started the event second in points, just one point behind DSR teammate Matt Hagan.

"We ran Matt Hagan in the second round in Pomona, and that could have been the championship had we been able to beat him, and they outran us," said Beckman, who finished the year 72 points away from the championship. 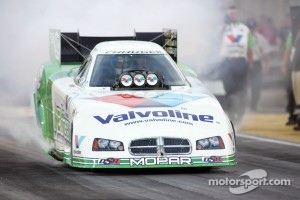 "Fortunately we're right back in a position to win it again this year.

People always ask in the off-season what our goal is for the next year, and my answer is always the same: I'd like to win at least three races and roll into Pomona with a shot at the championship, and bingo, here we are again."

Capps and Beckman have been the hottest Funny Cars after the first five NHRA Full Throttle Drag Racing Series events. Capps has won five titles and Beckman three during that run.

Prior to a subpar qualifying effort at Las Vegas two weeks ago, Beckman's team had qualified in the top-three at the previous nine events, won four poles and set a national record in that span.

"Sunday in Vegas every round was absolutely crucial, but I felt pretty confident," Beckman said. "And the interesting thing is we didn't have the car that we'd had at the nine races before that.

The Valvoline NextGen Dodge Charger R/T advanced to the championship round but lost to Capps. Beckman had won each of his three previous final-round appearances this year.

Beckman, 46, lives about 20 miles from the Pomona dragstrip where he taught nearly 8,000 students how to drag racing while working at the Frank Hawley Drag Racing School. In 2003, he won the NHRA Super Comp Sportsman world title.

Despite all of his racing experience, he wasn't prepared for a major course adjustment five events into this season when team owner Don Schumacher reorganized two of his four Funny Car teams.

That gave Beckman a new, veteran crew chief but one who had never led a Funny Car team.

"Based on all the changes earlier this year and us dipping down to sixth in the points, we're right back in the hunt for this, and that's all anybody can ask for," Beckman said.

"It could very well come down to a head-to-head meeting between Ron and I. You'd love to be able to race for this. It would almost be like two boxers at the top of their game meeting.

"I think, for the fans, Ron and I would both like to see that, to race for the championship. The problem is there's going to be 14 other cars that qualify, assuming our cars run well enough to qualify, and we're going to have to try to beat everybody in our way to get to (Capps)."

Another factor is former world champion Mike Neff of John Force Racing, who is ranked third and trails Beckman by 88 points.