BROWNSBURG, Ind. - Jack Beckman won't be the only racer competing this week in the NHRA Mello Yello Drag Racing Series opener at Pomona, Calif., to claim the fabled facility as his home track. 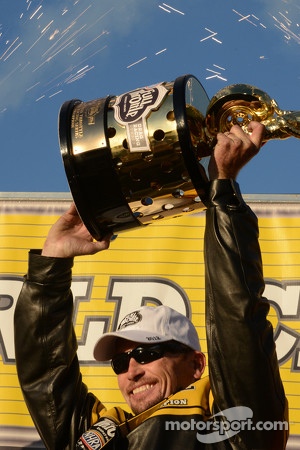 But none could declare squatter's rights to where the NHRA Winternationals will be held like Jack can.

No other driver has spent as much time there considering Jack taught about 7,000 people how to drag race there while an instructor with the Frank Hawley Drag Racing School.

Although he will return to the starting line Thursday for the first Winternationals qualifying session as the reigning NHRA Funny Car world champion, the resident of Norco, Calif., vows to remember first that he is a drag racing fan.

"The very first drag race I went to was at Orange County (International Raceway) not too far from Pomona. Having the opportunity to watch those cars and then walk through the pits and see these 8- foot tall people that got in these cars, as a 7-year-old child, it was really kind of a hero worship thing.

"I'm on the other side of the ropes now. But I never forgot the huge impact it had on me. A lot of times, as drivers, there's some relatively small gestures that we can do that can make a huge effect on a child and even on adults.

"I still am a fan of the sport. It hasn't jaded me the fact I get a paycheck for it. I identify with all the fans. If somebody brings their kid there and there's time, I'll bring him under the ropes and take a picture with the car. I love when an onlooker says, 'I love what you did for that kid.' I'll never forget that."

The popular driver of Don Schumacher Racing's Valvoline/MTS Mail for Wounded Warriors Dodge Charger R/T Funny Car realizes he has a larger stage now as a world champion in one of NHRA's two premier nitro categories. He won the NHRA Super Comp world championship as a Sportsman racer in 2003, but he finds himself at the pinnacle of the sport now.

Smith and Snyder return to Jack's team, and that puts a big smile on his face.

"We're in good shape," Jack said. "Nobody would have bet on us to win the championship five races in last year. What we did was relatively unheard of in motorsports, to take a partially assembled team, bring in a dragster crew chief (Smith), go out and do what we were able to accomplish. There's four other cars out there that are absolutely lethal and capable of winning the championship. We'll see how it ends up."