SANTA MONICA, Calif. — A history making run, her first professional win, and a ‘Top 3’ national ranking are just a few of the highlights that Alexis DeJoria has experienced thus far in the 2014 NHRA Mello Yello Drag Racing Series. 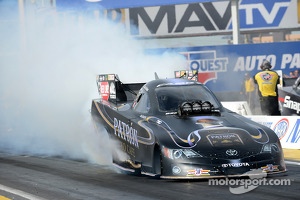 To say it’s been her career best start in her nine years as an NHRA competitor would be an understatement, but DeJoria, driver of the 10,000 horsepower Kalitta Motorsports Patrón XO Cafe Toyota Camry Funny Car doesn’t want to get ahead of herself as she prepares for this weekend’s NHRA Gatornationals at Auto-Plus Raceway in Gainesville, Fla.

“We’re just two races into the 24-race season,” said the former Bronson, Fla. resident. “Of course I’m extremely proud of our accomplishments but I just want to take it one step at a time. We still have a long season ahead of us and as we’ve all seen before, you can win one weekend and then not qualify the next. Drag racing is a very humbling sport. Our goal at this point in time is to continue to stay solidly in the Top 10, and we’ll do that as long as we continue to be consistent.”

“All of that being said, I’m extremely excited that the next stop on the tour is Gainesville. That’s one of my favorite tracks. I lived out there when I raced with Bob Newberry in Alcohol Funny Car and have so many great memories from that time period. Additionally, Gainesville was the scene of my first ever round win as a nitro Funny Car driver.

“As long as we keep progressing in the right direction and doing what we’re doing, it should be another good weekend for the purple team. I have nothing but confidence in Tommy [DeLago, crew chief], Glen [Huszar, co-crew chief] and my guys. Hopefully we can keep the momentum going in Gainesville and it’ll be another successful race weekend for the Patrón XO Cafe Toyota Camry team.”

NASCAR team loses appeal before board