Alexis Dejoria and Courtney Force: Countdown to the the world’s most prestigious drag race 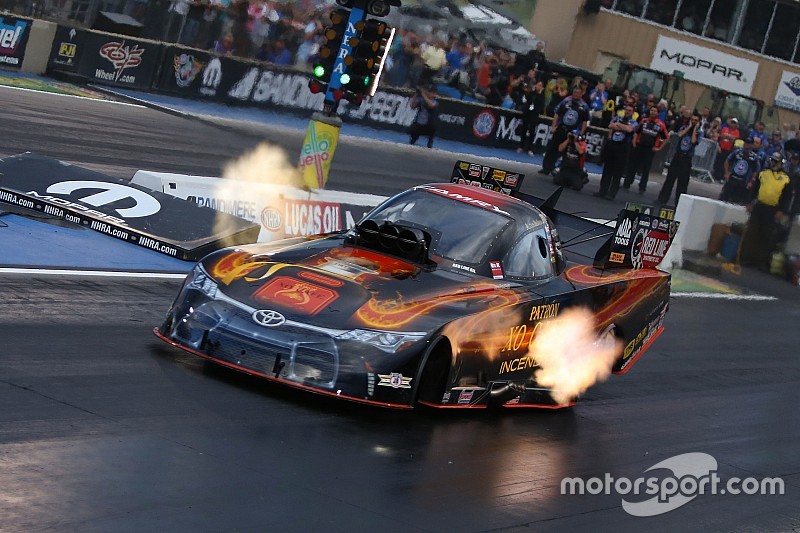 DeJoria is the defending Funny Car winner of the tradition-rich event, putting together a thrilling performance a year ago at Lucas Oil Raceway at Indianapolis.

Indianapolis – Alexis DeJoria knows what is on the line at the world’s most prestigious drag race, the 61st annual Chevrolet Performance U.S. Nationals. But like she proved a year ago, the Funny Car standout is more than capable of rising to the occasion on drag racing’s biggest stage.

DeJoria is the defending Funny Car winner of the tradition-rich event, putting together a thrilling performance a year ago at Lucas Oil Raceway at Indianapolis to cap off her breakout season in the NHRA Mello Yello Drag Racing Series.

A year later, DeJoria will need another big performance to ensure her spot in the Mello Yello Countdown to the Championship. Currently in 10th place in the loaded Funny Car class, DeJoria sits 73 points ahead of Courtney Force, the winningest female driver in Funny Car history, in the race for the final playoff transfer spot. That means all eyes will be on two of the top females on the NHRA circuit when they roll into the venerable NHRA-owned multipurpose motorsports facility Sept. 2-7.

“My mindset should be the way it was last year: with a clear head and all of the confidence in the world that we can accomplish what we’ve done in the past,” said DeJoria, who has three career wins. “To focus on what anybody else is doing at this moment is a defeatist mentality. We’re just going to 'stay in our lane,' so to speak, and concentrate on what we need to do to stay in the top 10.”

That means plenty of added drama for Force and DeJoria, as well as the other NHRA stars trying to slip into the top 10. Force will have to put together her best performance in a season that has been filled with frustration and currently five straight first-round losses.

But if there was an ideal place for a turnaround, Indy and the prestigious Chevrolet Performance U.S. Nationals would be the exact location for Force, who has seven career wins, but only one final round appearance in 2015. Indy is a points and a half race, meaning 30 points are up for grabs each round and winning the race means 150 points instead of the typical 100. A max total of 208 points are available for a single driver in each category, meaning a season-making showing from Force may be enough to get into the Countdown.

“Obviously it’s a huge race and our focus is on getting down the track,” Force said. “In the back of our heads, we’re thinking about trying to get into the Countdown to the Championship. It’s definitely going to be a little bit of a longshot and a huge challenge for our Traxxas Chevy Camaro team, but we’re up for the challenge. My teammate (Robert Hight) has done it before in the past and got in there. We’re going to give it everything we’ve got. This is a big weekend for us and a lot of pressure, but we’re excited for it.”

Cruz Pedregon is just 28 points ahead of DeJoria and her 10,000-horsepower Patron XO Cafe Incendio Toyota Camry, meaning a good weekend could also put DeJoria in a great position heading into the Countdown. Taking that confidence from her previous Indy win could also be beneficial in any upcoming pressure situation.

“We’ve won Indy before, and that’s a huge accomplishment,” DeJoria said. “We won the 60th anniversary and that’ll never be done again. I feel great going back to a place where we’ve done so well.”

For Force, it’s simply a matter of putting together a string of strong performances on raceday. That hasn’t happened in a while, but she knows there is too much potential and already proven success on her team for the struggles to last much longer.

In Top Fuel, Clay Millican and Dave Connolly are both trying to sneak into the final spot, as they sit 124 and 134 points behind 10th-place Spencer Massey, respectively. Steve Torrence is just three points ahead of Massey as he tries to hold onto his position as well. They will all have to deal with reigning world champion Tony Schumacher, who is after his 10th Indy win, four-time season winners Richie Crampton and Antron Brown, Doug Kalitta, J.R. Todd, Larry Dixon, Brittany Force and Shawn Langdon.

Gray would love to get back-to-back Pro Stock wins at Indy, but four-time world champion and current points leader Greg Anderson, who has won four races in 2015, is primed for a seventh Pro Stock win at the Big Go. Others to watch include reigning world champion Erica Enders, who also has four wins this season, Jason Line, Allen Johnson, Jonathan Gray, Chris McGaha, who won back-to-back races on the Western Swing to jump firmly into the championship picture, Vincent Nobile, rookie and local favorite Drew Skillman and two-time season winner Larry Morgan.

Veteran racer V. Gaines is the only Pro Stock driver with a shot of breaking into the top 10, but the Denver businessman sits 176 points back of 10th-place Skillman.

ESPN and ESPN2 will televise eight hours of coverage of the Chevrolet Performance U.S. Nationals. Five hours of qualifying coverage and coverage of the Traxxas Nitro Shootouts will air on ESPN from 11 a.m.-1:30 p.m. (ET) and on ESPN2 from 11 p.m. – 1:30 a.m. on Sunday, Sept. 6. Monday’s (Sept. 7) eliminations for the Chevrolet Performance U.S. Nationals will be featured in three hours of coverage on ESPN starting at 4 p.m. (ET).

Crampton, Hight, Enders and Krawiec race to victories in Brainerd