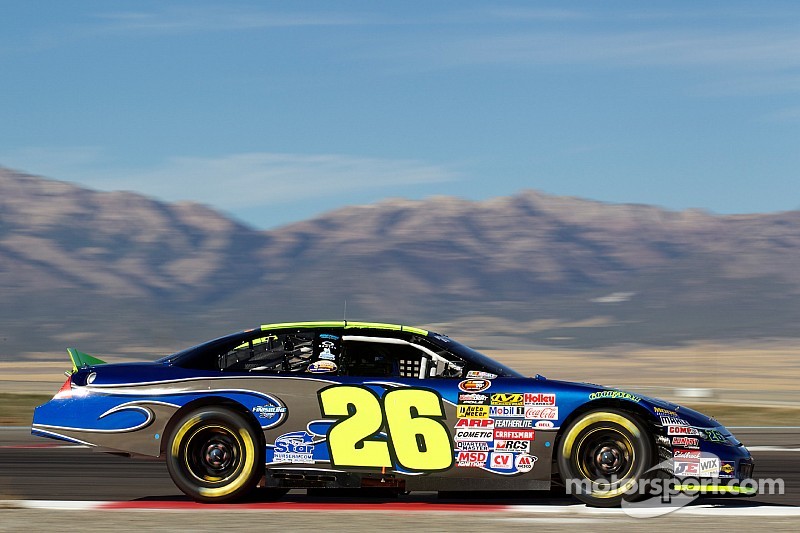 The 20-year-old Wilton, California, driver battled championship points leader Greg Pursley (in photo) on a green-white-checkered finish that pushed the Bakersfield 150 presented by GPS to 155 laps.

Pursley, who had won the series' first two races at the two-year-old track, was black flagged for a restart violation -- he took off before the restart point. That enabled Lupton's No. 9 Sunrise Ford/Lucas Oil/Eibach Ford to cruise to Victory Lane.

The penalty dropped Pursley to ninth.

Pursley won the Coors Light Pole Award earlier in the day and dominated the evening's race. He took the lead from Little on Lap 108 and was in control when a caution on Lap 148 for a spin changed the race.

Pursley still holds a 15-point lead over Lupton in the championship standings. McReynolds is 11 points back of Lupton, while Mayhew and Bickford round out the top five.

Lupton, a member of the NASCAR Next class, earned his first win at Evegreen Speedway in Monroe, Washington, last August en route to Sunoco Rookie of the Year honors in the NASCAR K&N Pro Series West. McReynolds and Little are also members of the NASCAR Next program, an industry initiative designed to spotlight the sport's rising stars. Little, the 2013 NASCAR K&N Pro Series East Sunoco Rookie of the Year, was looking to pick up a win in the series his father, Chad, won a championship in 1987.

The NASCAR K&N Pro Series West will next race in the Utah Grand Prix on Saturday, Sept. 13 at Miller Motorsports Park at Tooele, Utah.

NASCAR on TV: Where to find it this week