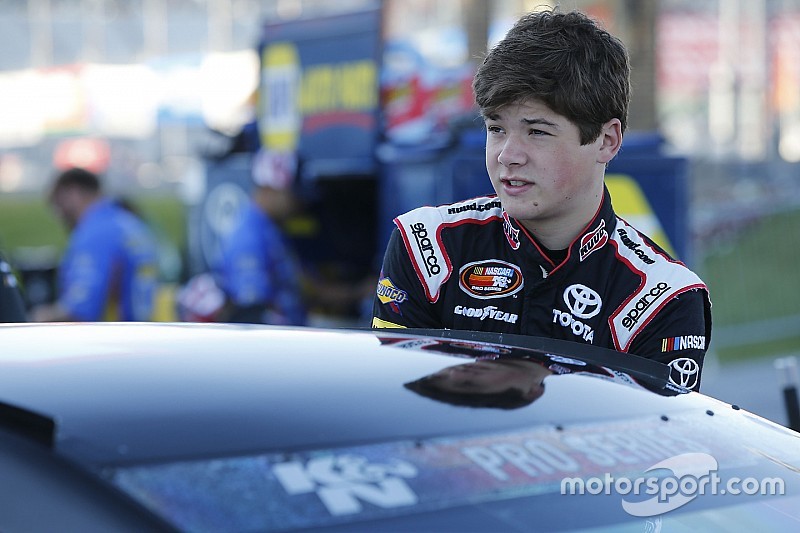 After taking a long break since the season opener in February, the NASCAR K&N Pro Series East gets back on track Saturday at Bristol (Tenn.) Motor Speedway, the first of five races over the next nine weeks.

Burton led 68 of the 70 laps in last year’s rain-shortened race to become the sixth different winner in as many races at the ultra-fast half-mile track. He also won the pole and led 16 laps before mechanical issues ended his day early in 2016.

Joining Burton in the starting field will be defending NASCAR K&N Pro Series West champion Todd Gilliland. Gilliland held off Burton to win the season opener at New Smyrna Speedway in February and he’ll try to make it two wins in a row Saturday.

Gilliland will drive for his father’s team and be joined by up-and-comer Tyler Ankrum along with Truck Series rising star Noah Gragson, who is making his first start of the season in the series.

A trio of K&N Pro Series West drivers will come East to compete in this race, including Bill McAnally Racing drivers Derek Kraus, Cole Rouse and Hailie Deegan. All three are racing the full 15-event schedule in the West division, while also competing in select events in the East division.

Kraus, a 16-year-old from Stratford, Wisc., is coming off a win in the West season opener at Kern County Raceway Park in Bakersfield, Calif., last month. He finished fourth at New Smyrna in February.

Kraus is in his second season of driving for BMR in the K&N Pro Series and won rookie of the year honors and finished third in the final standings.

Rouse returned this year to the K&N Pro Series, where he finished eighth in the West championship standings as a rookie in 2016. Last year, he won a championship while racing for Kyle Busch Motorsports in the CARS Super Late Model Tour.

Deegan – a 16-year-old series rookie from Temecula, Calif. – came away with a seventh-place finish at KCRP in her series debut. She had been sidelined by mechanical issues in the race at New Smyrna.

A member of the NASCAR Next program that spotlights NASCAR’s rising stars, Deegan honed her driving talent in off-road racing – where she won multiple championships after beginning her racing career at the age of 8. She also competed last year in stock cars, racing in super late model and late model divisions.

Saturday’s Zombie Auto 150 will be 150 laps (80 miles) to be run in three segments. The five-minute breaks will occur at or near the conclusion of Laps 50 and 100. At the conclusion of the breaks, lead lap vehicles that elected to pit will line up – in the order they were running at the beginning of the break — behind the lead lap vehicles that elected not to pit. Fuel may only be added during the breaks.