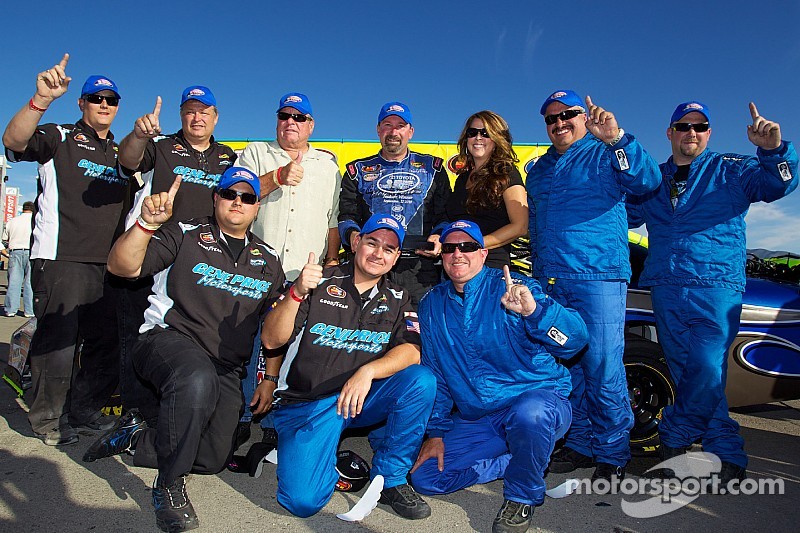 Nick Drake goes for the win while Greg Pursley claims his second title and contemplates retirement.

Drake, 18, held the lead from the green flag to the checkers in a race that was slowed by six cautions on Thursday night – including the last yellow on Lap 96 which sent the race into overtime.

After contact with Custer on the penultimate restart, Drake suffered from a tire rub but was able to keep the car out front to the finish.

“I had to do everything right,” Drake said “I slipped a little coming out of one and two and we were three-wide down the backstretch getting in and we all got together. I came out of four with the lead and we were clear at that point and there was no looking back.

“To finally get a win in the last race of the year is pretty special for all of our guys. To finally accomplish something gives us a lot of confidence going into next year. We’re looking forward to it Just finally put all the pieces together tonight.

“End of the race, that was a lot of fun,” Gaulding said. “I put myself in position for the win. We were three, four-wide. A couple of guys got into the wall. Me and Cole rubbed doors a little bit. That’s what racing’s all about…getting after it.”

In last year’s K&N Pro Series West finale, Custer led every lap but the last – when Gaulding dumped him for the win. Despite finishing third, Custer was satisfied with the result.

We were going three-wide, cutting the dogleg, that was some of the best racing I thought we had all year.

“We were going three-wide, cutting the dogleg, that was some of the best racing I thought we had all year,” Custer said. “I thought it was a good race for everybody.”

“I really didn’t want to see that green-white checkered at the end,” Pursley said. “I just wanted it run out. We were constantly trying to find a big, wide open space so we could just stay out of trouble. That was our goal. It was kind of an important goal to have tonight. We didn’t feel that it was necessary to go and try to win the race. We just needed to stay out of trouble and look at the big picture.

“It was a great night. We had a good car. We didn’t have a car that could win but we had a top-five car. We just didn’t want to push it and get up in the mess there. A lot of the guys were just here to win the race, so we didn’t want to get mixed up in that. Everything went great.”

The end of the road?

For Pursley, who is more than twice the age of most of the kids he’s competing against in the K&N Series, the evening was sentimental journey with his GPM crew – particularly knowing that it will likely be his last.

So, it’s kind of bittersweet to go away here as the champion and to think about that I’m not going to come back again with Gene Price Motorsports and my race team.

“The guys on the Gene Price Motorsports team did another awesome job,” Pursley said. “I couldn’t be happier with them. They’ve given me unbelievable cars for the last five years. (Crew chief) Jerry Pitts has been an awesome leader on this team and I’ve had all the same guys since we started.

“So, it’s kind of bittersweet to go away here as the champion and to think about that I’m not going to come back again with Gene Price Motorsports and my race team. Unfortunately, nowadays it’s all young kids. Not many race teams are looking at 46-year-old drivers…I think as of right now I’m retired. I’m happy to go out of here as a champion – on top.”

Who are the most popular drivers in the NASCAR regional touring series?