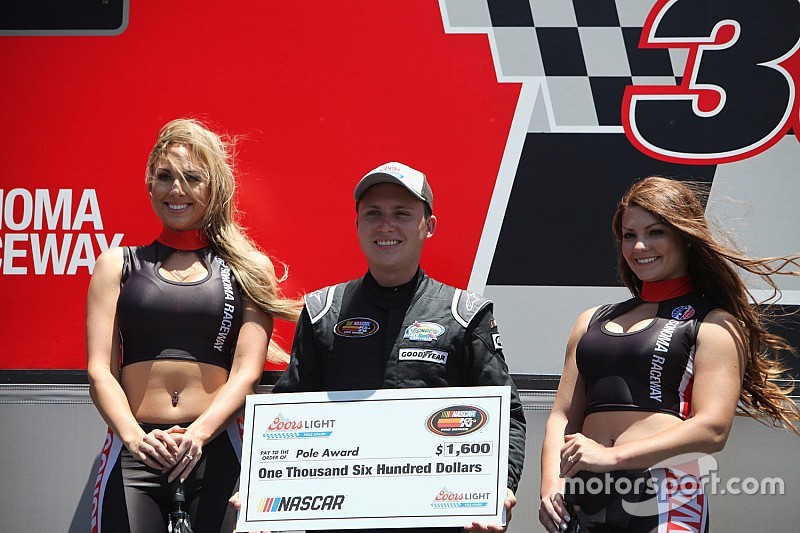 This time, it was Harvick and his son, Keelan, visiting Victory Lane on Friday to help Rodgers celebrate his first series victory in the Finger Lakes 100 at Watkins Glen (N.Y.) International.

“That race last month was pretty surreal, running wheel-to-wheel with Kevin and somebody of his caliber and experience. Running behind him I learned a lot of things that I applied here,” said Rodgers, 22.

“After that great run we decided we absolutely needed to do more road courses and that was actually one of Kevin’s suggestions to me. It really paid off.”

Rodgers claimed the win in overtime and nearly averted disaster as Ruben Garcia Jr. attempted to make a pass for the win on the last lap and instead slammed into the wall.

With three races remaining in the East season, Burton holds a five-point advantage over Gilliland in the series standings.

Rodgers, a Hawaii native who grew up in Murrieta, Calif., has been racing since the age of 8. His racing interests across a wide spectrum – from NASCAR competition to Motorcross to the Pirelli World Challenge Touring Class.

He is competing full-time in the K&N West division this season and is fourth in the series standings with five races remaining.

“I’m hoping we can prove to the upper echelons of NASCAR that we are really good at road courses. Ultimately, I’d like to show people what we can do,” Rodgers said. “I’d love to be like a Max Papis or a Boris Said who comes in to do road courses, maybe even make a career out of that.

“That’s not my one goal, my one goal is to run every race in the upper series, but that would pretty fun to do.”