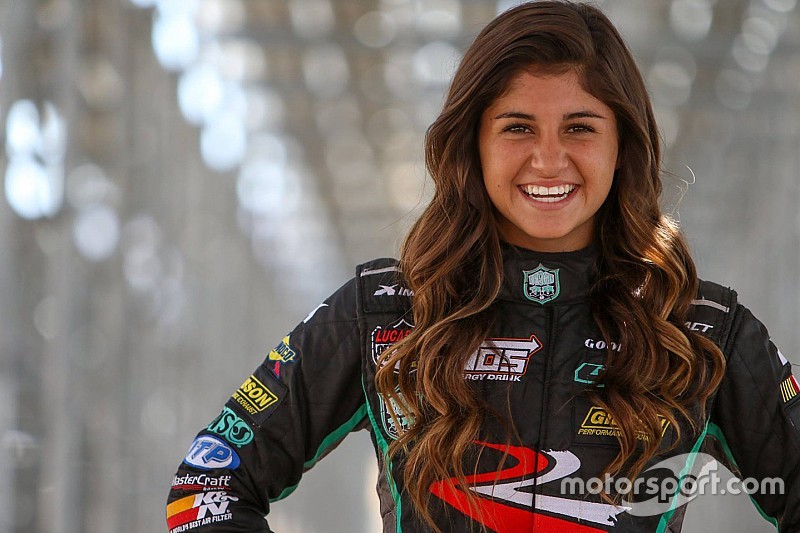 After coming so close to winning last season, Hailie Deegan was not to be denied again in Las Vegas.

After her frustrating finish in last year’s event on the Dirt Track at Las Vegas Motor Speedway, Deegan took advantage of an opportunity on the final lap to pick up her second NASCAR K&N Pro Series West victory.

Having picking up her first win last season, the 17-year-old NASCAR Next driver was able to make a bold pass on the final lap past race leader Jagger Jones to pick up the season-opening win for the series.

With the help of lapped traffic, the No. 19 dove to the inside, cleared Jones off Turn 2 and sped to the checkered flag.

"In the end we wouldn't have caught him if it weren't for the lapped cars," Deegan said. "And they got in his way. If I was him, I'd be mad. Really mad.

"But some people’s losses are other people’s wins and we ended up getting it done. I knew what we had to do to win. I knew it was going to come down to the last lap again and we made it happen."

The Temecula, California teenager struggled with her car during practice and she was having trouble adjusting to the dirt at the track located adjacent to Las Vegas Motor Speedway.

Deegan said she worked on things between then and the race.

"Mostly just me working on my lines," she said. "The line I was trying to run didn't work for my car, so I had to move around and find which line worked.

"Once we found that, fixed the car, the car was great. The track was still icy, and we still weren't good, but it was better than everyone else."

After pedal extension problems in her heat race forced her to start ninth in the main event, Deegan worked her way into the top five by the lap 51 break. With some new tires and adjustments, she restarted third behind Derek Kraus and Jones.

Jones passed Kraus to take the lead with 31 laps to go and Deegan followed him as well to move into second. Jones built his lead to as large as four seconds with 10 laps remaining before Deegan made her charge.

Watch her daring pass below:

Jones, making his first career K&N Pro Series West start, appeared to be on his way to a victory, but the 16-year-old driver was not able to close the deal for various factors.

"Hailie definitely had a little more speed at the end," Jones said. "But I think I would've held her off no problem, but lapped cars cut me off, pushed me right into the tire (barrier) on the last lap and Hailie was just able to get underneath me. Definitely wanted that win."

Jones wasn't upset with Deegan for the move, but he was frustrated with Kenny Bumbera, who made life difficult for Jones on the final lap.

"Oh I think her move (last-lap pass) was fine," Jones said. "I mean she didn't really do anything too bad. It's just the lapped car cut me off in front. It just pushed me up the track.

"Once that all happened she had a whole lane to herself. It was kind of given to her, which is unfortunate on the last lap. It just sucks sometimes."

NASCAR Mailbag: Where is the advantage?