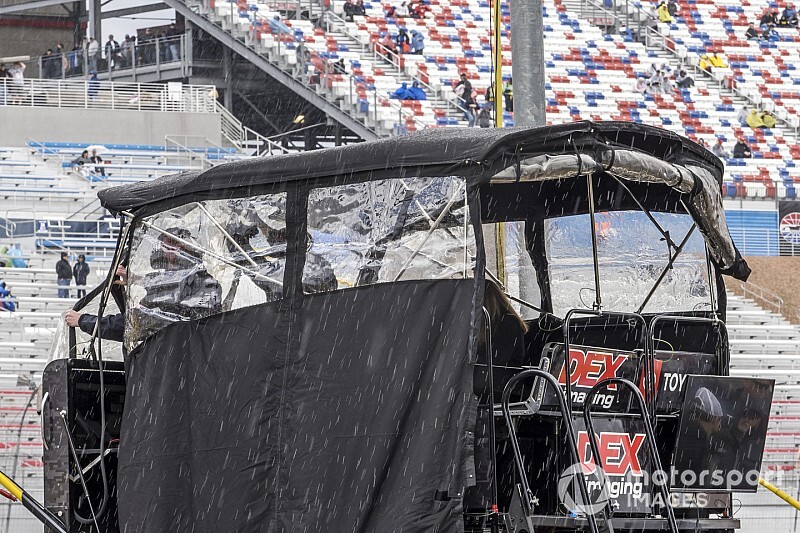 The conclusion of Saturday’s NASCAR Xfinity Series race at Las Vegas has been postponed until Sunday afternoon.

Persistent rain finally brought a halt to the Boyd Gaming 300 with just 50 of 200 of the scheduled laps completed.

The race will resume on Sunday on Fox Sports 2 following the conclusion of the Cup Series race at approximately 7:30 p.m. ET.

Chase Briscoe dominated AND took the Stage 1 victory, easily holding off Ross Chastain. Most of the leaders elected to pit for the stage caution but Joe Graf Jr. remained on the track and will be the leader when the race resumes on Sunday.

Briscoe grabbed the lead on the start of the race only to see Allgaier pass him and take command on Lap 3.

On Lap 18, Daniel Hemric spun off Turn 4, slid down to the infield grass, then shot back up the track and into the wall to bring out the first caution.

All of the lead-lap cars elected to pit, with Briscoe the first off pit road and he led the way on the restart on Lap 23.

With 10 laps remaining in the 45-lap stage, Briscoe continued to lead the way as Chastain moved into second. Jones ran third, Cindric fourth and Allgaier fifth.

Myatt Snider was scheduled to start on the pole but had to move to the rear of the field at the start due to moving to a backup car over the weekend.