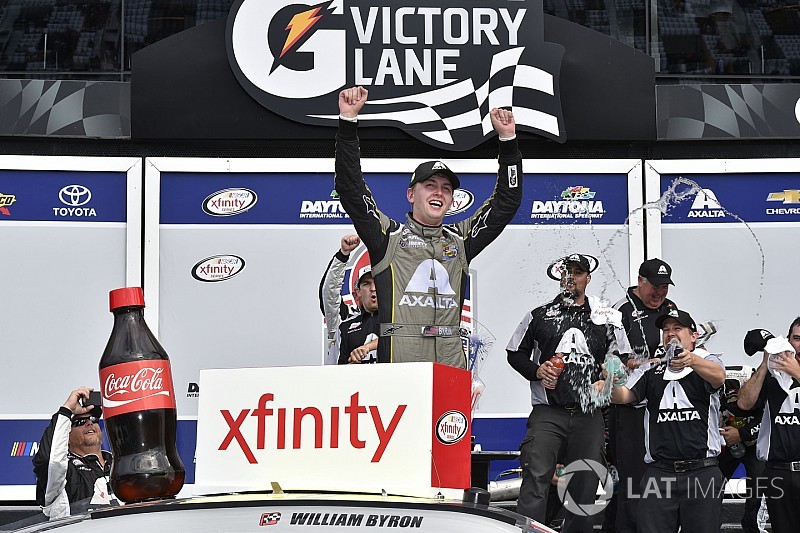 For two weeks in a row, William Byron has found his way to Victory Lane.

Byron drove to his second career win in the Coca-Cola Firecracker 250 at Daytona International Speedway on Saturday.

"Man it's awesome. These Daytona fans are really cool. I came here for a Daytona 500 when I was a kid ... this is so cool to win at Daytona. I can't even imagine it. These guys brought a great JRM car and hopefully Dale can get it done (tonight). This is is really cool for our team and just really proud of everybody," said Byron.

"We both had really good cars," said Byron's JRM teammate Sadler. "I knew the only chance I had to win was to get him out front and then try to race between us two, but congratulations to William and their team."

Annett pushed Byron to the lead at the start. Dillon moved to second, Annett third. Gallagher, Reddick, Tifft, Kennedy, Jones, Lagasse and Hemric rounded out the top 10. After five laps, the top-six cars broke away on the inside with Byron leading the train and Annett in second. Over the next lap, the single-file line expanded to 16 drivers with Byron being pushed by Annett.

With 25 laps remaining, Logano locked onto Allgaier’s bumper and moved up to 11th. Five laps later, the front pack split into two lines. Byron led on the inside with Ty Dillon coming on the outside. Byron pulled to the front of Dillon coming to the line after 83 circuits. Annett remained on the inside lane. Byron moved back to the inside as Dillon moved to the point on Lap 84.

As the middle field spread out to three-wide, JJ Yeley got loose in the center running 18th, while Jeremy Clements lost control of his car after contact with Chris Cockrum to ignite the sixth caution with 15 laps to go. Nine cars pitted under caution including the two cars involved in the wreck along with Gaughan, Yeley and Gallagher.

Dillon had the lead followed by Logano, Sadler, Poole, Reddick, Byron, Custer, Annett, Kennedy and Ryan Reed with 10 laps to decide the race. Logano passed Dillon for the lead on the next lap. Coming to eight to go, Byron got in the back of Poole, who collected Dillon off Turn 4. Poole and Dillon came to pit road under the seventh caution.

NASCAR waved the red flag for the third time in the race as the drivers came to a stop on the backstretch. After a nine-minute, 46-second delay, the race returned to green with Byron in the lead followed by Erik Jones, Sadler, Burton, Armstrong, Gase, David Starr, Gallagher, Poole and Gaughan.

The race went into overtime on Lap 102. Erik Jones lost power on the restart as Byron extended his lead on the backstretch. As Byron crossed the overtime line, a wreck broke out behind him with Lagasse taking out Smithley.

“We just have to go around one more time right,” Byron asked the team.

He did, and collected his second career Xfinity win in as many weeks.

For Starr, it was his first top-five in 112 career NXS starts.

“Now I feel like I can be more aggressive with some bonus point,” Sadler said. “We’re going to have to be aggressive to move back up to the front…Forty laps is kind of a long time but not really from back here.”

Justin Allgaier, who pitted prior to the race restarting on Lap 12, stayed out and assumed the lead from Blake Koch for the start of the segment. Annett and Cole Custer followed the same strategy. Ben Kennedy took two tires and was the first driver off of pit road followed by Koch, Brennan Poole, Brendan Gaughan, Ty Dillon, Jeb Burton, Tyler Reddick, William Byron and Elliott Sadler.

Ben Kennedy pushed Justin Allgaier to the lead on the outside on the Lap 35 restart. After the first circuit, Poole moved out front and engaged into a battle with Ty Dillon. The field completed Lap 37 when lightning was reported in the area, prompting the second red flag of the event at 12:51p.m.

“It was definitely slow, I couldn’t do what I needed to do,” Koch said as he sat on pit road.

His crew chief Chris Rice told Koch to stay in front of the No. 9 car of Byron.

The race was placed under yellow at 3:20p.m. Burton pitted on Lap 38 and dropped to the back of the field. NASCAR opened pit road on Lap 39 and Byron, Hemric, Ross Chastain, Timmy Hill, Jeremy Clements and Mark Thompson pitted.

The race returned to green on Lap 40 with Poole in control. Ty Dillon battled Poole for the point but the No. 48 Chevy held on at the line. Kennedy moved into lead after 42 laps. Dillon was second followed by Allgaier, Poole and Logano. Dillon took the lead on Lap 44. With a push from Sadler, Poole challenged Dillon on the outside line coming to Lap 48.

The top 22 cars were running in two lanes, side-by-side coming to the line as Poole resumed the lead. Dillon was second followed by Sadler, Logano, Mears, Kennedy and Lagasse. As the field came around through Turn 4 to complete Lap 50, Jones got into the back of Custer and checks up.

“It was tight there, go the air taken off, just got loose,” Custer said.

Suarez, who was behind Jones, ran into the back of the No. 20 Toyota, then slid sideway and collected Koch and Brown into the inside retaining wall at the entrance of pit road. Josh Williams also was involved in the six-car wreck that triggered Caution 4.

Poole had the lead and the line but did not maintain cautious pace and lost two positions for the restart with three laps remaining in the segment. Sadler moved to the point followed by Allgaier, Poole, Mears, Brandon Jones, Armstrong, Hill, Chastain, Ray Black Jr. and Gaughan.

With two laps to decide the stage, Sadler held the point with Poole, Allgaier, Jones, Mears, Dillon, Armstrong, Gaughan and Kennedy. Jones moved to the lead on Lap 59 but Sadler came around on the back stretch.

Thirty-six drivers remained on the lead lap to decide the final segment.

NASCAR Xfinity drivers waited 16 hours and 13 minutes to resume what ended up being the longest stage in the series history. Blake Koch led 26 of 30 laps and held a 0.109-second advantage at the line over Ben Kennedy for his first stage win of the season.

After an additional delay for drying the track on Saturday, the cars rolled off of pit road — with the exception of Garrett Smithley, who had issues under the car.

Initially, polesitter Ben Kennedy led the field to green. After leading the first lap, he relinquished the point to Brennan Poole but regained the spot on Lap 3. Blake Koch moved up to the lead at the line from second place on the next circuit with Kennedy second, Daniel Suarez, Poole and Ryan Reed rounding out the top five.

At Lap 5, there were reports of rain on the backstretch of the 2.5-mile track. As Koch brought the field to the line after seven laps, NASCAR called a caution for rain. Kennedy was second followed by Poole, Daniel Hemric, Suarez, Elliott Sadler, Reed, Erik Jones, Joey Logano and Ty Dillon.

At the time of the caution, there were four lead changes among three drivers. NASCAR red-flagged the race after 10 laps and brought the cars down pit road at 15:01. Koch led eight laps.

“My race car is fast, man,” Koch told MRN. “I felt like we had a really fast car, the outside line couldn’t get a run on us. It was pretty neutral. The dirtiest air I was in was fourth. Hopefully, we’ll be up front all night.”

Three laps after the race resumed (Lap 16), Daniel Suarez passed Koch. But the No. 11 Chevy powered back to the point on the next circuit. Koch led Lap 17 followed by Kennedy, Suarez, Poole, Reed, Hemric, Jones, Sadler, Logano and Matt Tifft.

While the front pack broke up, Koch held on for the stage win.

Five cars started at the rear of the field: Justin Allgaier, William Byron, Jeb Burton, Mike Harmon and Matt Tifft. The Nos. 7, 9, 24 and 74 had unapproved adjustments. The No.19 had unapproved body modifications.