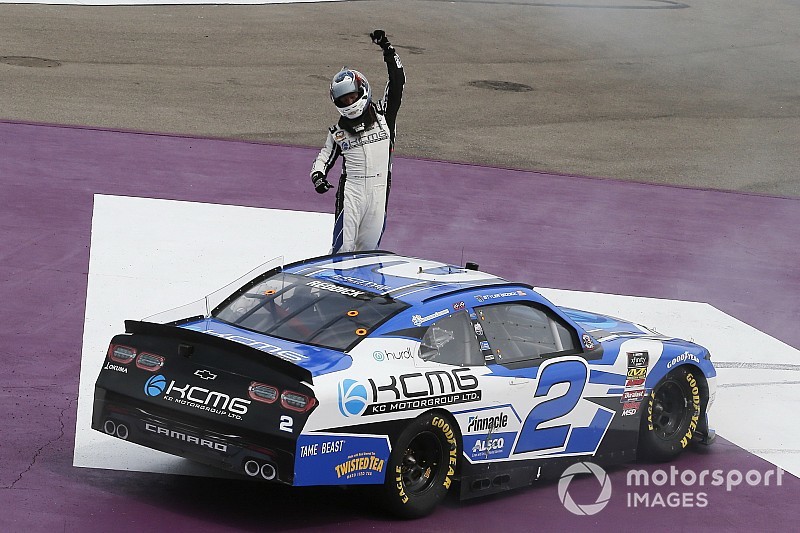 Tyler Reddick joined the three-win club in the NASCAR Xfinity Series, all coming in the last five races.

Reddick stretched his fuel the final 47 of 125 laps in Saturday’s LTi Printing 250 and held off a fast-approaching Noah Gragson to claim the win at Michigan International Speedway.

After getting clearance he had enough fuel to make it, Gragson passed two cars in the final two laps trying to chase Reddick down.

"I just didn't want to burn a lot of fuel there. Our Chevrolet was really good but I made some mistakes on pit road and we didn't get the track position until the end there," Reddick said after the race.

"A great team effort. I didn't do the thing I needed to do on the race track but man, that was a great car and we put ourselves in position to win."

Asked about his third win all coming in the past five races, Reddick said: "We just bring great race cars to the race track every week. All the guys at the shop work super-hard on these Chevys.

"All the guys at Richard Childress Racing just make an outstanding effort throughout the week. Their efforts back at the shop and their hours spent from morning to afternoon every single day is what is paying off in getting us back to Victory Lane so often this year."

Christopher Bell and Cole Custer, who were the fastest cars in the race, both had to pit under green for a splash of fuel and ended up 13th and 12th, respectively.

Gray Gaulding spun off Turn 4 on Lap 72 after contact with Chad Finchum to bring out a caution. The race returned to green on Lap 77 with Bell in the lead.

Chase Briscoe spun on the restart in Turn 2 after contact from Tommy Joe Martins to bring the caution back out. Some of the lead-lap cars elected to pit this time and Reddick was the first off pit road.

On the restart with 44 laps remaining, Bell had stayed out and remained out front. He was followed by Custer and Ross Chastain.

With 40 laps to go, Bell maintained a solid lead over Custer as Reddick moved up to third.

On Lap 95, Custer got around Bell off Turn 1 to the lead for the first time in the race. Both Custer and Bell would likely need to pit again if there were no additional cautions.

After 100 laps, Custer’s lead had grown to more than 1.2 seconds over Bell. Reddick remained in third and was saving gas hoping to make it to the finish without another stop.

On Lap 114, both Bell and Custer made green-flag stops for fuel and Reddick moved into the lead with 10 laps remaining.

With five laps to go, Reddick remained out front followed by Annett, Menard and Gragson.

With one lap remaining in the 30-lap stage, Bell went to the inside of Menard to take the lead for the first time in the race and held on for the stage victory.

Custer also got around Menard to take second-place. Reddick was fourth and Justin Haley rounded out the top-five.

Following the break between Stages 1 and 2, all of the lead-lap car elected to pit and Menard was the first off pit road and retained the top spot. He was followed by Custer and Haley.

The race returned to green on Lap 38.

After 40 laps, Menard remained out front but Custer was beginning to close on his rear bumper in an attempt to grab the lead.

On Lap 47, Custer got side-by-side with Menard but could not complete the pass for the lead and briefly fell back.

A piece of debris covered the nose of Menard’s No. 12 Ford, which sent his engine temperatures rising and in danger of having to pit.

With five laps to go, Menard continued to hold a small advantage over Bell. Custer ran in third.

Menard, making his first series start of the year, held off Bell to claim the Stage 1 victory.

Reddick was third, John Hunter Nemechek fourth and Gragson rounded out the top-five.

Menard, who started on the pole, led the way the first four laps.

On Lap 5, Dillon Bassett and Ray Black Jr. made contact and wrecked off Turn 4 to bring out a caution. During the caution Ryan Sieg was penalized for speeding on pit road and had to restart from the rear of the field.

The race returned to green on Lap 10 with Menard out front followed by Bell and Brandon Jones.

On Lap 12, a caution was displayed for two separate incidents on track. Herbst hit the Turn 4 wall and Jeb Burton had a tire go down on his car.

The race returned to green on Lap 17 with Menard still leading the way followed by Nemechek and Bell.

With 10 laps to go in the first stage, Menard maintained a small advantage over Bell. Nemechek was third, Gragson fourth and Reddick was fifth.

Reddick moved up to the third spot on Lap 27 and began working on Bell for the second spot.

Tyler Reddick: "My confidence is higher than it's ever been"