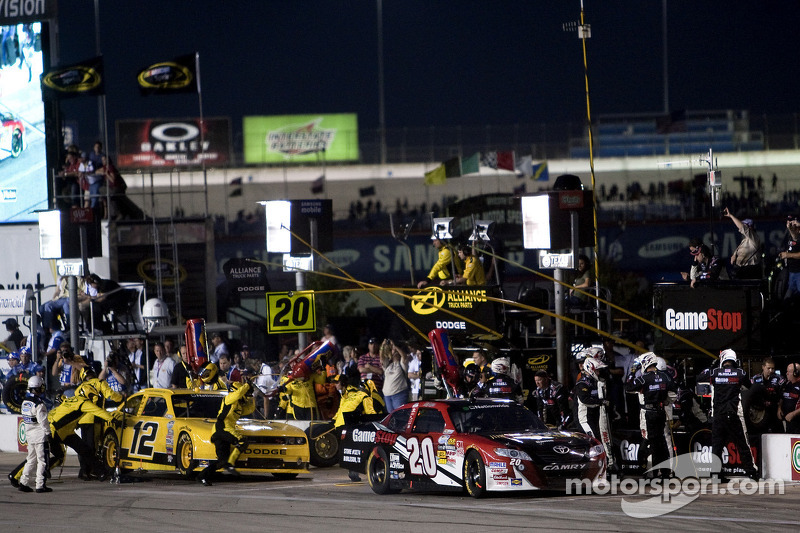 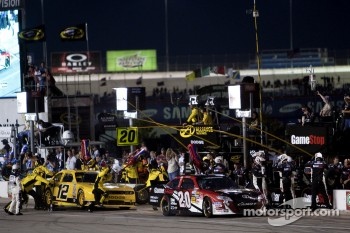 . The race was Kyle Busch's 100th NNS start in a Toyota since 2008. He was running second when he was involved in an accident on lap 88 and was relegated to a 34th-place result.

Did you have a fourth-place car tonight or were you better than that? "At times we were the fastest and that was only for about four laps -- when we were fast. Our balance changed too much from the beginning of the race to end. We were slow to take off, and then 10 or 15 laps in a run we were real fast. Then about 20 laps in a run we'd get too loose and start losing ground. I tried all I could to get by the 33 (Paul Menard) there -- it was all I had. If you get clean air it helped a lot. It's a really big deal today. Our GameStop Toyota was good for about five or 10 laps and then it went back the other way. Probably had the fastest car out there for five laps. And, then we got too loose and started losing what we made up. I had a small window to go fast and I had to make the most of it. Fourth-place is about where we were -- had a fourth-place car."

Overall, it was a good run and to come out of Texas with a ninth-place finish -- I'm pretty happy with that."

How was your race? "Jerry (Baxter, crew chief) and the guys put together a really good car, just like they always do. I gave them some bad information near the end of the race and they adjusted the car too much and it was tight. Overall, it was a good run and to come out of Texas with a ninth-place finish -- I'm pretty happy with that."

Are you happy with at top-10 finish? "It's good that we stayed in the top-10. We gave up about 10 seconds on the race track by pitting under a green flag stop. As we were coming in, a car got into the wall and we thought a caution would come out, but I was already slowed down. So, I stayed out and caution never fell. We lost a lot of ground there, so it could have been a sixth or seventh-place finish and it ended up being 10th. That's unfortunate, but still a top-10 is a good day for our Shore Lodge Toyota team. We'll take it and move on. We have a lot of bright spots from this race. We were really fast at times, we just couldn't capitalize on the finishing position."

It's going to go down as a wreck, but I felt like we were fast enough to win.

How did your evening end tonight? "We crashed. That's about it. That's what it's going to go down in the notebook. But, we had a good car. The guys did a great job from when we unloaded -- we were a little off this weekend. And we made so many changes that we got lost at one point, but we got a lot better. Real happy with the way the guys worked together this weekend and we got the car going a lot better. This Z-Line Designs Camry was fast right there. We were running Carl (Edwards) down. Almost got him along side of him there one time and waited for the backstretch and we crashed back down into turn one and two. Oh well, that's the deal."

Did you experience the track changing from daylight to evening? "We started out a little bit tight and the track was actually coming our way a little bit. It started to free up a little bit that last run right before we wrecked. We felt pretty good about it. We were just biding our time. We were just running there -- we were running hard, but we were just running. It felt like we were probably the only car that was going to give Carl (Edwards) a shot. It's a shame that we didn't have the chance to race it out the rest of the night. See what it would come down to toward the end and what team would make better adjustments. It seems like ours was a little better in the long runs."

What did you see in front of you on the race track? "It didn't happen that fast, but there was no time to react. You can't just stomp on the brakes and turn left, you're already maxed out with your tires. It's real unfortunate -- these guys did a great job working all weekend to get the car capable of running with Carl (Edwards) there. They unloaded a lot better than we did and we just worked really hard getting to that point where we could run with those guys. I felt like we were better on the long run with this Z-Line Designs Camry, just didn't quite make it, obviously. It's going to go down as a wreck, but I felt like we were fast enough to win."

Did you feel you had a winning car before the wreck that took you out of the race? "I felt like there was an opportunity for us to win. I'm not going to say we were the winning car, Carl (Edwards) is definitely the winning car. We were making grounds on him to where we could get there and at least run with him. We probably could have put on a really good show with the fans out here in Texas."

Was there anything you could do to avoid the wreck? "No. I kind of saw it coming and tried to turn left, but it was too late."

Was there anything Tim Schendel should have done to prevent the accident that took you out of the race? "I don't know how long his tire was going down, but if it was going down for the whole front straightaway he should have gotten to the slowest speed and ran the apron."