Smith returns home in hopes of regaining the lead

Over the last seven races, Regan Smith of Cato, N.Y., has compiled 189 points in the NASCAR Nationwide Series championship standings. On the surface that might seem like a healthy amount of points.

After analyzing the stats of his fellow top-10 drivers over the same time period, however, a different picture is painted.

Smith’s points tally of 189 ranks last among all drivers currently in the top 10, indicative of the slide he has taken during that time. Granted he is currently tied with Sam Hornish Jr. for second, 14 markers behind Austin Dillon, and led the standings for 10 consecutive weeks (Talladega through New Hampshire). It was only eight races ago, however, when Smith finished first at Michigan and left the Wolverine State with a 58-point advantage in the standings. 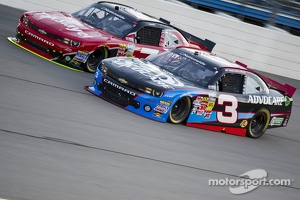 With the series heading to New York for Saturday’s Zippo 200 at Watkins Glen, Smith hopes he’ll be able to reclaim his spot atop the standings in front of a hometown crowd. In six national series start at The Glen, Smith has one top-10 finish, which was a ninth-place performance in last year’s NASCAR Sprint Cup Series race. In two NASCAR Nationwide starts at the 2.45-mile road course, Smith has finishes of 19th and 23rd. He struggled in the first road-course event of the season at Road America, where he finished 32nd.

Dillon, who took over the points lead from Hornish two races ago at Indy, is seeking advice from teammate and road-racing specialist Max Papis to ensure that Watkins Glen doesn’t present any hiccoughs. Dillon’s only series start at The Glen resulted in a 23rd-place finish. Earlier this season at Road America, he finished 10th.

With the series headed to Watkins Glen for the Zippo 200, Sam Hornish Jr., who has previous road-course experience from his time in the NASCAR Sprint Cup Series and IndyCar Series, could use this Saturday as an opportunity to capitalize on that resume, which several of his closest rivals lack.

In six trips to road courses with the NASCAR Nationwide Series, he has finished in the top five in the most recent four. Earlier this season, he finished fifth in the first road-course event of the season at Road America. He posted top-five finishes in all three races on road courses last year, finishing third in The Glen race. In addition, he had a runner-up performance at Montreal and a fifth-place showing at Road America. 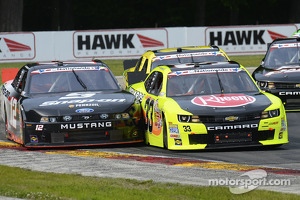 He competed seven times at road courses in the NSCS, scoring a fifth and a 14th in his last two events, which were both at The Glen. His 11 career road-course starts in the IndyCar Series were highlighted by a runner-up finish at Watkins Glen in 2007.

Although Hornish has only one win (Las Vegas) to his credit this season, he has collected a series-high four runner-up finishes among points-eligible competitors that have him tied with Regan Smith for second in the standings.

In all four races that he placed second, Hornish finished behind NSCS regulars, thus earning him the most championship points among NNS drivers in three of the events, and tying him with two other drivers for the most points earned in the fourth.

Round Two: Watkins Glen Is The Second Of Three Road Courses

With about a month and a half to prepare since the first road race of the season at Road America, the NASCAR Nationwide Series head to Watkins Glen for the Zippo 200 and the second of three road-course events during the 2013 season.

Instead of having to wait 49 days to apply what they learned during the last road-course event, teams will now be able to take what they learn this Saturday at The Glen and immediately apply it next Saturday in the inaugural trip to Mid-Ohio for the Nationwide Children’s Hospital 200.

With only one driver in the top 10 who has even won on a road course in the series – Justin Allgaier (Montreal 2012) – it is likely that the next two races will shake up the standings.

The NNS is NASCAR’s only national series that visits three road courses during the season. The NASCAR Sprint Cup Series visits two, while the NASCAR Camping World Truck Series heads to just one.

NASCAR Whelen Euro Series driver Anthony Gandon of Bayonne, France, will attempt to make his first national series start this Saturday behind the wheel of the No. 23 Rick Ware Racing Ford.

Allgaier has something they all want