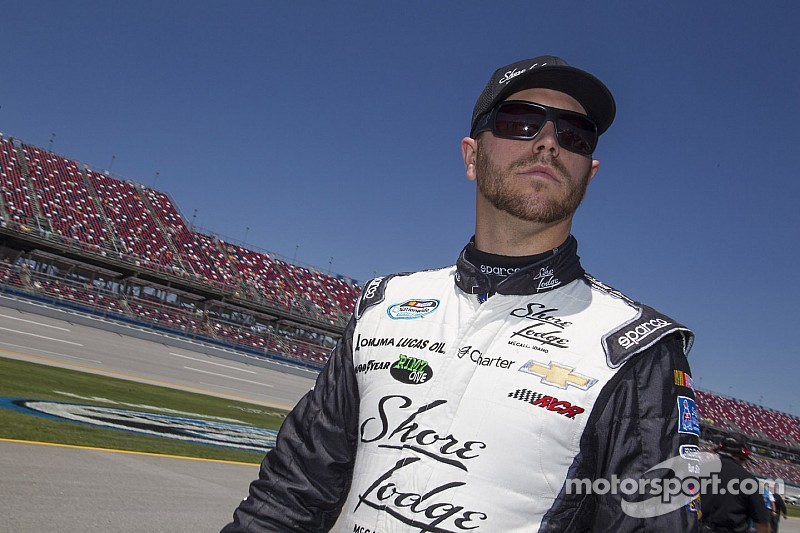 Coming off a career-best season in the Nationwide Series, Scott is ready to start 2015.

MIAMI – Brian Scott has signed on for another year at Richard Childress Racing.

Scott, 26, has enjoyed the last two seasons behind the wheel of the No. 2 Shore Lodge Chevy but 2014 was his best to date. And he’s looking to build on that success.

After five full seasons on NNS tour, Scott posted a career-best six top fives, 23 top 10s and three poles. His average finish of 6.5 combined with an average finish of 9.3 helped elevate Scott to his first top-five (fourth) showing in the point standings.

“I’m excited about whatever the future holds for me,” Scott told Motorsport.com. “Obviously, I’ve enjoyed my time at RCR. I look to continue that relationship and to build on what we’ve established there.

“Being able to climb our way through the championship standings – and I think we have a championship caliber team. So, I’m looking forward to next year, coming back and trying to battle for that championship.”

Unfortunately, Scott will have to soldier on without his crew chief of the last two seasons, Phil Gould. Gould is joining Elliott Sadler with the No. 1 Roush Fenway Racing Ford in the Nationwide Series. Scott says a replacement for Gould has not been determined, however, he’s “very involved” in the decision-making process.

“One of the most important things in a successful relationship is how well you work together,” Scott said. “I’m very involved with how and who we’re going to pick for that role and we’re going to have to have a relationship like brothers moving forward. That’s what yields the most success. So I want to put my input into it – as much as it’s taken. Obviously, it’s not my decision. I don’t sign people on the dotted line. But I feel like my input is welcomed and I appreciate that with the situation at RCR.

“Still, it’s a process that we have to vet throughout the team. We have to figure out who is going to be the right fit. We have a lot of good candidates. NASCAR is a community. It’s a family and there’s a lot of great people within the industry and we’re very blessed for that.

“We’ve got a lot of people that we’re talking to and we’re trying to figure out who will fit best with our team.”

Scott missed finishing third in the NNS standings on a tie-breaker to Sadler, who won at Talladega Superspeedway last month. Scott feels to elevate his effort he must improve on restarts and communication with his team – “but that comes with experience”.

I need to be a better driver for my team if I ever want to sit at that championship table.

“When you can communicate the best and most effectively with your team, you’re going to be successful,” Scott said. “The guy standing next to me, Brad Keselowski, I feel like he’s a really good communicator with his crew chief Paul Wolfe and I look to copy him on certain things but to improve and be my own person.

“We have to work at this thing 33 weeks out of the year and communication and talking is a big part of that. Obviously, you need to have speed and you need to have talent. I think we have those pieces. I can always be a better driver. I need to be a better driver for my team if I ever want to sit at that championship table. I need to improve some things – and I’m working on that.

"Luckily, we’ve got a good support group. We’ve got good people standing and supporting us and turning wrenches on these Chevys and it’s going to get better. And we’re going to be there next year, I feel like.”

One year at a time

While Scott’s deal with RCR remains year-to-year due to “the nature of the sport”, he’s looks to grow his relationships with existing sponsors that want to “be on board for the long term”. He expects to unveil next year’s sponsor soon and build his racing effort into a multi-year program.

After competing in a career-high six Sprint Cup starts in 2014 – and winning his first Cup pole at Talladega – Scott is looking to expand his schedule to 10 races next season. He says the seat time in the Cup cars sharpens his skills when he climbs back into his Nationwide ride.

“Running the Cup races has been the best thing for my Nationwide career,” Scott said. “I feel like every time I’m in the Cup car and then come to the Nationwide car I’m better equipped and more prepared for what happens and more competitive.

"So often the Nationwide Series runs the same Goodyear tire that the Sprint Cup Series runs and you can learn what it does throughout the course of a run and it can be a huge benefit. Any time behind the wheel is helpful fora driver.”