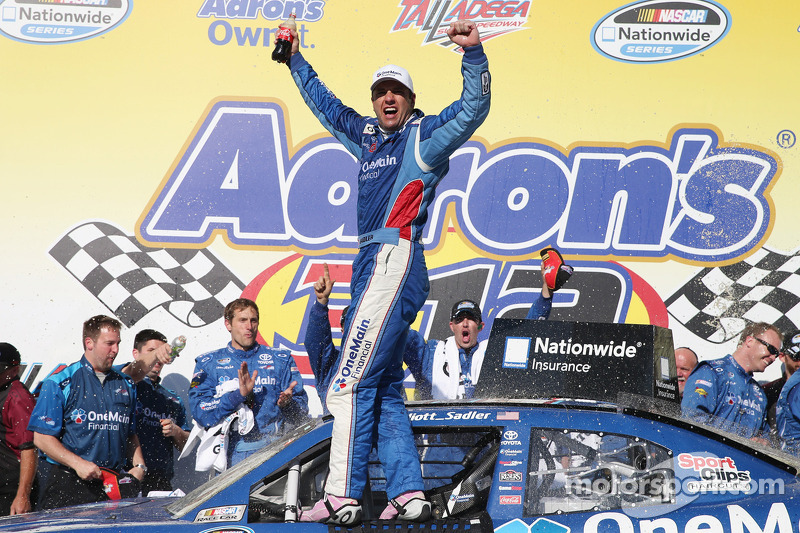 Elliott Sadler won his first Nationwide race since August of 2012 in what was another riveting event at Talladega Superspeedway.

Elliott Sadler managed to come out unscathed after two late-race cautions, the last leading to a red flag, in the final 10 laps of the Aaron's 312 NASCAR Nationwide Series race at Talladega (Ala.) Superspeedway on Saturday to drive his No. 11 Joe Gibbs Racing Toyota into victory lane and celebrate his first win since August 2012 and his first-career victory at Talladega.

"We just got on the inside line, there, and had to make some moves," Sadler said. "Under the red flag, I was thinking through all the scenarios."

Chris Buescher claimed his career-best Nationwide finish, finishing second in the No. 60 Roush Fenway Racing Ford. Regan Smith was third in the No. 7 JR Motorsports Chevrolet.

"I don't know what I was trying to do," Smith said. "I was just trying to get somewhere I had a little daylight in front of me." Joe Gibbs Racing started in the first three positions, with Sam Hornish on the pole for his return to Nationwide Series competition in the No. 54 JGR Toyota. Sadler started second and teammate Darrell Wallace Jr. started third in his first Nationwide race of the season from behind the No. 20 Toyota. Meanwhile, the three Junior Motorsports entries -- Smith, the No. 9 Chevrolet of Chase Elliott and the No. 5 Chevy of Kasey Kahne -- started in the back after struggling in qualifying on Friday.

The No. 16 Roush Fenway Racing Ford of Ryan Reed got by the Joe Gibbs Racing brigade and took the on the first lap and remained up front until the first caution came out on lap 28. Sadler took the lead on the restart that followed.

As the JRM teammates made their ways up through the field, the JGR cars remained near the front. Wallace, though, saw his race end early when he got caught up in an incident with the No. 99 RAB Racing Toyota of James Buescher and the No. 31 Turner Scott Motorsports Chevrolet of Dylan Kwasniewski on lap 44 of the 117-lap race.

"I tried to stay out of the storm of what happens here at Talladega," Wallace said. According to Buescher, the incident began when the No. 22 Team Penske Ford of Ryan Blaney pushed him on the wrong part of his bumper.

With Wallace out of the race, Sadler and Hornish continued on at or near the front. Smith got off pit road first to take the lead during a lap 83 caution, and soon after the restart, teammates Kahne and Elliott were right behind him. Meanwhile, Sadler and Hornish led the outside line that was several car lengths back. David Starr also had his No. 44 TriStar Motorsports Toyota in the mix.

Elliott took the lead just before a yellow flag with 10 laps to go, but when the race returned to green, Blaney pushed Starr out to the lead and then took the top spot for himself.

As that was going one, there was a multi-car wrech involving Kahne and Blaney, among others. Elliott also received damage to his car from the incident. With five laps remaining, NASCAR issued the red flag for track clean-up.

"We had a really good Great Clips Chevrolet," Kahne said. "We were right in the middle of it the whole race."

The race restarted with Sadler in the lead and Buescher in second. The No. 98 DenBeste Racing Ford of David Ragan pushed Sadler out to the front, and while it was every man for himself in the final laps, Sadler looked to go into defense mode, attempting to block both lanes of traffic behind him.

Ragan wound up fourth and Hornish rounded out the top-five. Joe Nemechek was sixth in the No. 87 NEMCO-Jay Robinson Racing Toyota, JJ Yeley seventh in the No. 28 JGL Dodge, Landon Cassill eighth in the No. 01 JD Motorsports Chevrolet, Starr finished ninth, and Trevor Bayne was 10th in the No. 6 Roush Fenway Racing Ford.

Sadler led a race-high 40 laps, while Reed was up front for 29. There were seven cautions throughout the race for a total of 29 laps. Just one point now separates championship leader Chase Elliott and Elliott Sadler.