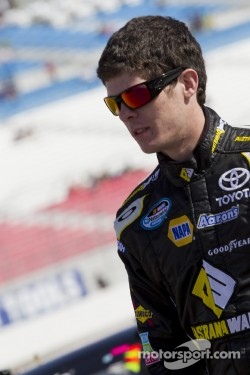 Saturday marks the 19-year-old’s first trip to the 1.33-mile concrete track and his 12th Nationwide Series start. The 2009 & 2010 K&N Pro Series East Champion is scheduled to race at least 10 races in 2011 while action sport star Travis Pastrana will drive the No. 99 in seven races beginning at Indianapolis in July.

Truex underwent corrective surgery to repair a fractured right wrist on March 29. He injured his wrist on a dirt bike about two years ago. The left-handed Truex said, “in these longer Nationwide races it started becoming more and more of a problem. It was time to get it fixed. It’s really not that big of deal.” David Reutimann substituted for Truex at Texas and Michael Waltrip raced the No. 99 at Talladega last week.

RYAN TRUEX ON HIS WRIST: “I am not feeling any pain and I can tell it’s getting better each day. I am starting to get back in the gym and doing as much as I can to get the strength back in it. I will still have a cast on it in Nashville but it won’t effect my driving at all. The doctor built my cast around the steering wheel and we’ve been working with NASCAR so I won’t have any problems gripping the wheel or anything like that. It’s been tough watching the No. 99 on the track without me behind the wheel so I am ready to drive again at Nashville.”

My wrist is starting to feel a lot better.

ON RACING AGAINST CUP DRIVERS: “I like racing against the cup guys every week. If you want to be the best you have to compete against the best. However, we need some momentum on our side right now so I am looking forward to only having five fulltime cup drivers in the field at Nashville this weekend. We have a really good chance to score my first top 10 in the series this weekend.”