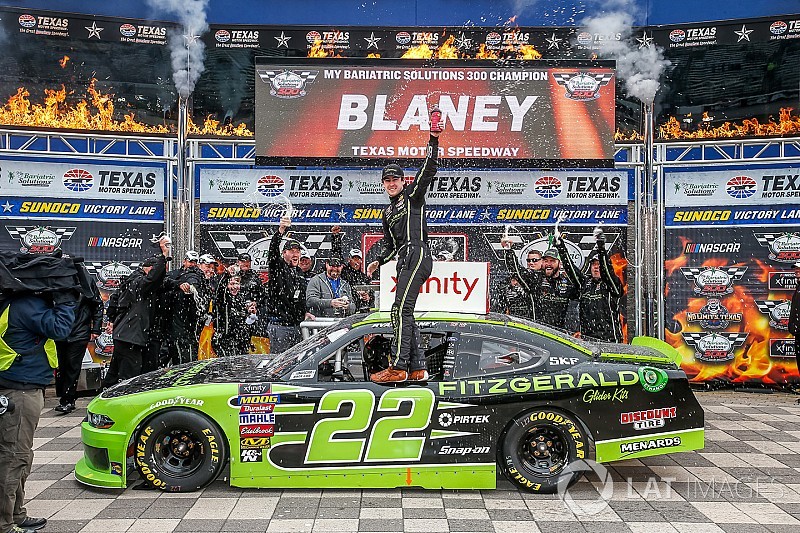 Blaney, driving Team Penske’s No. 22 Ford, started on the pole and dominated Saturday’s My Bariatric Solutions 300 nearly from start to finish, leading 132 of the 200 laps.

He held off Christopher Bell by a comfortable margin of 2.327 to earn his first series victory of the season in his second start. It’s the seventh win of his career and first at Texas Motor Speedway.

As he has done in a previous victory, Blaney stopped on the frontstretch after the race and handed the checkered flag to a young fan on the other side of the fence.

“This Mustang was amazing all weekend, really,” Blaney said in Victory Lane. “There were different strategies in that second stage and we had to come from behind a little bit.

“The car was great and pit stops were great all day. I couldn’t ask more from this team. We finally got to win one here in Texas.”

Asked why giving the checkered flag to a fan is important to him, Blaney said, “Whenever you can see them up close and personal and see how excited everybody is to be here, that’s a bonus for us. It makes us feel like we put on a really good show.

“It was unbelievable how many kids were in stands and at the fence and really pumped up. Hopefully, they had a great time. My main thing is trying to make a memory that will last a lifetime for them.”

Blaney took the lead from Hemric with 68 of 200 laps remaining. With 57 to go, Blaney made his final green-flag pit stop and once the cycle of stops had completed, he moved back into the lead with 46 laps remaining. He was never seriously challenged after that.

The four drivers eligible to compete for the $100,000 Dash 4 Cash bonus in next weekend’s race at Bristol (Tenn.) Motor Speedway are Bell, Hemric, Custer and Preece.

“Monday morning we had three goals coming to Texas – qualifying good, which we started third, get stage points, which we almost got the max amount of stage points and bonuses we possibly could, and to finish top five and I think we were on our way to do that,” Jones said.

“Just disappointed, man. I want to prove so bad that I can run in the top-five and I think we were going to today. We’ve got plenty of races left and we’ll make sure we do it again soon.”

Jones, who stayed out under the last caution, held off Ryan Truex in a one-lap dash to claim the Stage 2 victory.

Sieg was third, Ross Chastain fourth and Ryan Reed completed the top-five. All of the top five had stayed out under the last caution.

Blaney was first off pit road after stops during the break between Stages 1 and 2 and remained in the lead as Stage 2 got underway.

Just as the stage went green, Justin Allgaier took his car to the garage in an attempt to diagnose the issues he was having with the engine in his JR Motorsports Chevrolet.

On Lap 66, Tyler Reddick fell off the pace after he appeared to scrub the wall and made contact with Ryan Reed.

With 20 laps remaining in Stage 2, Spencer Gallagher spun off Turn 4 after racing side-by-side with Reed, bringing out a caution. On the restart on Lap 76, Blaney remained in command of the race.

Bell powered around Blaney and Preece to take the lead on the restart as Blaney dropped back to fourth and Kevin Harvick moved up to third.

Chad Finchum wrecked on Lap 81 between Turns 1 and 2, which brought out another caution. During the caution most of the lead-lap cars pit with Bell exiting pit road first but he was penalized for having an uncontrolled tire.

Jones remained on the track and inherited the lead on the restart on Lap 89. He was followed by Reed and Truex (both of whom also stayed out).

Blaney, who started on the pole, dominated the first 45-lap segment and led every lap on his way to the Stage 1 victory.

Jones was second, Reddick third, Preece was fourth and Truex completed the top-five.

Harvick, who started the race in last place when his car failed to clear inspection in time to participate in qualifying, made his way up to eighth by the end of the stage.

Finchum brought out the first caution on Lap 2, spinning off of Turn 2. On the restart on Lap 6, Blaney continued to lead the way.

Jamie McMurray spun on the frontstretch to bring out another caution on Lap 9. On the restart on Lap 14, Blaney remained out front.

Vinnie Miller spun in Turn 2 and backed into the wall to bring out a caution on Lap 17. The race returned to green on Lap 21.

On Lap 34, Allgaier radioed his crew and said his No. 7 Chevrolet may have dropped a cylinder and he began falling back in the field. He ended up 17th in the first stage.

Gallagher was forced to start the race from the rear of the field for making unapproved adjustments to his No. 23 Chevrolet during the impound.

Five things to watch in Saturday's Xfinity race at Texas

Cindric on early damage at Daytona: ‘Salvaged a great day out of it’