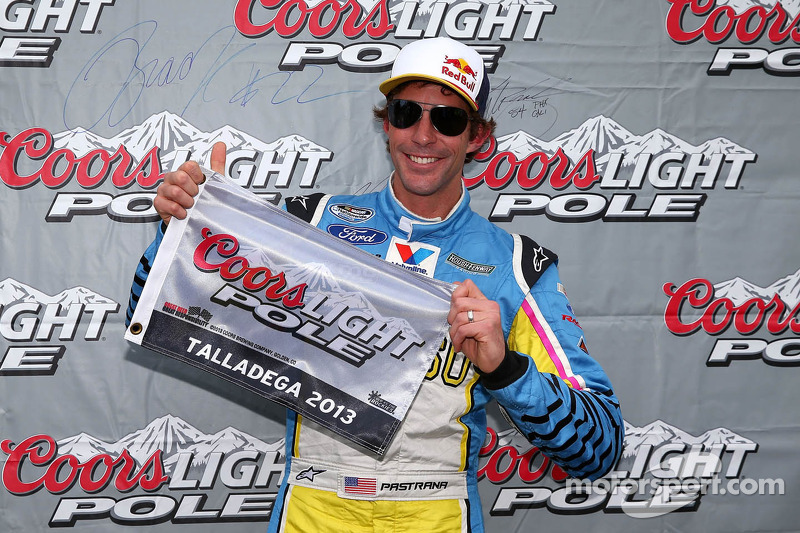 Qualifying for the Aaron's 312 NASCAR Nationwide race ended with a surprise when Travis Pastrana took the pole position in his No. 60 Roush Fenway Racing Ford!

Travis Pastrana turned in a 54.255-second lap at Talladega (Ala.) Superspeedway on Friday from behind the wheel of the No. 60 Roush Fenway Racing Ford to claim the pole starting spot on Saturday's Aaron's 312 NASCAR Nationwide Series race at the track. It's his first-career pole in 17 series attempts. It's also car owner Jack Roush's first Nationwide Series pole at Talladega.

"I'm still a newcomer to restrictor plate races, but I know I will have a great car," Pastrana said.

After his pole run, Pastrana referred to starting in the number one spot as a "dream come true."

Pastrana will share the front row on Saturday with Austin Dillon, driver of the No. 3 Richard Childress Racing Chevrolet. Trevor Bayne qualified third in the No. 6 Roush Fenway Racing Ford to give RFR two of the top-three spots on the starting grid.

Danica Patrick, at one time, occupied the provisional pole spot with her No. 34 Turner Scott Motorsports Chevrolet, but she was knocked from atop the scoring pylon by Pastrana. By the end of qualifying, she was shuffled back to fourth. Her TSM teammate, Justin Allgaier in the No. 31 Chevrolet, will start fifth on Saturday.

"I really enjoy racing at the superspeedways, and Turner Scott Motorsports has a great superspeedway package," Patrick said. "We had a great run going in Daytona, and I'm hoping we can pick up where we left off."

Regan Smith gets the win at Talladega