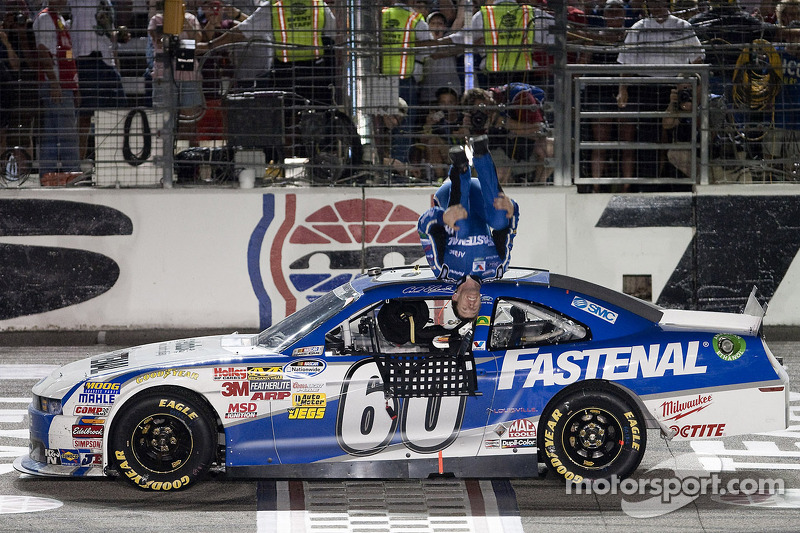 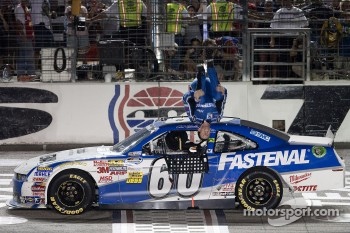 The victory was Edwards’ second at Texas, his first of the season, the 30th of his career and the first for the new Ford Mustang in the Nationwide Series.

“I was pretty concerned (with Keselowski)—he was so fast down there on the bottom in (Turns) 3 and 4, and he kept getting a run,” Edwards said in victory lane. “So I stayed high, and I could pull him off the corner.

“His teammate (Sam Hornish Jr.) was kind of working for him there, helping him out (attempting to block Edwards as Keselowski closed in). That almost got him by me, but I was able to get by (Hornish). That was pretty wild.”

Keselowski, last year’s Nationwide Series champion, finally finished a race as well as he ran it. Tire issues have plagued Keselowski all season; his previous best finish this year was 15th at Phoenix.

“We ran like we did all year last year tonight and made some great adjustments on the car, unloaded really well and just came up a little bit short,” Keselowski said. “I felt like if we could have cleared Carl Edwards coming off of pit road there (after Edwards stopped with 11 laps left) and got the clean air there, I felt like I might have been able to hold him off. 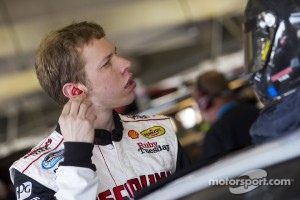 “We were both really even there at the end, and it kind of came down to clean air. But he drove a good race.”

Kyle Busch, who was gunning for his third consecutive win and fourth of the season, was chasing Edwards for the lead on Lap 88 of 200 when the No. 52 Chevrolet of Tim Schendel blew a tire and slid up into Busch’s path. With no room to maneuver and no time to react, Busch slammed into the back of Schendel’s car, knocking Busch’s No. 18 Toyota out of the race.

“It felt like we were probably the only car that was going to give Carl a shot. It’s a shame that we didn’t have the chance to race it out the rest of the night.” Edwards had mixed feelings about Busch’s departure.

“If he hadn’t gotten knocked out, he would have been the competition tonight—he was fast,” Edwards said. “It’s fortunate that we missed that wreck, and I hate it for him. I think it would have been a really good race between us.”