At Circuit Gilles-Villeneuve, the fans were celebrating as Jacques Villeneuve earned the NASCAR Nationwide pole in Montreal

“After our good showing at Elkhart Lake (at Road America in June), I know the No. 22 Discount Tire/Ruby Tuesday Dodge will be competitive, and together with the Penske team, we’ll definitely be turning up with the goal of winning,” Villeneuve said.

Jason Leffler, in the No. 38 Turner Motorsports Chevrolet, was the highest qualifier among series regulars with a lap time of 102.165 seconds. He starts third on Saturday. Scott Speed starts alongside Leffler in the second row. He drove the No. 33 Kevin Harvick Inc. Chevrolet around the road course in 102.284 seconds to claim the fourth starting spot.

“Having back-to-back road course races allows us to stay in the mindset of running a road course,” Leffler said of the Nationwide Series racing in Montreal a week after taking on the road course at Watkins Glen International. “Coming fresh off of the Watkins Glen race, I’m still in that mode.”

Michael McDowell claimed the fifth starting position for the No. 18 Joe Gibbs Racing Toyota with a 102.363-second lap, and he’ll be joined on the third rob by Robby Gordon in the No. 77 Robby Gordon Motorsports Dodge. Gordon had the sixth fastest qualifying time at 102.365 seconds.

Most of the top-six in qualifying came out of the final two qualifying groups, with Gordon and McDowell running in group seven and Villeneuve, Tagliani, and Speed going out in the eighth and final group. Leffler was the only driver from an earlier group to claim a spot within the first three rows on the starting grid. He was a part of group five. 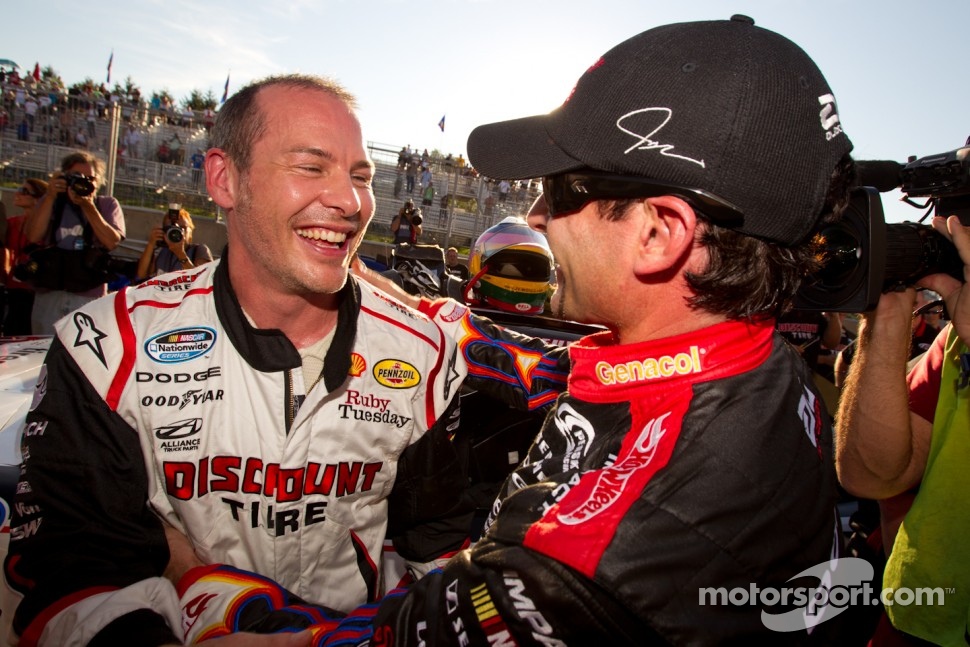 Ambrose gets his Montreal victory

Three playoff contenders in the NASCAR Xfinity Series were taken out in a huge nine-car wreck at Texas Motor Speedway on Saturday.

On much older tires, Noah Gragson fended off a furious charge from Brandon Jones and held on to win Friday night’s NASCAR Xfinity Series race at Bristol (Tenn.) Motor Speedway.