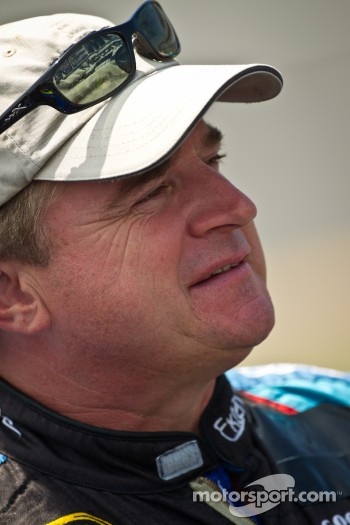 How was your race at Lucas Oil Raceway? “Let’s just talk about this whole day. Man, we started out here -- I’d never seen this race track. I grew up racing short tracks but that doesn’t mean anything. These guys did an amazing job all day long. We struggled in practice. We never really found the balance that was comfortable for me to make fast laps. We got racing and we were right where we ended up in practice -- we just weren’t good. We were fighting really tight conditions in the center and really free on the exit. Adam (Stevens, crew chief) and the guys kept busting their tail and we kept our nose clean all night long. That’s the most important thing to do out here in this series. If you can stay clean and last to the end, you can get a solid finish and that’s what we did -- just attrition. I just can’t thank SportClips, everybody at Joe Gibbs Racing and Toyota -- everybody for their hard work and giving me this opportunity. This has been a blast. I hope I get to do some more.”

What happened on the green-white-checkered finish? “That’s just hard racing. Michael (McDowell) was getting pushed from behind and I think he got pushed into us and got us really loose. We all but wrecked, just bouncing around like a ping pong ball on the backstretch. Finally gathered it up and salvaged a good finish. This is just a long day. It’s very gratifying though to struggle like we did and have the guys continue to bust their tails. The guys in the pits did an amazing job with pit stops. All day we gained spots. I even got busted earlier with a speeding penalty and had to go to the rear and fought our way back. It was just a long day. I’m glad it ended up as good as it did.”

How did you get shuffled back on the final restart? “That was just a result of a green-white-checkered and I got in the wrong lane. Drew (Herring) got a little sideways and just had to roll out of the gas and as soon as I did, I lost three or four spots. Really unfortunate for the Muscle Milk Toyota. We were pretty good tonight and ran in the top-five most of the night. Just didn’t get that last green-white-checkered -- seems like the last few weekends that has been the case for me.”

Are you looking forward to running the 18 car over the coming two races? “Get some momentum with these 18 guys -- Jason Ratcliff (crew chief). Just want to thank everyone at Joe Gibbs Racing. It’s a great opportunity and very thankful for it.”

What happened on the race track? “I was just trying to pass lap traffic there. I knew I had cars with newer tires behind me and we took two tires there. I was just trying to hang on and kept getting looser and looser as our run was going. I was trying to pass the cars probably quicker than I needed to. It was getting there towards the end of the race and couldn’t waste any time. I tried it and couldn’t handle it getting into the corner.”

What were you thinking when your teammate Steve Wallace was about to hit you? “It was horrible, I was already trying to grab switches so we didn’t go a lap down and try to get it repaired. I just saw Steve (Wallace) -- he checked up for the wreck and someone got into him. It’s a shame to tear up both Rusty Wallace Racing cars, they were both really good tonight. We ran top-10 all night and next weekend is Iowa and that’s the big one for us.”

What happened that took you out of the race? “I got loose there underneath the 40 (Tim Andrews) -- I think we were lapping him for about the 10th time tonight. We did take two tires and we didn’t have four -- I knew the 18 (Michael McDowell) and the 22 (Brad Keselowski) were behind me on four and I didn’t want to waste any time. I got a couple car lengths on them after we battled for about 50 laps door to door. I was probably over aggressive on my part, but it’s just a shame to tear up a good race car -- actually two Rusty Wallace Racing cars. I heard Steven (Wallace) I guess got jacked up from behind slowing up for the wreck when the guy behind him didn’t see it and tore us both up. Just a shame, but we have Iowa next weekend and that’s a big one for us.”

Were you upset with Tim Andrews after the accident? “He (Tim Andrews) came over to the window and he said we ruined both our nights. I said, ‘But your night was ruined before the race even started because you were planning on running around 20 miles off the pace.’ I just don’t appreciate anyone coming up to my window like that. We can talk about it out here afterwards. I just wanted to make sure right away that he knew that wasn’t cool with me.”

What happened that took you out of the race? “I don’t really know what happened. Our 5-Hour Energy Toyota -- we kept working on it all night long and kept making it better and better. My spotter came over the radio and said there was a crash in front of you and by that time, me and James Buescher were racing hard. We raced about 15 or 20 laps and finally got underneath of him and got him cleared. He bumped me a little bit getting into turn three and at the same time my spotter said, ‘Check up, check up, check up.’ I got in the brakes and the care got sideways. It just slid all the way through the corner and there was nothing I could do except try to nail it to accelerate away from Michael (Annett). It was just one of those racing deals. I hate it for both of our cars. Both of our cars were running good and we were getting better. It’s just one of those things.”

What happened to take you out of the race? “I’m not real sure what happened in front of me. Two cars got together, they got spun out and me and James Buescher were racing side-by-side for about 15 to 20 laps and I finally cleared him and then my spotter said check-up, check-up because the guys were crashing in front of me. By the time I got in the brakes, I got hit in the rear a little bit and shot me sideways getting into turn three. You’re on the brakes so hard at that point, right when I got hit, I got on the brakes. The car got sideways, I tried to get in the gas and tried to accelerate away from those guys. I had nowhere to go. We hate it for the Pilot guys and 5-Hour Energy guys -- we had a good car tonight, so did Michael (Annett). It’s one of those racing things. We’ll go to Iowa and give a run at it again, I guess.”