Robert Richardson, Jr. has a “23” night at Iowa Speedway for R3 Motorsports

Robert Richardson, Jr. and the No. 23 North Texas Pipe Dodge team of R3 Motorsports had a cyclical race at Iowa Speedway during Saturday night’s NASCAR Nationwide Series event coming back right to where they started 250 laps later.

After posting the 24th-fastest time in the final practice on Friday evening, Richardson and team backed that up by qualifying 23rd for the race on Saturday afternoon. Once the green flag fell over the .75-mile oval at dusk, Richardson settled into a top-25 running position fluctuating up and down the scoring chart within a few positions of where they started.

Taking advantage of cautions on laps 24 and 49, Richardson was called down pit road by crew chief Walter Giles for tires, fuel and air pressure adjustments to get the car better. They didn’t have much to do because Richardson was saying the car was handing great through the turns. 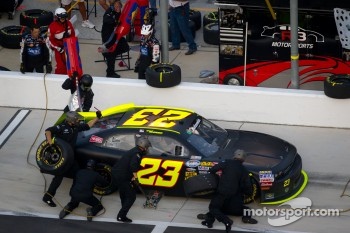 As the air and track temperatures started to cool once the sun set over the Midwestern plains, the 29-year old driver was looking forward to the track coming to his car later in the race.

However, the team’s progress upward on the scoring pylon was slowed when an overheating engine occurred under green. This forced the No. 23 North Texas Pipe Chevrolet down pit road to cool it off and see what was causing the rise in temperature.

Giles directed the efforts enabling Richardson a return to action and good to go for the remainder of the race. Despite losing some laps on pit road, the good news was he could keep racing towards the checkered flag.

Some late race cautions on lap 154 and 185 allowed for more adjustments, the chance to double check the engine wouldn’t overheat and, for one of them, Giles called for the wave around to make up some laps.

Richardson was logging great lap times keeping up with cars in the top-20 and even some in the top-15, at times. Unfortunately, they were trapped too far down on laps to take advantage of those commendable lap times and race it out for a good finish.

When the race was said and done, Richardson completed the “23 cycle” by finishing right where he started – in 23rd place; in their No. 23 car. Knowing they have a good car ready to race again in the future will keep driver and team looking forward to their next outing.

This weekend, the NNS will race The Glen of Watkins Glen International for their second road course race of the year. Alex Kennedy will return to action for the team, just like last year.

Robert Richardson, Jr. Quotes: “That was, by far, the absolute best car I have ever driven at Iowa Speedway. We could corner just right, the speeds were consistent and it was just a great-running car all weekend.

“It’s too bad we had that overheating problem in the middle of the race and had to come to pit road under green. We lost some laps, but Walter (Giles, crew chief) and team was able to get us good to go again so we could finish the race.

“We just kept at it for the rest of the race to get a good finish. They kept telling me were running some good top-20 lap times, just too bad we couldn’t get up there to race with those guys like we wanted.

“Taking advantage of the wave around was a good call, just too bad we didn’t get a chance to do more of them. So, we’ll have Alex Kennedy in the car next week at Watkins Glen and I’m going to go up and help spot for him, so that should be fun.”