Klingerman in Penske car at Bristol 250 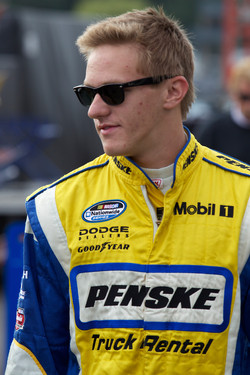 "Parker Kligerman will drive the No. 22 Discount Tire Dodge this weekend in the NASCAR Nationwide Series race at Bristol Motor Speedway. Brad Keselowski is still healing from an ankle fracture and strained back suffered in his testing accident at Road Atlanta earlier this month. Brad's condition will continue to be monitored on a race-by-race basis." - Tim Cindric,Penske Racing

The No. 22 Discount Tire Dodge Challenger in 2011... After 23 events, the reigning NNS champion No. 22 Discount Tire Dodge Challenger team is ranked seventh in the 2011 NASCAR Nationwide Series (NNS) owner point standings. The team is coming off a 27th-place finish in the Napa Auto Parts 200 presented by Dodge last weekend at Montreal’s Circuit Gilles Villeneuve as Jacques Villeneuve filled in for Keselowski behind the wheel.

Depth Charge… There are few organizations within NASCAR that could withstand an injury to a championship-caliber driver the way Penske Racing has since Keselowski was injured in a testing accident at Road Atlanta earlier this month. Over the last four races, including one with Keselowski as the driver, of the No. 22 car, the team has compiled two wins and two pole awards, with Kurt Busch, Sam Hornish, Jr. and Jacques Villeneuve all lending championship credentials to the seat.

Kligerman 2010 Bristol Rewind… After starting from the 43rd position in last year’s Food City 250 at BMS, Kligerman raced his way to a ninth-

“Make no mistake, this is Brad Keselowski’s seat, but it is a big opportunity for me. It’s not often that drivers get the opportunity to jump into a championship-winning car. Therefore, I look forward to representing Discount Tire as best I can this weekend. Our last race together was Daytona last July and we hope to replicate the success that we had together there (Kligerman qualified second and finished 13th). Bristol is where I got my first top-10 in the Nationwide Series and I think with (crew chief) Todd Gordon and the guys building fast racecars, we can produce similar results. I appreciate Mr. Penske, Brad and everyone at Penske Racing for having the confidence in me to drive the Discount Tire Challenger at one of my favorite tracks.”

“Racing 750 miles at Bristol (the combined total of the Cup and Nationwide Series races this weekend) is hard on someone that isn’t injured the way Brad is and we all want him to get back to 100% as quickly as possible. We’re all pulling together to make sure we don’t miss a beat in his absence. Parker has already done a great job in helping set up the Discount Tire Dodges at several times this year when Brad couldn’t make it to practice, including Indianapolis where Brad was able to drive the car to victory. If you look at the NASCAR Camping World Truck Series program at Brad Keselowski Racing, Parker has made a lot of strides as a driver over there. He had a great race at Bristol last year and I’m excited to work with him. We’ve had a lot of outstanding drivers – championship-caliber drivers – fill the seat over the last three races. I’ve enjoyed working with all of them and I think Parker will continue the roll we’ve been on.”

Gragson, Hemric collide on pit road and then fight post-race