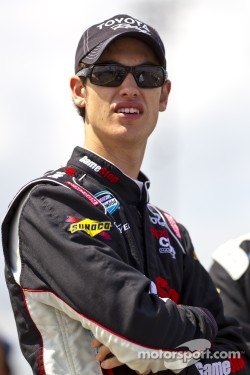 KANSAS IS THE NEW KENTUCKY???: Joey Logano is well known for his record at Kentucky Speedway. Prior to this season, Logano scored three-straight poles and three-straight victories at the 1.5-mile track. This year, a fuel mileage race ensued and Logano was left with 10th-place finish after having to go into gas conservation mode late. However, Kentucky isn’t the only track that Logano shows a fond liking to. In fact, now that his Kentucky streak is over, Logano might be able to start a new three-peat at Kansas Speedway. Logano has won the last two NASCAR Nationwide Series events at Kansas Speedway and will be looking to make it three-in-a-row this weekend in the Kansas Lottery 300. Logano won at Kansas in 2009 after starting from the seventh position and holding off a spirited charge from teammate Kyle Busch. Logano then backed it up last year, grabbing the pole and winning again, leading the final six laps after grabbing the lead once again from Busch.

No. 18 TEAM STILL LEADING POINTS, GETTING TIGHT: Joey Logano will help the No. 18 Joe Gibbs Racing Toyota continue its quest for the 2011 NASCAR Nationwide Series Owner’s Championship this weekend at Kansas Speedway. The last two weekends, the No. 60 Roush Fenway team has cut into the lead of the No. 18 Toyota, which now stands at 13 points with just five races remaining in the 2011 Nationwide Series season. Logano and the No. 18 team have an 81-point lead over the No. 6 team of Roush Fenway Racing, who sits in third. This season, the No. 18 Joe Gibbs Racing Toyota team has recorded seven wins, 16 top-five finishes and 22 top-10s. Drivers who have shared the ride this season include Kyle Busch (18 starts, two poles, seven wins, 16 top-10s), Michael McDowell (five starts, one pole, four top-10s), Kelly Bires (two starts, one top-10) and Drew Herring (one start, one top-10), along with two starts for Logano.

CHASSIS: The JGR team will bring chassis #117 to the track this weekend at Kansas. That particular chassis has been a long-time backup and will see its first race of the year as a primary. Chassis #132 will serve as the team’s backup car.

Joey Logano Quotes: “Everyone always talks to me about Kentucky and I love that track for obvious reasons, but I’ve been fortunate enough to have a lot of success at Kansas Speedway as well and I really enjoy going to that track and running there. Yeah, there are similarities between Kentucky and Kansas and that sure has helped over the years, but it doesn’t matter if you were to try and build two identical tracks in every sense of the word, there would still be differences between the two of them and you know those differences when you get to the track. I’ve always been really comfortable on the mile-and-a-half tracks and that has showed with my past performance. I think I have something like six wins on those style of tracks. And working with Joe Gibbs Racing doesn’t hurt. We’ve always been strong on the mile-and-a-halfs.

“We’ve had a couple of tough weeks the last two times out in the Nationwide car, so I’m ready to get back to the front and challenge for the win. We had something wrong with the car in Chicagoland that was beyond our control and last week at Dover, we were strong, especially there at the end but we got caught a couple of laps down by an ill-timed caution. There is nothing you can do about stuff like that. The best thing you can do it just bounce back and that is the plan this weekend in Kansas.

“I’m looking forward to wrapping up the season with GameStop. We’ve got five races left and all five will be with them. We haven’t been able to get them a win yet, but I feel pretty good it will happen at one of these five races before the season is out. Kansas, Charlotte, Texas, Phoenix and Homestead are all really good tracks for me and for JGR. And there is a lot of incentive to get GameStop a win before the year is out. I’m going for it these last five races, that’s for sure.”