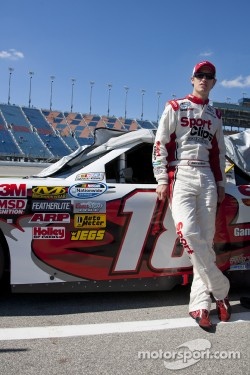 LOGANO WANTS TO GO “THE EXTRA MILE” AT DOVER: Joey Logano was just one-mile away from victory in the spring race at Dover International Speedway. One more lap around the track and Logano could have earned his first victory of the 2011 NASCAR Nationwide Series season. Instead, that last lap will be remembered for one of the scariest and more hair-raising crashes for the 2011 season thus far. Coming to the white flag, second-place driver Carl Edward’s car got loose while underneath Logano’s, slid up the track and got Logano aero loose. Logano’s car slid up the track, hit the outside wall and came back across the track, collecting several other cars in the process. As a result, the race ended under caution and Logano was credited with a 13th-place finish.

No. 18 TEAM STILL LOOKING FOR POINTS CHAMPIONSHIP: Despite a frustrating 19th-place finish in the last NASCAR Nationwide Series event at Chicagoland Speedway, Logano and the No. 18 Sport Clips Toyota team for Joe Gibbs Racing still lead in the NASCAR Nationwide Series Owner’s Championship point standings. Heading into this weekend’s event at Dover, the No. 18 team holds a 30-point lead in the standings over the No. 60 Roush-Fenway Racing team and an 89-point lead over the No. 6 Roush-Fenway Racing team with just six races remaining. With Kyle Busch, the regular driver of the No. 18 JGR Toyota, taking a few Nationwide Series events off at the end of the season to focus more on the Chase for the Sprint Cup, Logano is jumping into the seat for four of the final seven races of the season. In addition to the Chicagoland and Dover races, Logano is also scheduled to race the No. 18 at Kansas and Phoenix. When taking the green at Chicagoland, Logano became the fifth different driver to spend time behind the wheel of the No. 18 this season. In addition to Logano and Busch, Kelly Bires, Michael McDowell and Drew Herring have all driven the No. 18 Joe Gibbs Racing Toyota this season.

CHASSIS: The JGR team will take chassis #121 to Dover International Speedway. The last time that chassis saw that track, it nearly found Victory Lane, where Logano finished second to Kyle Busch in a photo finish at Bristol. Chassis #117 will be the backup.

“Dover is probably one of the coolest tracks that we go to all year long and you see it on the track, because it normally puts on some pretty wild and crazy races, as I’ve been a part of so many times there in the past. Dover is cool just because it is part high-banked short track, but also has some tendencies of a speedway being that it is so fast. It really can be one of the most intimidating tracks we go to too with the unforgiving nature of it. If there is a wreck happening, odds are you are probably going to get involved. I guess they call it the ‘Monster Mile’ for a reason. A lot of people think places like Daytona and Talladega are probably what you would call the more intimidating tracks. But its actually tracks like Dover, Darlington and others that get more of these drivers’ attentions. Tracks like that can be pretty unforgiving.

“I love Dover and, outside of New Hampshire, it’s the closest thing on the schedule I have to a home track. I’ve always had a lot of fans up here. Ever since I came here in the East Series and won the championship, I’ve seen a lot of fans here at the track with my shirts and hats on when we go around the area and do autograph sessions. So now, I really want to win a race here. We had a great car in the Nationwide race here in the spring and were a lap away from finally winning one here when we got into that accident with Carl (Edwards) and Clint (Bowyer). Me and Carl had a great battle that day and it was going to come down to the end between the two of us. Carl just got a little bit loose and slid up the track and got us loose and it was on from there. I remember getting into the wall and thinking ‘whoa this is going to be big.’ Clint got into us when we came back across the track and several other cars piled in. I could see the underneath of Clint’s car and was thinking ‘yep, this is big.’ That is a typical Dover wreck. It’s just too bad because we had a great shot at winning that day.

“Hopefully we can have the same success again this weekend. There is nothing we want and need more than a win for Sport Clips and the No. 18. We want to do all we can to continue and build the lead for the No. 18 car with just a few races to go. It’s going to come down me and Kyle (Busch) to get this Owner’s Championship wrapped up. That is what this organization is fighting for. We want to win races every weekend, but we also want this Owner’s Championship. We struggled at Chicagoland, so there is nothing better we can do than to come back and get a win here at Dover.”