Alex Kennedy ready for the race at The Glen

Alex Kennedy to take twists of Watkins Glen in No. 23 Primalyn Enterprises/Dream Factory Chevrolet
Cornell Racing also on board this weekend 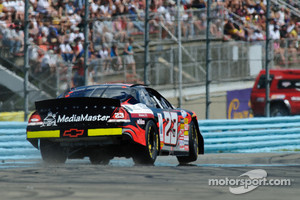 CHINA GROVE, N.C. – Alex “Kid” Kennedy already knows his way around the 11-turn road course of Watkins Glen International having competed in last year’s NASCAR Nationwide Series race. This time, however, he wants a much better finish than his 16th-place effort from 2010.

With more races under his belt since then, the 19-year old driver from Aztec, N.M. has learned even more as he heads to the Central New York track. With some great backing from Primalyn Enterprises out of Rochester, N.Y., who moved from an associate role last year to a primary partnership this year, Kennedy will also be representing the charity of Dream Factory on the car; along with Cornell Racing.

After a top-15 run at Road America was thwarted when he was pushed off the track in June under the white flag, the up-and-coming driver is even more determined to show what he – and R3 Motorsports – can do this weekend.

Fast Facts: This will be Kennedy’s 10th career NNS start. His previous nine starts have been a mix of road course, short track and one speedway. Through that, his best start took place Road America, which was also his first start, of 15th. His best finish was at Watkins Glen in 2010.

Track Facts: This will be Kennedy’s second NNS start at the 11-turn road course, but third overall NASCAR start there. In 2009, he ran a K&N Pro East Series race finishing an impressive eighth. In this NNS race last year, his start in 23rd place quickly became a top-10 run until a late race caution trapped him a lap down after the red flag was lifted. After getting back on the lead lap via the Lucky Dog, there were too few laps for him to make up the lost difference.

Dream Factory Ambassador: Once again, Kennedy will be hosting people from the Dream Factory, Inc. at the track on Saturday. His involvement with them last year led to them presenting him the President’s Award for his efforts during their annual national banquet.

Tune in for the Win: Kennedy, and the other 49 cars on the entry list, will take part in a two-hour practice session on Friday from 2 to 4 p.m. (ET) on SPEED TV. Then, they will come back on Saturday morning and qualify at 9:45 a.m. before lining up for race time of 1:30 p.m.; which can be seen on ESPN TV, heard on MRN Radio and Sirius XM Radio Ch. 90.

Alex Kennedy Quotes: “We’re looking to back up what we did at Watkins Glen last year; if not improve on that finish. We had a great run going, got into a bit of trouble by no fault of our own and were able to put ourselves back on the lead lap to get a decent finish.

“This will be the third time I’ve raced at this track and that always helps with the comfort level going back again. If everything goes smoothly, there is no reason this No. 23 Primalyn Enterprises Chevrolet can’t have a great run. Everyone at R3 Motorsports has been working hard to get the road course cars ready for this week, and next week at Montreal.

“I’d like to personally thank Primalyn and RJW Enterprises for coming on board for Watkins Glen. Without great people like them, we wouldn’t be able to do what we do in this Nationwide race. So, we’re definitely going to put on a good show for them and the people from Dream Factory that are going to be there, too. “

Penske teammates collide as rain comes down at Bristol