Composite bodies to debut in NASCAR Xfinity Series at Richmond 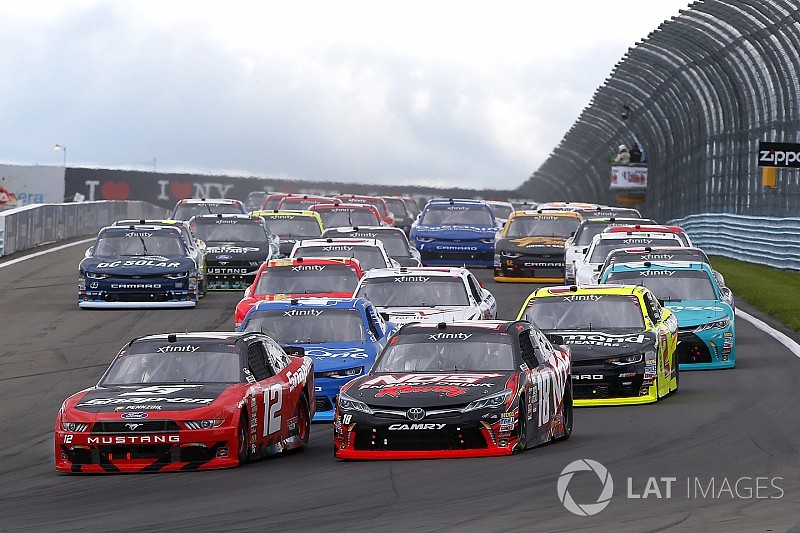 NASCAR officially announced its roll out of the flange-fit composite body for the NASCAR Xfinity Series on Wednesday.

The new bodies — which will comprise of 13 separate panels that attach together on flanges — was a joint effort between NASCAR, the team owners and the manufacturers.

“The flange fit body is a significant advancement and will help maintain a level playing field and contain costs for our owners and our teams in the garage area, the cost and labor as compared to current steel body, and it's a whole lot easier for the teams to be able to repair these,” said Xfinity Series director Wayne Auton during a teleconference on Wednesday.

“If you get into a wall…you have the opportunity during practice to bring the car in and basically put a new body back on your car. It's an exciting time in the NASCAR Xfinity Series.”

Five Star Race Car Bodies of Twin Lakes, Wisc., will be the manufacturer of record for pieces. Five Star also has a satellite distribution center in Troutman, N.C., close to where most of the teams are located. NASCAR has managed the rollout to the teams to assure each team was allotted at least one body before duplicates were assigned. By the end of the month, NASCAR expects each team to have four bodies per car number.

NASCAR performed a wind tunnel test on the composite body concentrating on “durability and deflection of panels” according to Bodine, but did not do a comparison test using the current steel skins.

“The race teams have done that themselves,” Bodine said. “As we spoke of earlier, the extensive collaboration between NASCAR, the race teams, the OEMs, to work through this project, the teams really came up with what the competition parity tools that we were going to use and what those tools should be and what the difference in weight should be and the aero should be.

“From the very beginning, all the teams wanted to make sure that there was no chance that they would want to maybe run a steel body. They wanted to go all in on the flange fit body right away, so that's why we're making sure that the competition adjustments between the two are accurate and enough to make you want to run a flange fit body.”

The composite pieces will fit the current NASCAR Xfinity Series templates used on the steel bodies so the teams will not have to purchase a new set of templates. The composite panels cannot be altered from the original shape to maintain parity in the NXS garage according to Bodine.

“These panels are made of a strong composite laminate blend built to with stand the high speeds of NASCAR racing,” said NASCAR senior director of R&D Brett Bodine. “Several body panels have security features to prevent the teams from tampering with them to gain an advantage.

“We've developed some different processes on this body, the way the flanges mount together with interlocking pieces, and externally on critical areas of the body, we have a security pattern, and these are additional tools for the officials to use through their inspection process.

“These panels have to be used as produced, as manufactured.  They've been working on these cars for several weeks, months, and we anticipate a large majority of the garage ready to go with new bodies at Richmond.”

As for a cost analysis of the project, Bodine couldn't offer an exact savings to the teams. However, he believes the downsizing of fabricators on the well-funded organizations and the reduction of outsourcing on the smaller teams will be beneficial across the board.

“The efficiencies of using a composite flange fit body really are across the board from potentially needing less chassis to do the XFINITY Series because of the turnaround time on repairs, to the actual amount of time it takes to hang a complete new body on a chassis," Bodine said.

"The repairs most likely can be done by the team instead of potentially having to farm it out to a body hanger that they do business with now with the steel bodies. There's a lot of areas that this cost savings of this type body will provide for the team owners.”

Anthony Kumpen returns to the NASCAR Xfinity Series at Mid-Ohio