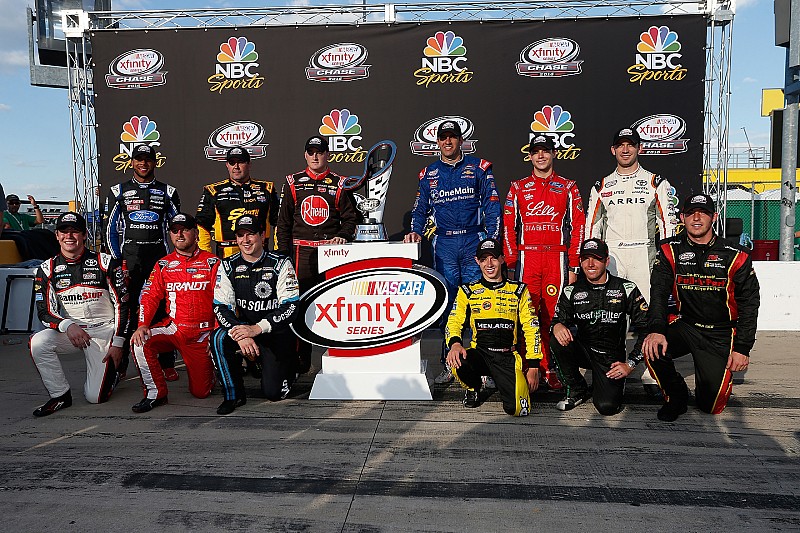 The spotlight will be completely on Xfinity Series regulars as they kick off their first race of the Chase at stand-alone event Kentucky Speedway this weekend.

Here’s how the Chasers stack up entering the VisitMyrtleBeach.com 300:

After winning the NXS race at Chicagoland Speedway on Saturday and moving to the top of the Chase grid, Jones, 20, has plenty of momentum entering the playoffs. Jones finished fourth at the 1.5-mile track in July and has not finished outside the top 10 in his three previous starts in Sparta. His average finish of 4.7 is the tour best among series regulars. With an average qualifying effort of 6.7, Jones is likely to have great track position from the start of the race and will likely add to his total of 39 laps led.

At 41, Sadler brings plenty of experience into the inaugural Chase. He’s the only driver in the NXS playoffs to have also qualified for the first Cup Chase in 2004, when he finished ninth in the final standings. Sadler, who leads the tour with 23 top 10s this season, enjoys a remarkable average finish of eighth and has led 118 laps in 10 starts at Kentucky. He earned the pole for his debut at the track in 2011 and has completed all but one lap in 1971 circuits of competition.

Suarez’s breakthrough Xfinity win came at Michigan in June. Now, he's looking for his first win at Kentucky Speedway. He started from the pole in this race last year, but finished 23rd after leading two laps. Suarez finished third and fourth in his other two starts at the track and can lean on the experience of Joe Gibbs Racing, which has won four times at Kentucky, including in July with Kyle Busch.

The driver of the No. 3 Chevy hopes to be the next Dillon to put his name on the Kentucky trophy. His brother Austin swept the Xfinity races in 2012. Ty Dillon has come close. He’s finished second in this race last year. He won the pole in 2014 and led 155 laps before finishing third. With an average qualifying effort of 7.6, an average finish of 6.8 and an average lap completion rate of 99.9-percent, it’s just a matter of time before the younger Dillon breaks through.

After six years of competition in the XFINITY Series, it’s unusual to say a 30-year-old driver is having a breakout season. But since moving to JR Motorsports, Justin Allgaier has enjoyed a career-high average start of 9.2 and an average finish of 9.5. In 26 starts, Allgaier’s 11 top fives and 21 top 10s are the most he’s amassed in a single season. Although Allgaier experienced a difficult outing at Kentucky in July, he’s posted two top-five finishes and four top-10 results in eight starts.

“Bubba” can turn his September around this weekend at Kentucky. In the last three races, Wallace has struggled with an average finish of 16.3 — which will not serve him we'll against the Joe Gibbs Racing Toyotas or the JR Motorsports Chevys supported by Hendrick Motorsports. But Wallace, 22, has always been consistent at Kentucky Speedway. He has averaged an 11th-place qualifying effort in three NXS starts at the intermediate track but has gained positions throughout each race. The driver of the No. 6 Roush Fenway Racing Ford has never finished worse than ninth at Kentucky. His career-high finish of fifth at the track came in July.

It’s hard to believe that Brendan Gaughan is running just his fifth full season on the NXS tour. However, with an average finish of 10.9, 2016 has been Gaughan’s most consistent. The driver of No. 62 Richard Childress Racing Chevrolet has a career-high four top-five finishes this season and has been running at the finish of all 26 races this season. While he has yet to win this year, the 41-year-old Las Vegas native won this race two years ago and has a remarkable average finish of 5.8 in eight Kentucky starts.

Affectionately known as the “Bull” for his tenacious on-track demeanor,  Poole has actually seemed to settle down in his first full season in the Xfinity Series — and that has worked to his advantage. In 17 starts last year, Poole, 25, posted just two top-10 finishes. In 2016, the Chip Ganassi rookie has two podium finishes, four top fives and 14 top 10s. Poole has three starts at Kentucky but earned a career-best ninth at the track in July.

Sieg is the top of the two independent teams to qualify for the Chase. The 29-year-old from Tucker, Georgia battled his way into the playoffs with a season-best third-place run at Daytona in July along with a top-10 finish at Texas. In five starts at Kentucky, Sieg earned a career-high 12th in this race last year. His average finish is 18.6.

In his third season in the Xfinity Series, Reed has improved his average qualifying effort by two positions and has earned three additional top-10 finishes compared with 2015. But the 23-year-old driver of the No. 16 Roush Fenway Racing Ford has not shown the speed to compete with his teammate Bubba Wallace —or the other NXS frontrunners on a weekly basis. His average result of 19.2 at Kentucky is no different. Reed has yet to post a top 10 on the 1.5-mile track — or the next two Chase venues Dover and Charlotte.

Earlier this week, Richard Childress Racing announced Jones has re-signed for next season. At 19, Jones is the baby of the Chase qualifiers. In his first full Xfinity season, Jones has scored 11 top 10s. Although he’s still looking for his first top five in 2016, his average finish of 12.9 is the eighth best on the tour. Jones’ sole career top-five Xfinity result came in his Kentucky debut. He finished 11th at Sparta in July.

Koch collected the final Chase spot with a 15th-place finish at Chicagoland — his15th top-15 finish of the season. Koch’s best result in 2016 was eighth — twice. But Kentucky Speedway has not been kind to the driver of the  No. 11 Kaulig Racing Chevrolet. In starts, his best finish was 11th in July but his overall average is 28.4 — the worst among the Chasers.

Brandon Jones will be back with RCR in 2017