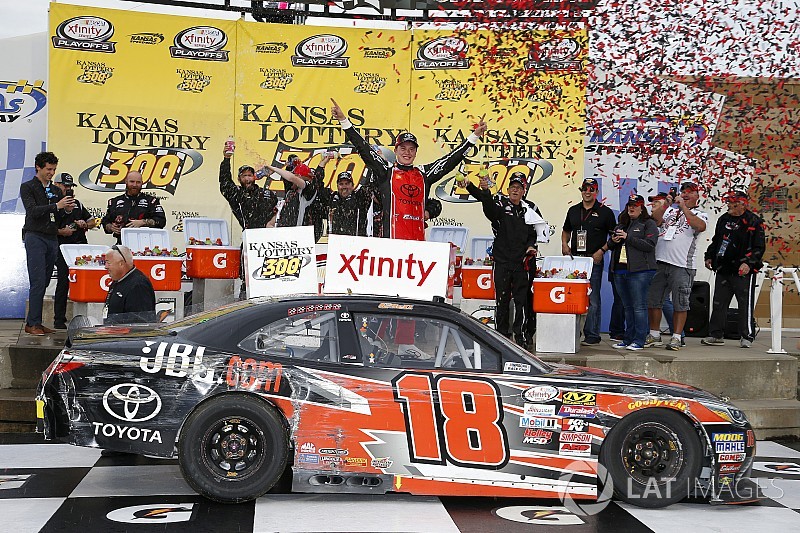 Christopher Bell won the lottery on Saturday — the Kansas Lottery 300.

“Hell yeah, thank you guys,” Bell yelled as he took his first checkered flag with a 2670-second lead over polesitter Tyler Reddick.

"I don't want to wreck anyone especially my teammate," said Bell of the contact with Jones. "My spotter said clear. I drove it in deep and thought I cleared him ... I don't know man, I was clear."

Erik Jones dominated the race at Kansas Speedway. He won both stages and led a record-high 186 of 200 laps for Kansas Speedway. But as Bell made the pass for the lead, Jones ran into the back of the No. 18 Toyota with four laps remaining in the race.

"Well I mean it's not dirt racing," said a frustrated Jones, who finished 15th. "He's not clear. I cant just stop on the top. I didn't expect him to drive in on the bottom so far he wouldn't hold his lane. Wasn't much of a race, more of a wreck."

Dillon, who pitted under the second caution on Lap 78, held the point for one lap under green before Jones blew by Bell and then Dillon for the lead. Custer, who elected to take two tires on the stop between stages, lined up fourth followed by Allgaier, Reddick, Byron, Blaney, Hemrick, Austin Dillon, Gaughan, Koch, Brandon Jones, Tifft, Reed, Poole, Annett and JJ Yeley. Sadler restarted 20th.

“We’ll get it back, drive smart,” crew chief Danny Stockman Jr., told Hemric prior to the Lap 145 restart.

Jones and Bell battled for the lead when the race returned to green but the No. 20 Toyota held the point. Blaney passed Bell for second on Lap 147. Allgaier ran fourth followed by Reddick, Byron, Custer, Ty Dillon, Poole and Austin Dillon. Reddick and Allgaier exchanged spots on Lap 149, but Allgaier regained the position over the next circuit.

Jones raced to a .838-second over Blaney lead with 50 laps to go. Bell hung onto third followed by Reddick, Allgaier, Byron, Custer, Ty and Austin Dillon and Reed. Sadler moved up to 12th.

Blaney dropped to 1.548-seconds behind Jones with 40 laps to decide the contest. Bell remained third followed by Reddick, Allgaier, Byron, Custer, Ty and Austin Dillon and Sadler. Reed, Poole, Tifft, Gaughan and Brandon Jones rounded out the top 15, while Reddick ran 20th, one lap down.

Blake Koch wrecked in Turn 2 on Lap 165 but he was able to make it to pit road before NASCAR needed to call a caution. Jones’ lead was over two-seconds with 30 laps to go.

With five laps remaining, Bell closed the gap between his Toyota teammate to .284-seconds. Jones hit the wall coming out of Turn 4 and Bell took the lead with three to go.

“It’s my first Xfinity win, I’m sorry that Erik couldn’t finish the race, but I’m just stoked," Bell added. "This thing was just awesome – this JBL Toyota Camry was absolutely outstanding and I’m really thankful to be a part of this Joe Gibbs Racing foundation.

"It’s a dream to be here and to be able to win in the Xfinity Series. It’s something that I dreamed of as a kid and I’m just really excited about that.”

Allgaier took over the points lead with a two-point advantage over Byron.

Erik Jones held a 1.107-second lead over Blaney after locking down his second stage win.

After spinning out with 15 laps remaining in the stage, Elliott Sadler recovered to finish 11th. The No. 1 JR Motorsports team decided to work on extensive repairs between stages. Sadler promised to “race like hell” to return to the front.

Ty Dillon had a commitment line violation and dropped from 16th to 20th — the last car on the lead lap when the race returned to green on Lap 51. Reddick passed Jones for the lead. Blaney settled into third followed by Bell, Austin Dillon, Poole, Allgaier, Hemric and Custer.

Jones regained the lead coming to the line on Lap 55. After one lap at the point, Jones extended his advantage over Reddick by .452-seconds. Blaney passed Reddick two laps later. Bell remained four followed by Dillon. Sixth-place Sadler led the playoff drivers followed by Allgaier, Poole, Hemric, Custer and Tifft.

Spencer Gallagher was forced to pit on Lap 63 with a loose right-rear tire. He dropped to 27th, two laps down.

Jones extended his advantage to 2.554-seconds over Blaney on Lap 75. Coming through Turn 4 on the next lap, Sadler, who was running seventh, spun sideways to ignite the second caution. Austin Dillon checked up and missed the No. 1 Chevy.

Jones continued at the point followed by Blaney, Reddick, Bell, Allgaier, Dillon, Byron, Hemric and Custer. Custer and the Dillons pitted Sadler dropped to 20th and begged the crew not to let him lose a lap. Sadler received a penalty for driving through too many pit boxes, but was already starting from the rear of the lead lap cars.

The race returned to green on Lap 82. Jones, Blaney, Bell, Reddick and Allgaier ran in the top five. Blaney passed Jones for the point on Lap 83. Allgaier moved up to third followed by Bell, Reddick, Byron, Hemric, Poole, Reed and Custer.

Jones moved by Blaney on the outside for the lead on Lap 85. Allgaier remained third followed by Bell, Reddick, Byron, Poole, Custer, Austin Dillon and Hemric. Sadler moved back into the top 15.

Erik Jones dominated the first stage by leading 45 laps and beating Ryan Blaney to the line by 3.983-seconds.

Polesitter Reddick led the field to green but Erik Jones quickly took command of the race.

Playoff contenders William Byron and Matt Tifft, who qualified sixth and eighth, respectively had to drop to the rear of the field for unapproved adjustments along with Spencer Boyd.

Tifft and Byron carved their way through the field in the early laps. Although Byron hit the Turn 4 wall on Lap 8 and sustained damage to the No. 9 Chevy. He soldiered on and by Lap 15 was running 19th. Tifft broke into the top 15.

With 10 to go, Jones continued at the point followed by Blaney, Reddick, Bell, Austin Dillon, Sadler, Poole, Allgaier, Hemric and Custer. Byron passed Tifft for 14th on the next lap. Dillon passed Bell for fourth with seven laps remaining in the stage. Byron passed Ty Dillon and Gallagher on Lap 41 for 12th. Tifft fell to 16th.

Australian GP not giving up on rescheduling F1 race