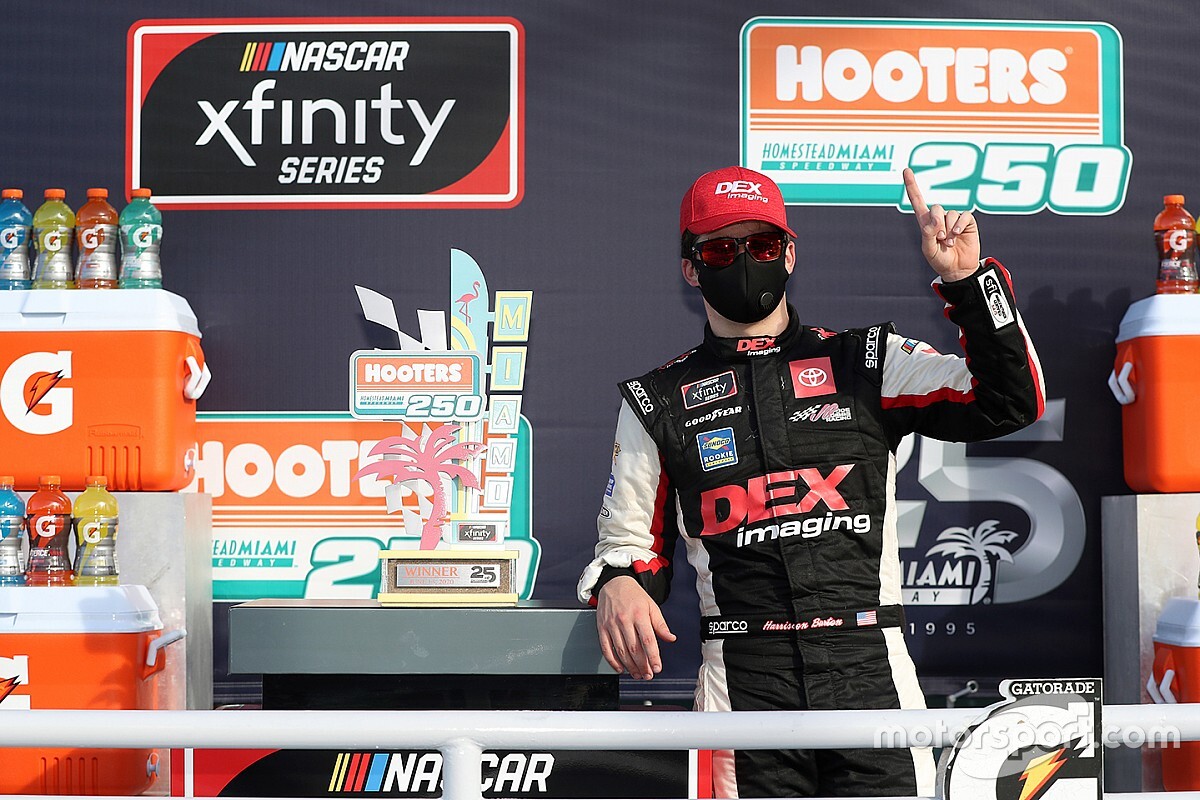 Harrison Burton won a pulsating Hooters 250 at Homestead-Miami Speedway, as Dale Earnhardt Jr starred on his NASCAR racing return in the Xfinity Series but fell short in a breathless final restart having been on course to finish second.

That late-race restart catapulted Burton into the lead battle, and he seized his chance in style to beat Austin Cindric, as longtime race leader Noah Gragson fell short.

Burton said: “What a day, if people keep on doubting us, we’re gonna keep coming back. What a race, this place is so much fun. I’m ready to go again tomorrow, and get two!”

Earnhardt showed zero signs of rust from his layoff, rising from 12th at the start to seventh by the competition caution on Lap 20, and by Lap 56 was inside the top three and battling hard for the win from there. A fantastic post-Stage 2 pitstop from Earnhardt’s crew gained him three places and handed him the lead for the restart. “My pit crew is on it today,” said Junior during the stage break. “It’s uncomfortable inside this car, but it’s pretty fun.”

Gragson, who won stage two, made a huge error when he overshot his pit box, so he restarted the final stage behind Earnhardt, Ross Chastain and Austin Cindric. Chastain hit the front, ahead of Cindric, Brandon Jones and Earnhardt, who made a poor restart and got shuffled back as the intensity ramped up.

Local hero Chastain and Cindric battled hard for the lead, with Cindric hitting the front on Lap 93, but Chastain refused to give in. Earnhardt moved back to third as they dueled ahead, and made one bold move at Turn 1 which Cindric repelled. The lead swapped back and forth between Chastain and Cindric.

Cindric hit the front on Lap 99, with Earnhardt moving past Chastain a lap later. Gragson moved up to third, as Chastain tumbled, despite hitting the wall at Turn 1. He then demoted team boss Earnhardt and set about Cindric on the first real long run of the day. Gragson took the lead with 60 laps remaining.

Cindric was the first of the leaders to pit, with 46 to go, which triggered everyone else on the lead lap. Gragson suffered a huge lockup approaching pit road, almost missing the entry, while Chastain’s crew allowed a wheel to roll across pit lane, resulting in a penalty.

Gragson resumed with a 5s lead over Cindric, with Earnhardt chasing him hard in third. Dale Jr passed Cindric with 33 laps to go, with only teammate Gragson between him and victory.

Gragson grazed the Turn 1 wall again as Junior halved the gap. But Gragson responded to his challenge, his car possessing excellent long-run speed and he pulled out a big advantage again in the closing stages – despite a third brush against the Turn 1 wall.

A yellow flew with seven laps to go, as stage one winner Ryan Sieg spun at Turn 1. That setup a frantic finish, as Gragson lost his 9s lead and Burton beat Earnhardt out of the pits for second place, with Brandon Jones losing fourth with a penalty for too fast entering pit road.

Earnhardt gave Gragson a huge push at the restart but Burton grabbed the lead at Turn 1 with a big lunge, only for Cindric to then hit the front. They took the white flag three wide, with Burton leading on the back stretch after a great move into Turn 1, winning the race from Cindric and Gragson. Anthony Alfredo came from nowhere to finish fourth, ahead of Earnhardt and Michael Annett.

A star of the race was Chase Briscoe, who suffered an issue before the start when he lost ballast on the parade lap, and lost six laps having it replaced. He battled hard all day, including passing all the leaders twice to get his laps back. He got on to the lead lap as the leaders made their final stops – actually running third briefly – but he didn’t get the caution he was shooting for. He finished seventh after a brilliant effort.

Gragson started stage two from the front, as his first pit stall proved a huge bonus, ahead of Chastain, Cindric and Earnhardt – as Timmy Hill lost a wheel in pit lane and opening stage winner Ryan Sieg lost his track position due to adding a packer to his suspension. After his early problems, Briscoe was four laps down at this point.

Gragson grabbed the lead off Turn 2, but Chastain made a power move into 3, which allowed Cindric in front of both of them. Sieg and Earnhardt battled hard for fourth, with Dale Jr winning that duel.

Gragson fell back into team boss’s Earnhardt’s clutches, Dale Jr moving into third on Lap 56. He quickly chased down Chastain, swooping inside him at Turn 1 to take second just before the race’s third caution flew as Vinnie Miller and Brett Moffitt got together entering Turn 3 on Lap 59 and both spun into the wall.

At the restart, Chastain held sway but had Cindric racing him hard. Earnhardt won a battle with Gragson for third, and made it a lead trio out front.

Gragson then pulled an amazing fourth to first move using the low line at Turn 1 with 10 laps to go. That power move proved decisive for Gragson to win the stage, while Cindric jumped the battling Chastain and Earnhardt for second with three laps to go. Jones finished fifth, ahead of Haley.

Briscoe passed all of the leaders, gaining another lap back to start the final stage two laps down. 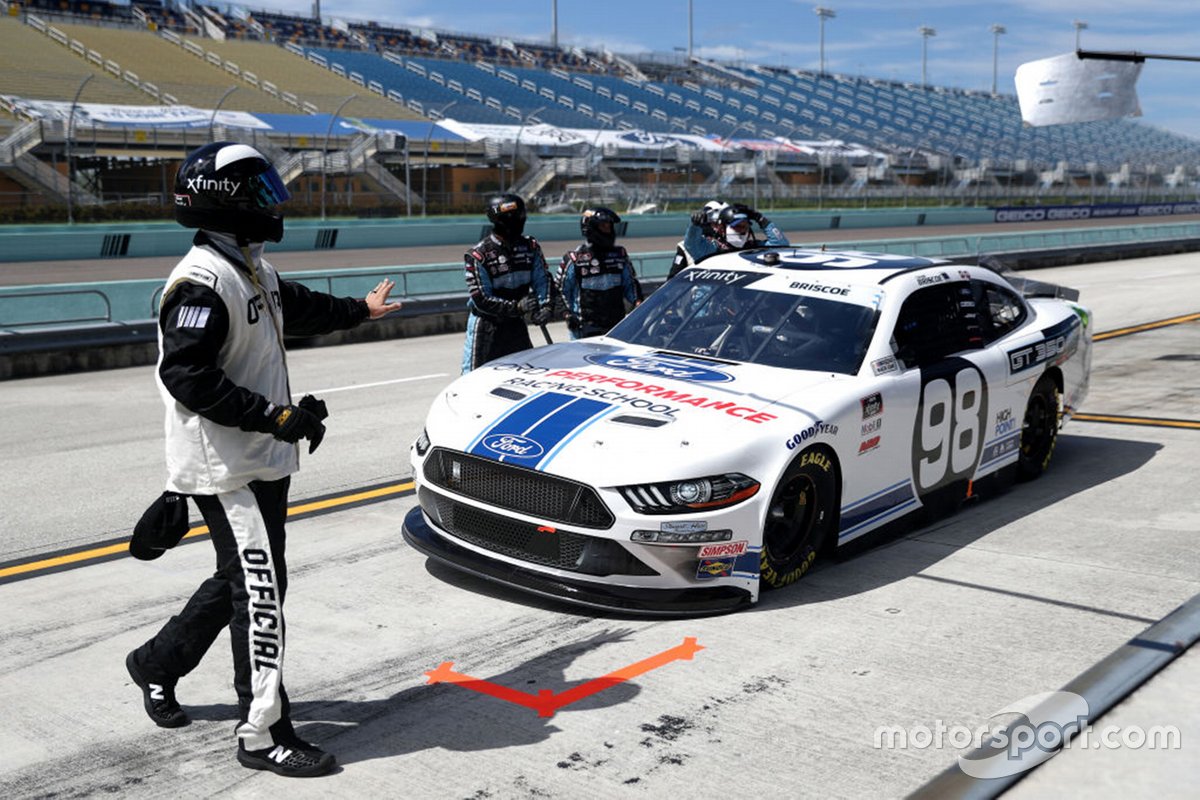 There was drama before the start as Briscoe’s Ford dropped multiple ballast bars on to the track, as the right-side lead rail and spacers came adrift. He rejoined the race after the green flag, dropping six laps but quickly gaining one back by Lap 12 by passing all the leaders.

Gragson burst into the lead on the opening lap from the outside of the front row, with Chastain surging to second ahead of pole sitter Harrison Burton. Earnhardt Jr gained spots to run in inside the top 10 by lap three, chasing teammate Justin Allgaier initially but then passing him and Sieg to run seventh by Lap 15.

Cindric moved up to third before the competition caution on Lap 20, with none of the leaders taking the opportunity to pit – apart from Sieg.

At the restart, Chastain grabbed the lead ahead of Cindric and Gragson. Junior gained a spot to run sixth, then passed Jones for fifth.

But Sieg’s new tires gave him a huge advantage, and he surged through to the lead and won the stage – as Briscoe took the opportunity to get another lap back. Chastain ran second, ahead of the battling Gragson and Cindric.

The second caution was for a smoker at at Turn 1, Kody Vanderwal, with four laps to go until the end of the stage. The stage ended under caution in the order Sieg, Chastain, Gragson and Cindric. Earnhardt finished stage one in seventh.

Dale Earnhardt Jr: Miami NASCAR race “might be the last one”