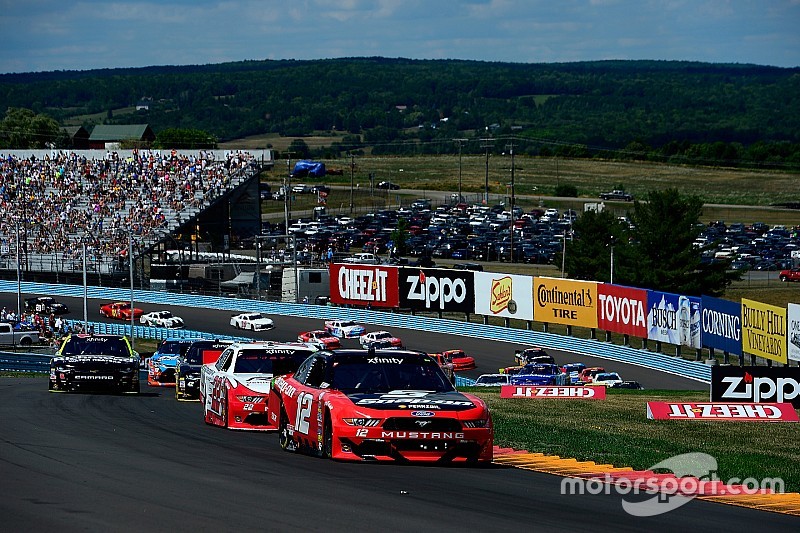 Joey Logano started on the pole and led 66 of the 82 laps on his way to a win in Saturday’s Zippo 200 at Watkins Glen International, repeating his victory in this race one year ago.

It appeared the win would come down to a late-race battle between Logano and Penske teammate Brad Keselowski, but Keselowski was forced to pit with under 10 laps remaining while running second due to a broken track bar.

“I had to drive really, really hard. Brad was I think faster than me. I remember last year racing here and whoever was behind was faster, just because of the draft,” Logano said.

“I had a lot of fun racing with Brad. What an awesome win for Team Penske, getting the Xfinity car in Victory Lane. This has been a long time coming for the Xfinity here.”

The win was Logano’s third consecutive at the Glen, his first of the season and 26th of his career.

“It’s so hard to drive away from people in these Xfinity cars,” he said. “As soon as you get any bit of a draft, they drive right back up to you.”

Menard moved into second when Keselowski ran into problems but couldn’t make up the ground to make a pass for the lead.

“The last run of the race was our best run. I think we ran our fastest lap with about two laps to go in the race,” he said. “The car had really good long-run speed, it just didn’t take off that good.

“The leaders would gap us and we would maintain or close the gap slightly. I’m proud of (crew chief) Justin Alexander – it was his first race with our Xfinity team. We had good pit stops and good strategy.”

On a restart with 65 remaining, Ryan Sieg, Menard and Todd Bodine stacked up at the top of the essess which triggered a multi-car wreck that eventually collected nine cars.

“All I see is we have bad luck and it is getting old, my friend. It is unfortunate for my team,” Wallace said. “We come here and I messed up on the first lap in the first practice we had and then we were sitting pretty for the rest of the weekend.

“It is just getting old. We will go on to Mid-Ohio and try to have some luck there. It is just a bummer, we hate it.”

The race was red-flagged for nearly 15 minutes to clean the track of debris from the incident.

With 23 laps remaining, Derrike Cope slowed on the track and was coasting through the bus stop when it appeared something exploded under the hood of his No. 70 Chevrolet. He was not injured.

A NASCAR spokesman confirmed the sanctioning body was impounding the car and would examine it back at its research and development center in Concord, N.C.

Kelly returns to Joe Gibbs Racing for Mid-Ohio Xfinity round