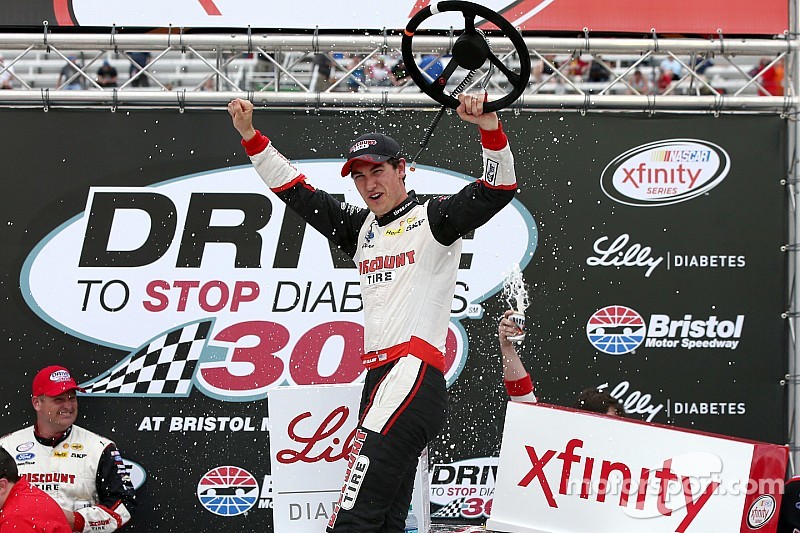 Leading every lap in the 300 lap event, Joey Logano classed the field beating rookie Daniel Suarez and Chris Buescher to the line.

Joey Logano put on as dominant a performance as possible Saturday in the Drive to Stop Diabetes 300 NASCAR Xfinity Series race at Bristol (Ten.) Motor Speedway, leading all 300 laps of the 300-lap race on his way to the win.

"Such a dominating car; it's fun to drive it," Logano said. "The whole time, you're just nervous for something to happen."

Joe Gibbs Racing teammates Suarez and Jones battled for the second position behind Logano on a restart following a lap 206 caution and red flag that came out for repair to the track SAFER barrier after it was damaged by J.J. Yeley's car.

Suarez took over second, but Jones got another chance at his teammate and the second position when the yellow flag waved for the eighth and final time with 20 laps to go.

"That's the most important thing -- to not give  up and to keep fighting," Suarez said. "I'm very happy."

On the final restart, Suarez maintained his second spot and Jones lost an additional spot to Buescher.

"Once we got going, we were really fast," Buescher said.

Kevin Harvick ran second to Logano for a significant chunk of the race after taking second before a debris caution on lap 58. Harvick restarted third after the yellow flag but quickly got up to second and battled Logano for the lead.

No dice for Harvick

Harvick's bid for a top spot diminished, though, with a pit road speeding penalty during a lap 173 caution. Unable to pass, Harvick remained at the back of the top-10 throughout the final stages of the race, only able to make his way up to seventh by the finish.

"I thought the 88, Harvick, was really fast, maybe faster than me," Logano said.

Austin Dillon and Denny Hamlin also ran near the front early in the race, but Hamlin wound up heading to the garage with a rear gear issue, leading a trail of fluid behind him. Dillon's day first went south with a pit road speeding penalty around lap 60 and then a couple of extra pit stops for tire issues. Xfinity Series regular Regan Smith also ended the day in the garage before the halfway point of the race after losing power.