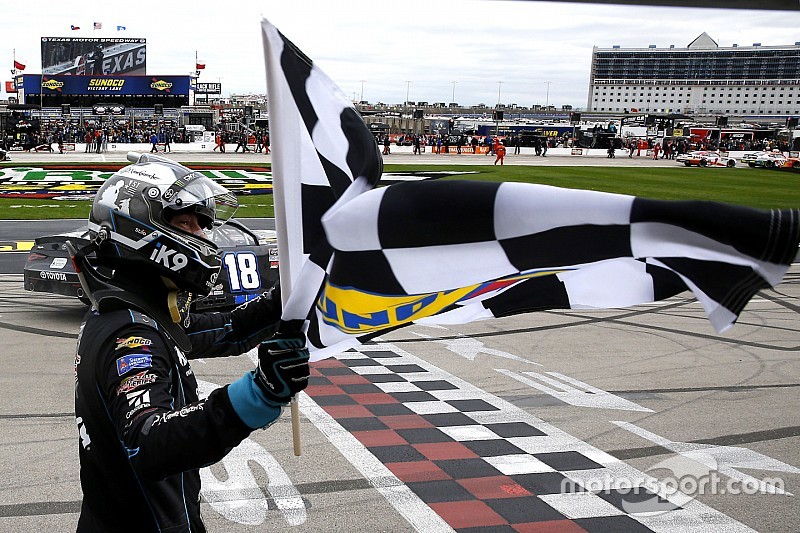 Kyle Busch is poised for yet another NASCAR triple-header weekend sweep.

Busch jumped to a big lead on a restart with nine of 200 laps remaining and held off Tyler Reddick to win Saturday’s Xfinity Series race at Texas Motor Speedway.

The win is Busch’s third in four series starts and the 95th of his career.

Should he win Sunday’s Cup race at Texas, it will be the third time in Busch’s career he has swept wins in all three NASCAR national series during a weekend.

"Not taking any tires (on the final pit stop) was certainly a help. I was worried about the restart because I didn't think there was going to be enough grip," Busch said. "The car certainly had enough grip in it.

"This Toyota Supra was awesome today. It was really fast on the long run I could just never get people away from me on the front side of the run to get settled into my rhythm and be able to go. Every time I got to the outside, people would just drive by me on the bottom. Then when I'd get to the inside, somebody would bust it on the outside on me and make me loose.

"We were just all over the place today. Certainly a fast race car once I could get rolling. Christopher Bell ran a great race, he should have won this thing today."

On Lap 125 while running sixth, Justin Allgaier spun into the frontstretch grass to bring out a caution.

“He didn’t give me any room and I was just so unstable,” Allgaier said over his radio. “Tell (Custer) he did a nice job clearing me.”

All of the lead-lap cars elected to pit with Reddick the first off pit road followed by Bell, Busch and Brandon Jones. The race returned to green on Lap 132.

Brandon Jones and Cole Custer wrecked on Lap 133 off Turn 2 to bring another caution. “Lost it  under him,” Custer said on his radio.

Several cars elected to pit under the caution but Reddick remained on the track and in the lead when the race restarted with 61 laps to go.

Bell quickly got around Reddick and moved into the lead on the restart.

With 45 laps to go, Bell held a small advantage over Reddick with Burton not far behind in third.

With 25 laps remaining in the race, Bell maintained about a 1-second lead over Reddick with Busch running in third.

A caution was displayed on Lap 190 when Jeremy Clements ran out of fuel and came to a stop in the middle of pit road. Busch was the first off pit road and led the way with the restart with six laps to go, followed by Reddick, Bell, Kaz Grala and Briscoe.

Ryan Sieg elected not to pit and held off Chastain in a 3-lap shootout to take the Stage 2 win.

Reddick was third, Busch was fourth and Bell completed the top-five.

Following the break between Stages 1 and 2, Busch was the first off pit road while Bell was penalized for speeding on pit road during his stop. Jones was also penalized for removing equipment from his pit box. Both had to restart the race from the rear of the field.

The race returned to green on Lap 54 with Busch in the lead followed by Reddick and Keselowski.

On Lap 58, Tyler Hill and David Star made contact and spun off Turn 4 to bring out a caution. The race returned to green on Lap 64 with Busch in the lead followed by Custer.

Brad Keselowski, running 11th at the time, spun off Turn 2 on Lap 65 after contact with Justin Haley. “I got ran over by three different cars,” Keselowski said. “Just part of it, we all got bottled up on restarts and a couple guys that don't know what they're doing ran us over.”

The race returned to green on Lap 71 with Busch leading the way followed by Noah Gragson, Custer and Allgaier.

Gragson powered around Busch on the restart to take the lead for the first time in the race.

With 10 laps to go in the stage, Ryan Black Jr. hit the wall off Turn 2 to bring out a caution. All of the lead-lap cars elected to pit with Busch the first off pit road followed by Gragson and Reddick.

Sieg remained on the track and led the way on the restart with three laps remaining in the stage.

Bell led every lap on his way to the Stage 1 victory over Busch – his fourth stage victory of the season.

Allgaier was third, Custer fourth and Jones completed the top-five.

Bell started on the pole but before the race was a lap old, Clements got loose and went spinning through the frontstretch grass to bring out a caution. The race returned to green on Lap 6.

With 30 laps remaining in Stage 1, Bell maintained a small advantage over Allgaier, followed by Busch, Jones and Austin Cindric.

Bell moved out to a more than one-second lead over Allgaier with 15 laps to go in the stage followed by Busch, Jones and Cindric.

With six laps to go, Busch moved into the runner-up position behind Bell as Allgaier dropped to third and Custer moved into fourth.

Gray Gaulding, Timmy Hill, Josh Williams, Jeff Green and Ronnie Bassett Jr. all had to start the race from the rear of the field for missing the drivers meeting. Garrett Smithley and Tommy Joe Martins both had to start from the rear for unapproved adjustments.

Another Top-10 at Texas is "huge accomplishment" for Ryan Sieg