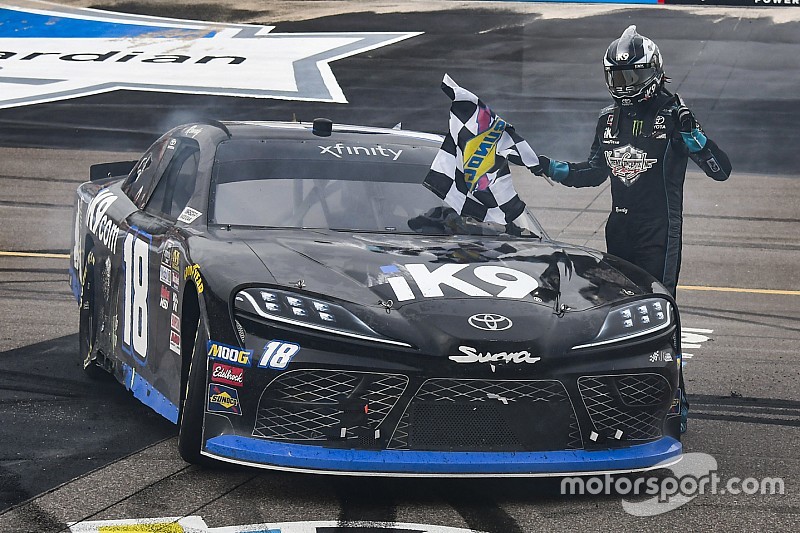 He faced a stiff challenge, but Kyle Busch continued his domination at Phoenix in the NASCAR Xfinity Series.

Christopher Bell gave Busch a run for his money in Saturday’s race at ISM Raceway but ended up wrecking out, leaving Busch to run away with the victory, his 11th series win in 23 career starts at the 1-mile track.

Busch, who took the checkered flag more than three seconds ahead of Ryan Truex, has won more at Phoenix than any other track in the series.

"Christopher was certainly going to give me a run for my money today," Busch said in Victory Lane. "I can't say enough about our guys at Joe Gibbs Racing. They built really fast Supras.

"Christopher, I hated he got caught up in that mess. Obviously, it was going to be a very fun run to the end there.

On Lap 131 of 200, Stephen Leicht’s No. 01 Chevrolet appeared to blow his engine with a giant plume of smoke that covered the track. In the smoke in Turn 3, Christopher Bell and Justin Allgaier both spun in the oil and wrecked, which effectively ended Bell’s day.

“Saw him (Leicht) blowing up going into (Turn) 1 and figured it was going to be slick, I saw (Allgaier) start sliding, then I started sliding and as soon as I entered the smoke ball I lost my bearings,” Bell said. “Next thing I know, I smacked the wall.”

All of the lead-lap cars elected to pit under the caution with Busch the first off pit road followed by Reddick, Truex, Custer and Cindric. The race returned to green on Lap 143.

With 55 laps remaining in the race, Truex had moved up to the runner-up position and seemed to be making up ground on Busch. Reddick ran in third.

Busch built his lead back up to nearly 1.7 seconds over Truex with 40 laps to go. Reddick remained third and Cindric fourth.

"I guess it's good when you lose to Kyle Busch. I Just got us too far behind early on, we were too free," Truex said. "We worked hard all day to get it back. Our car was just so good on the long runs."

Bell managed to fend off a stiff challenge from Busch to claim the Stage 2 win.

Reddick was third, Allgaier fourth and Gragson completed the top-five.

Following the break between Stages 1 and 2, Cindric elected to pit which handed the lead back over to Bell on the restart on Lap 54.

Busch quickly grabbed the lead away from Bell on the restart as Reddick moved into third.

Two laps later, Bell and Busch traded the lead before Busch was able to put some room between himself and Bell.

With 20 laps remaining in the stage, Bell got around Busch to reassume the lead. They were followed by Reddick and Allgaier.

Bell maintained a small advantage over Busch with 10 laps to go in the stage.

Cindric held off a fast-approaching Bell on new tires to earn the first playoff point of the 2019 season.

Bell, who started on the pole, took command of the race early and moved out to a 1-second lead over Busch after the first 12 laps.

With 25 laps remaining in the 45-lap stage, Bell had built up a more than 1.2-second lead over Busch. They were followed by Reddick, Custer and Cindric.

Bell expanded his lead over Busch to 2.3-seconds with 15 laps to go in the stage.

On Lap 33, Bayley Currey hit the wall to bring out the first caution of the race. Most of the lead-lap cars elected to pit with Bell the first to come off pit road.

Cindric was one of eight drivers to stay out and inherited the race lead when the race returned to green with six laps left in the stage. He was followed by Annett and Haley.

With two laps to go, Bell had made his way back up to second on fresh tires.

Ronnie Bassett Jr. had to start the race from the rear of the field after moving to a backup car on Friday.

Austin Cindric sees "a great opportunity" for a win at Phoenix