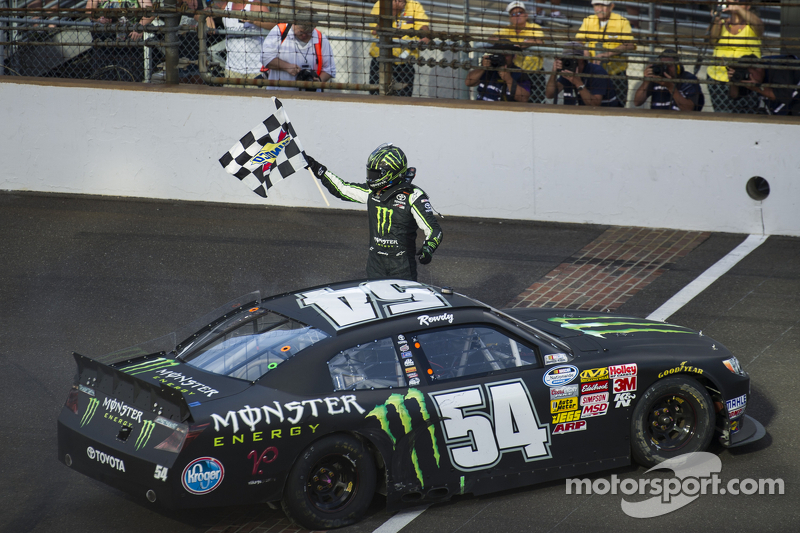 There was no doubt that Kyle Busch wanted the win at the Brickyard in Indiana as he demolished his rivals in the NASCAR Nationwide Series race and was the one kissing the famous yard of bricks.

Except for a late race loss of the lead, Busch was untouchable and after being passed momentarily, he quickly regrouped and regained the lead, scoring his 59th series victory and his eighth win in 2013.

Said the victor, “It sure got interesting at the end. We learned some things during our test, which helped us during the race. We sat on the pole and set a track record. And then we had a pretty dominant car until the end. I don’t whether I got loose or Joey (Logano) ran into m, and we were lucky to not crash. When Brian Scott got by me, I had to go to work. It was tough, as the air here is so tough. When you take off my air, I am going to take off yours. Fortunately, the right car was in victory lane today.”

Regarding the win at Indianapolis, Busch stated, “The history and prestige around this place. Whether it is Nationwide, Sprint Cup, MotoGP or Grand-Am, a victory here is really, really cool. The Yard of Bricks is really cool.”

Crew chief Adam Stevens said one reason the team lucked out is that the weather during the test was identical to today – cool and breezy.

Brian Scott, who had passed Busch during a late-race restart, ended up with second place while driving the Shore Lodge Chevrolet. He led laps 95-97. For Scott, second was a career-best for him.

“Our strong run started in practice, as we were strong coming off the truck,” Scott said. “On that last restart, we got a good run when Joey Logano and Busch got together and I was able to get a good run for the lead. I was then praying to open up as big a gap as I could to get a good cushion. But he had a fast car, as I slowed too much and he got up to my bumper. It was fun to be leading at Indianapolis at the end, and I would give anything to have a re-wind and do it all over again. “

Said Logano, “We picked our way through the field at the beginning and through pit strategy, we were able to catch the leader. I knew then it was going to be ‘Kyle and Joey here we come.’ My first two restarts I got beat and with the third one, I thought I knew what I had to do. The third one was to be my charm, but it didn’t work. I thought my car was good enough but I learned he was just screwing with me. But we did give it our best shot.”

Hornish dropped out with overheating problems and finished 34th.

Kligerman: Parker from the block will makde his first start at IMS