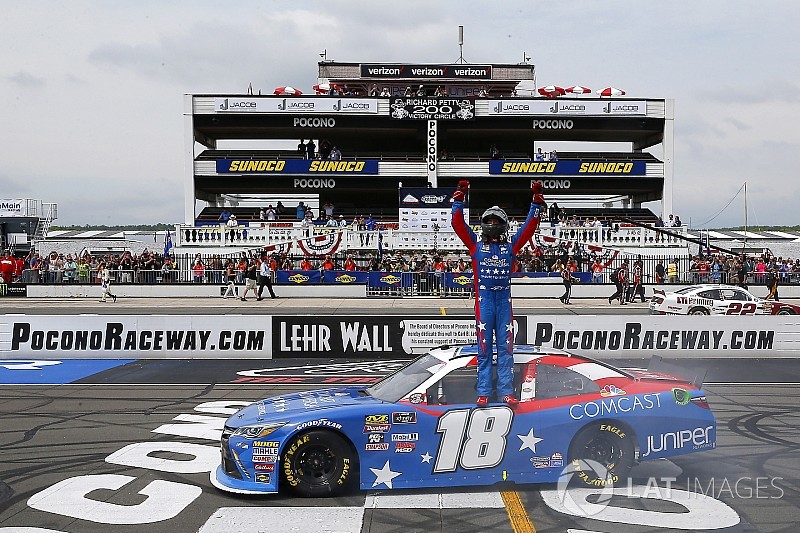 Busch, who got sent to the rear of the field at the end of Stage 1 because of a speeding penalty, rallied to win Saturday’s Pocono Green 250, picking up his first series win at Pocono Raceway.

The win was Busch’s first of the 2018 season in his fourth start and 92nd of his career.

However, Busch's car later failed post-race inspection after failing the heights. That will likely result in an L1 penalty, but he will keep the victory.

“As good as our car was, I tried to screw it up early again this week,” Busch said in Victory Lane. “My guys are amazing at Joe Gibbs Racing. Everybody at the Xfinity shop – you guys are amazing.

“The car was on rails this week. It was last week, too, but we were able to overcome our deficit we had this weekend and get back to the front. Winning here at Pocono feels really, really good.”

Asked about his battle back through the field after his pit road speeding penalty, Busch said, “You are always kind of worried of something crazy or unpredictable happening. We just had to bide our time and be patient for a little bit.”

The race was the first at Pocono to use a new aero package that features front air ducts, restrictor-plates, larger rear spoilers and splitters from the 2014 season.

Busch finally made his way back into the lead with 40 of 100 laps left in the race, just before a caution involving Christopher Bell and Justin Allgaier.

“There was nothing I could have done there with Justin. We were just victims of Pocono restarts,” Bell said. “It just got really hairy. It was exciting. That’s why sometimes we love it and sometimes we hate it.”

With 30 laps left, Busch held more than a second lead over Custer.

With 13 laps to go, Hemric got around Custer and moved into the runner-up position behind Busch. Elliott got around Hemric the second spot with a lap to go.

With the help of a push from his teammate Cindric, Paul Menard passed Custer in Turn 3 on the last lap to take the Stage 2 victory.

Following the break between Stages 1 and 2, most of lead-lap cars elected to pit but Custer – who pit at the end of Stage 1 – stayed out and took over the lead when Stage 2 went to green on Lap 30.

Busch and Bell were both penalized for speeding on pit road during the stops and Reed had a crew member over the wall too soon, so all three had to restart from the rear of the field.

“Things are going to get awfully ugly here in a second,” Busch said during the break after the penalty.

Allgaier moved into the runner-up position shortly after the restart.

With five laps left in Stage 2, Custer maintained a small lead followed by Allgaier and Menard. Busch had made his way up to sixth.

Several teams elected to pit near the end of the stage so as they could stay out at the start of the final stage. Among them were Jones, Hemric, Bell and Michael Annett.

Busch dominated the competition on his way to lopsided Stage 1 victory over Bell.

Custer, the pole-winner, took an early advantage in the race as Busch quickly moved into the runner-up position.

On Lap 3, Busch made his way around Custer for the lead as Jones moved into second.

With 10 to go in the first stage, Busch had built up a five-second lead over Bell, followed by Cindric, Custer and Sadler.

Custer elected to make a green-flag pit stop with two laps remaining in the stage, which should allow him to complete Stage 2 without having to stop again.

Alex Labbe had to start the race from the rear of the field for making unapproved adjustments after qualifying.

Cindric on early damage at Daytona: ‘Salvaged a great day out of it’