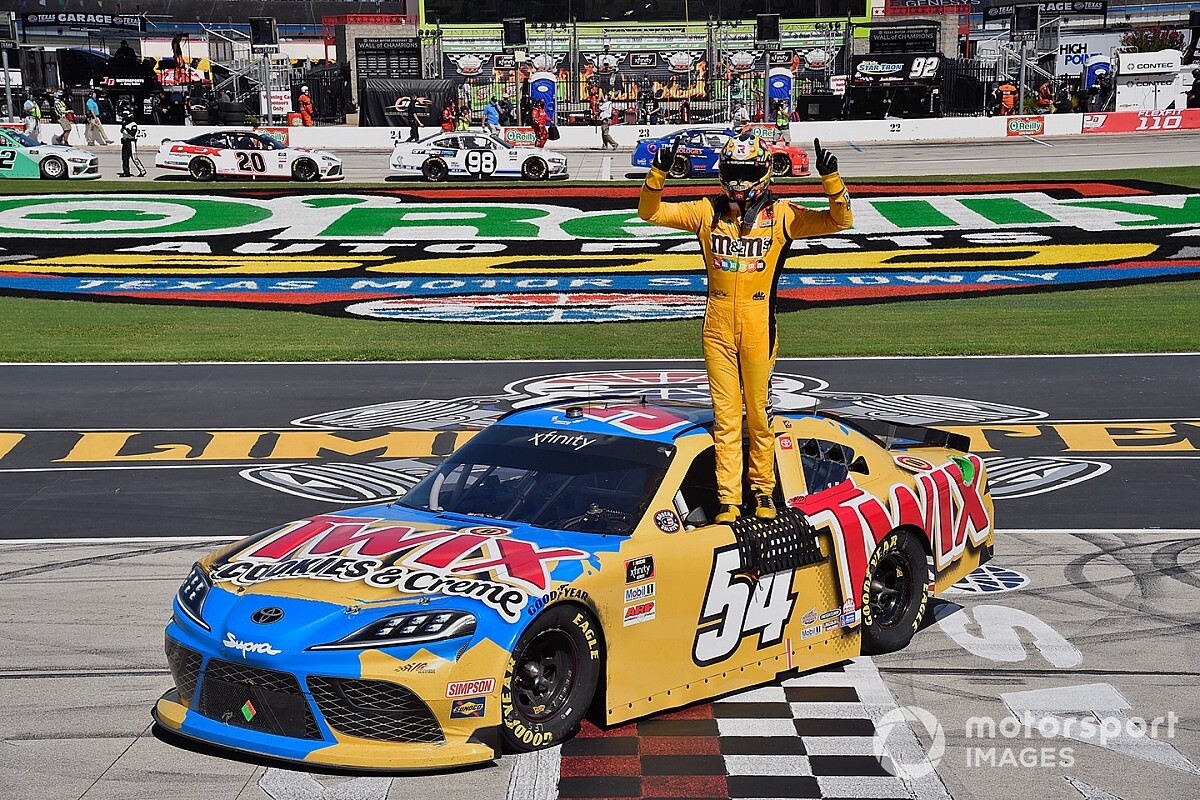 Kyle Busch racked up yet another victory in the NASCAR Xfinity Series at Texas but this one was anything but easy.

UPDATE: Kyle Busch failed post-race inspection and has been disqualified. Austin Cindric is the race winner.

Busch got a great restart in overtime and easily held off Austin Cindric to win Saturday’s race at Texas Motor Speedway, his 10th series win at the speedway and 98th career victory.

To get to the end, however, Busch had had to fight to the front of the field three different times – after starting 22nd, after a pit road speeding penalty at the start of Stage 2 and late in the race when his team elected to pit on a caution when many others stayed out.

Even at the end, Busch had to patiently wait to return to the lead while Chase Briscoe remained on the track and in the lead while using every bit of fuel before making his stop.

“It was a slick race track and these Xfinity cars they don’t have a whole lot of grip so you’re definitely battling it,” Busch said. “This car was pretty car.

“On the last run we were a little tight and I thought (Justin Allgaier) was going to have something for us but then they had a penalty. Then (Cindric) was charging on me and catching me a little and stalled out and that was it.

“We had a great restart there at the end and I was able to bring it home for my boys.”

Briscoe finished third, Allgaier – who won Stages 1 and 2 – was fourth and Harrison Burton rounded out the top-five.

With 85 of the scheduled 200 laps remaining in the race, Busch got around Allgaier off Turn 4 to take the lead for the first time in the race.

On Lap 118, Noah Gragson looped it off Turn 2 and pounded the wall a couple times to bring out a caution. Busch and several others elected to pit but Allgaier remained on the track.

On the restart on Lap 123, Allgaier was followed by Cindric and Justin Haley. Busch restarted 15th but with four fresh tires.

With less than 70 laps to go, Busch had moved back into the top-five while Allgaier continued to hold a small lead over Cindric.

On Lap 154, Cindric finally got back around Allgaier for the lead after running on his back bumper for several laps.

A round of green-flag pit stops began on Lap 158 with Cindric and Allgaier making their respective spots on Lap 160.

On Lap 168, NASCAR issued a penalty to Allgaier for a blend-line violation when he returned to the track following his pit stop, which had occurred eight laps earlier.

With 25 laps to go, three cars still had yet to pit – Harrison Burton, Briscoe and Ross Chastain – while Busch ran fourth, highest among the cars that had already pit.

With 15 laps remaining, Briscoe was the leader while Busch moved to second, but more than 27 seconds behind.

Caution was displayed on Lap 196 for Joe Graf Jr. tagging the wall. Several drivers elected to pit, including Briscoe, Brandon Jones and Allgaier, but Busch remained on the track.

When the race restarted in overtime, Busch was followed by Cindric and Briscoe.

Allgaier easily held off Cindric by more than 2 seconds to claim the Stage 2 win, his seventh stage victory of the year.

Jones was third, Gragson fourth and Busch rounded out the top-five.

Following the break between Stages 1 and 2, the lead-lap cars all pit with Kyle Busch the first off pit road but he was penalized by NASCAR for speeding during his stop. He had to start the race from the rear of the field.

On the restart on Lap 53, Cindric led the way.

Allgaier stayed side-by-side with Cindric in the lead as Harrison Burton moved to third and Allgaier finally completed the pass for the lead on Lap 55.

On Lap 68, NASCAR displayed a caution for debris in Turn 2. Most of the lead-lap cars remained on the track and Allgaier led the way on the restart on Lap 73.

Kody Vanderwal got turned around and hit the Turn 2 wall on Lap 75 to bring out another caution. Ross Chastain had hit the wall the lap before.

Allgaier led the way on the restart on Lap 79.

With 10 laps remaining in the first stage, Allgaier maintained a small lead over Cindric while Jones ran third and Gragson fourth.

With three laps left in the stage, Busch had rebounded from his speeding penalty to move back into the top-five.

Allgaier held off Jones for the Stage 1 win, his sixth stage victory of the 2020 season.

Busch grabbed third at the line over Cindric while Briscoe rounded out the top-five.

Michael Annett started on the pole thanks to a random draw, but Cindric went three-wide on the first lap to grab the lead.

Gragson got into Riley Herbst coming off Turn 4 on Lap 4 and turned Herbst into the wall to bring out the first caution. Herbst’s damage was extensive and he ended up retiring from the race.

“First time at this speedway and got absolutely drove through by (Gragson),” Herbst said afterwards. “Just a little bit of lack of respect. We came off two really strong runs at Kentucky and thought we could follow it up here at Texas with another strong run, and we get used up on Lap 5.”

The race returned to green on Lap 9 with Cindric in the lead.

On Lap 18, Matt Mills got into Myatt Snider off Turn 2, nearly tearing off Snider’s rear bumper cover. NASCAR decided to make this the competition caution (which was originally scheduled for Lap 20).

The lead-lap cars elected to remain on the track and Cindric continued to lead the way on the restart on Lap 23.

With 15 laps remaining in the first stage, Allgaier had moved into the second position and began closing on leader Cindric. Jones had dropped back to third.

On Lap 35, Allgaier got around Cindric off Turn 2 and moved into the lead for the first time in the race.

Snider was black-flagged with four laps remaining in the stage when his replacement rear bumper cover came off his No. 93 Chevrolet.

Bayley Currey had to start the race from the rear of the field because of multiple failures during pre-race inspection.

Harrison Burton was without regular crew chief Ben Beshore in the race. Beshore on Friday notified Joe Gibbs Racing that he had been around someone who tested positive for COVID-19 and elected to remain home out an abundance of caution. Engineer Dustin Zacharias served as Beshore’s replacement.