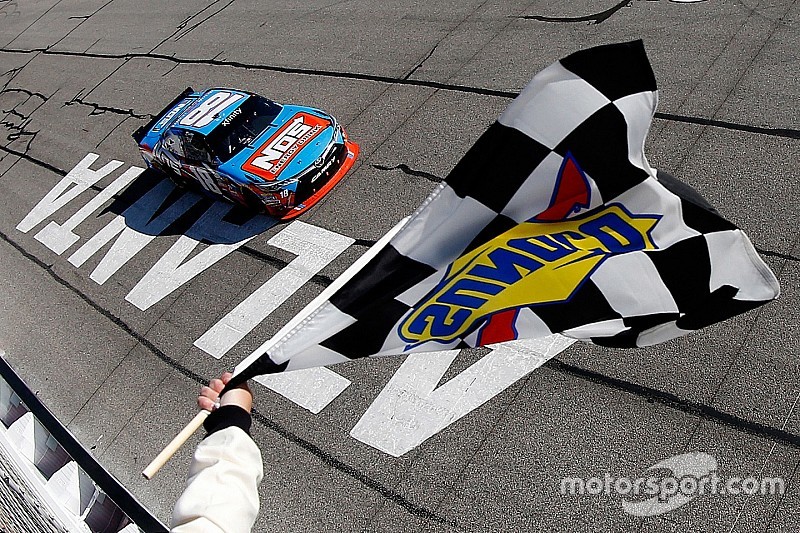 There isn’t much Kyle Busch hasn’t accomplished in the NASCAR Xfinity Series, but he was able to check another item off that very short list on Saturday.

The win is Busch’s 77th in the Xfinity Series in his first race of the 2016 season. He was previously 0-for-11 at Atlanta.

“It feels really good. To win here in Atlanta after so many tries, it’s really, really neat to finally get that,” Busch said in Victory Lane. “I’m really excited to be in Victory Lane with his guys – the car has been fast all weekend long.

“At the end there racing with Larson, I was just trying to bide my time. I was trying to save my tires but he was coming at a pretty good clip there at the end. I was just hoping I could hold him off.”

On the final restart with 29 of 163 laps remaining, Busch got a big jump on the rest of the field and built up a considerable lead. Larson was the only one able to make up ground him at the finish.

Busch’s teammate at Joe Gibbs Racing, Erik Jones, appeared to have a car capable of contending for the win but Jones was black-flagged for jumping the start of the race when he crossed the start/finish line before pole-winner Busch.

Busch sent an apology to Jones’ team over the radio for spinning his tires on the start, but it didn’t take long for Jones to make up the lost ground and he ended up in third.

“It just made the day longer. We had the car to do it but we burned the tires off it while we did it. It was still a good rebound from Daytona.”

“We just needed some long runs.”

After the race, Menard's car failed post-race inspection. The laser inspection system found the car's rear toe exceeded the maximum allowable amount. Any penalties will be announced next week by NASCAR.