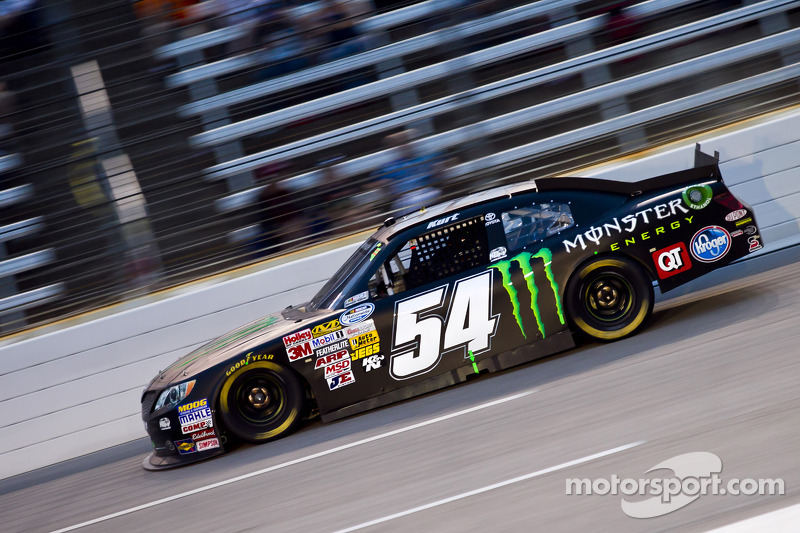 Kurt Busch and No. 54 Monster Energy Camry Salvage 8th with 'Lady in Black' 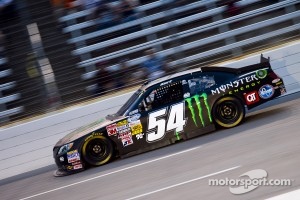 Kurt Busch, the 2004 NASCAR Sprint Cup Series Champion and recent winner with the Kyle Busch Motorsports (KBM) NASCAR Nationwide Series (NNS) team, made his third start behind the wheel of the No. 54 Monster Energy Camry this weekend at the famed Darlington (S.C.) Raceway. In his initial NNS event on the track labeled "too tough to tame," Busch accomplished the team's first top-five race start. Despite loose-handling car conditions and recovery from a blown right-front tire, the No. 54 team drove from the rear of the field and salvaged an eighth-place finish, the group's fourth top-ten finish of this year.

At race start, the first of six yellow-flag event caution periods waved for what would eventually feel like a fast night race. The No. 54 team started the S.C. event from the fourth position and by lap nine had gained one spot and settled in behind leaders Ricky Stenhouse Jr and Denny Hamlin. Busch's feedback at race start reflected the sentiment he would share all night, commenting on the car's loose-handling conditions.

On lap 37 of the originally scheduled 147-lap event, the team surrendered its third spot in the running order when they conducted their first pit stop of the night. In addition to providing four fresh tires and fuel, the crew administered a track bar adjustment in an effort to steady the car's handling. The required changes caused the No. 54 team to lose one position off pit road and restart the race from the fourth position.

The KBM team took their first lead of the night when Busch made an exciting three-wide pass on leaders Logano and Hamlin. Busch maintained first place for two laps before Hamlin regained the lead. Although the No. 54 team showed the fastest lap times of the field, they remained in the top-three race positions, awaiting another opportunity to address Busch's concerns for a still 'loose' machine. "The closing rate is incredible," Busch explained, as his higher speeds proved dangerous while approaching cars that didn't pace the field as quickly. Team spotter Tony Hirschman carefully guided the Las Vegas native as he approached the slower cars in the field, which allowed his driver to concentrate on reaching the leaders.

A green-flag pit stop at lap 92 gave the team another opportunity to make track bar adjustments, replace four tires and fill the Monster Energy machine with Sunoco fuel. The car's handling, however, didn't show enough improvement for the recent race winner. Fighting what he would remarked as "sideways loose," Busch endured a blown right-front tire and made contact with the wall coming off Turn 4. With damage to the No. 54 Camry, the team was forced to make their final pit stop of the night during a yellow-flag caution which was initiated by its frontstretch wall scrape. One initial pit stop was used to change tires and add fuel, and then a subsequent stop provided the opportunity for the team to repair damage to the right-side fenders and allow clearance for the tires. Since the team administered its stop before pit road was officially open, Busch was forced to start from the rear of the field for the first time of the night.

From the 18th position, Busch wheeled his machine aggressively for the chance to reappear in the top-10. The team would have to wait for the result as the NNS event endured two more yellow-flag caution periods and a green-white checkered finish, extending the race event to 151 total laps. Through some attrition upon a late-race accident and with great will power from the past Sprint Cup Series Champion driver, the No. 54 Monster Energy team completed the race in the eighth position, accomplishing their fourth top-ten finish of the year.

Logano went on to record his third NASCAR Nationwide Series victory of the season and 12th of his career, followed in the second-finishing spot by Hamlin. Brad Keselowski, Sam Hornish Jr. and Austin Dillon completed the top-five finishers. There were six caution periods for 32 laps of the race along with 13 lead changes across seven drivers.

Busch led two times for three laps of the event. The No. 54 Monster Energy team remains 11th in the Owner's Point standings, 86 points from the leader.